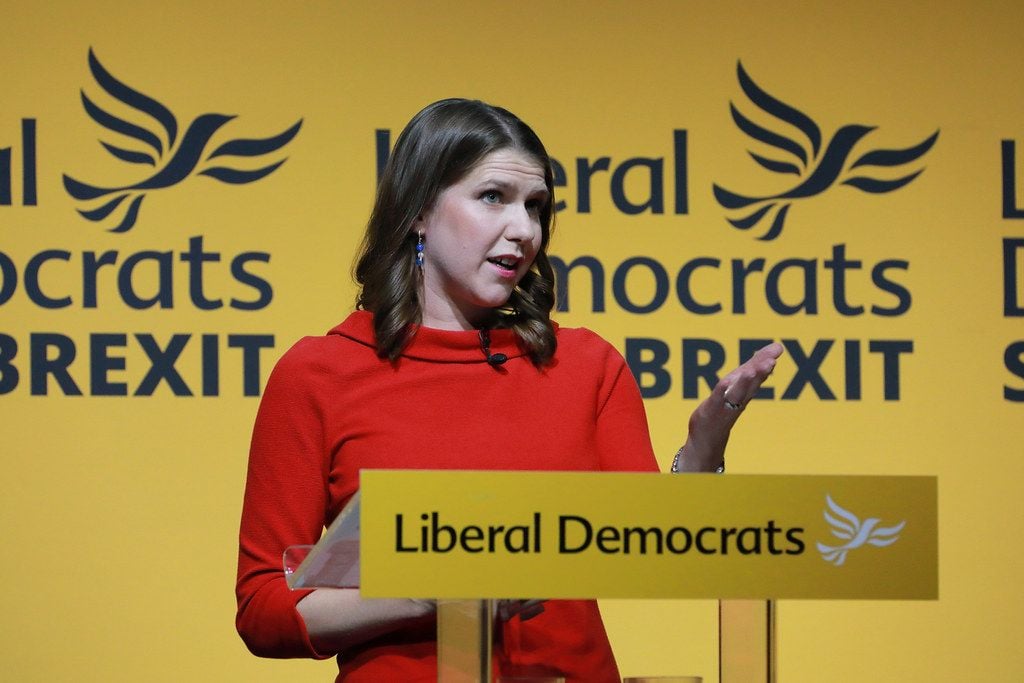 - GBP rises on "flextension', ahead of Commons election vote.

- Johnson receives lifeline as SNP and Lib Dems back election.

The Pound was on its front foot Monday after the EU granted a 'flextension' of the Article 50 period and amid speculation the Prime Minister has the numbers to trigger an early election, although technical analysts suggest the British currency can make further gains in the days ahead.

European Council President Donald Tusk said via his Twitter account Monday the EU 27 has agreed to the UK's request for an Article 50 extension and that a formal notice will follow. He made no mention of any conditions being attached.

The decision means a 'no deal' Brexit is off the table at least until after an election that's expected before Christmas. Prime Minister Boris Johnson is now said to have the numbers to force a vote, although he may need to compromise with opposition parties on the date of the ballot to win their support.

The EU27 has agreed that it will accept the UK's request for a #Brexit flextension until 31 January 2020. The decision is expected to be formalised through a written procedure.

"Delay to 31st January is not a huge blow for the economy, but by prolonging the uncertainty it’s an extra drag. The Budget, which was scheduled for 6th November, has already been postponed," says Paul Dales, chief UK economist at Capital Economics. "The economy [is] travelling along our “repeated delays” scenario, which envisages an easing in GDP growth from 1.3% this year to around 1.0% next year, and the pound staying close to $1.28." 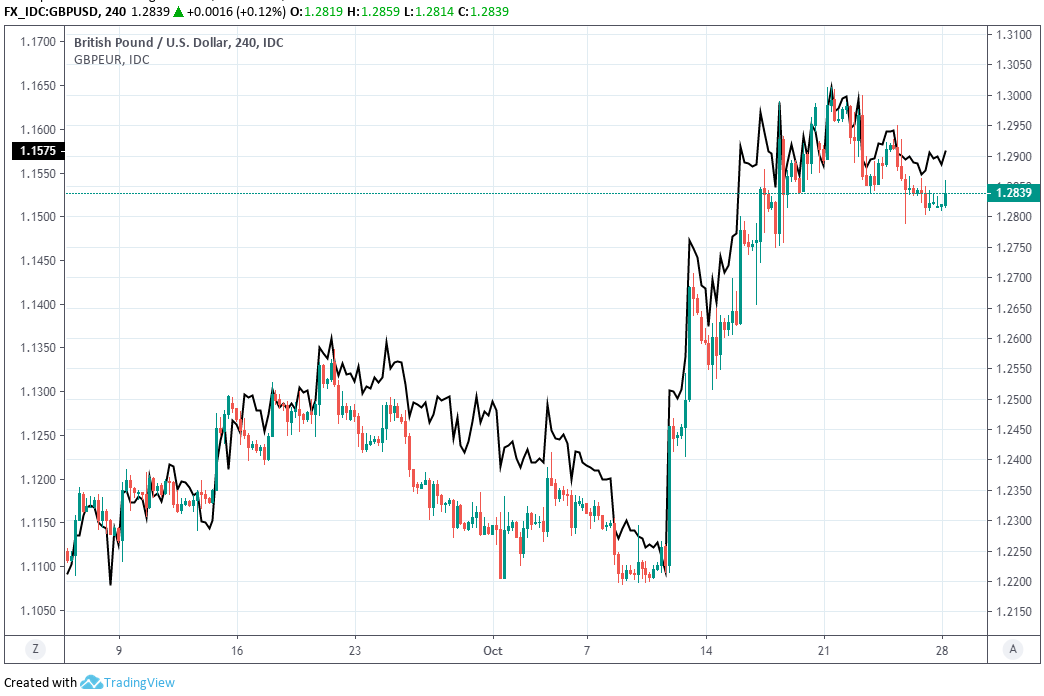 "GBP remains in limbo, weighed on by political uncertainty. The desk has a mild bias to buy on dips into the extremes. There is technical resistance into 1.2865/80, while to the downside there is minor support into 1.2800, ahead of 1.2750," says Michael Nair, a spot FX trader at UBS.

It seems China and the US are likely to reach a phase 1 deal. But this possibility didn't bring about optimistic expectations to the future ties.Some positive signs in Pence's speech didn't change that either. Majority Chinese are getting used to China-US ties stuck in deadlock.

Monday's price action came with markets trading in an upbeat mood after Chinese officials said at the weekend that progress is being made in the trade talks with the U.S., which has further eased concerns about the 'phase one' deal said to have been agreed between President Donald Trump and Chinese Vice Premier Li Hui on October 11. Trump claimed the deal had been struck, although it's yet to written and there's been reports of tensions about some details.

Nonetheless, and for Pound Sterling at least, it's Brexit that will dominate the agenda in the days ahead. The PM will hold a vote under the Fixed Term Parliaments Act (FTPA) Monday in the hope of securing an election for December 12, although the two thirds majority required for such a ballot means he needs support from opposition MPs. Some indicated over the weekend that they could back the Prime Minister.

A Downing Street spokesperson is reported to have told Paul Brand of ITV News; “Tonight is Labour’s last chance to have election with Brexit delivered - they can vote for 12th and get Brexit done before. If not, we will introduce a Bill almost identical to the Lib Dem/SNP tomorrow."

The governing Conservative Party has 288 MPs in parliament but it needs 434 votes in order to win. Liberal Democrat and Scottish National Party politicians hinted at the weekend that they could back an election so long as it's held on December 09 rather than the 12th, although they only have 54 MPs between them. Lib Dem and SNP support wouldn't be enough to win an election under the Fixed Term Parliaments Act, but would provide the PM a simple majority. 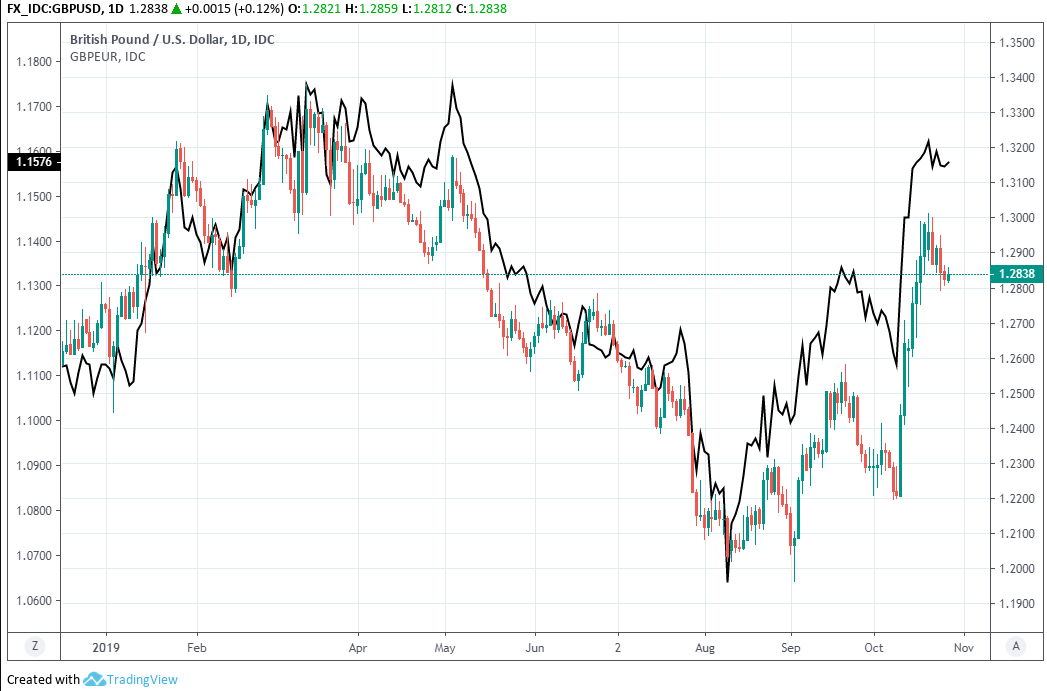 Boris Johnson and the Conservatives could pass a one line bill in parliament that circumvents the FTPA and still forces an election with just a simple majority. That would offer scope for Johnson to secure an explicit electoral mandate in favour of his exit plan, amounting to further progress in the Brexit saga that also ensures the threat of a 'no deal' exit remains low.

Downing Street has told The Telegraph; "We will look at all options to get Brexit done including ideas similar to that proposed by other opposition parties.”

Commerzbank's Jones says the Pound-to-Euro rate could correct downward on Monday but that its overall bias remains to the upside. She tips the exchange rate to hit 1.1667 and 1.1785 over the coming days, based on studies of technical indicators on the charts. 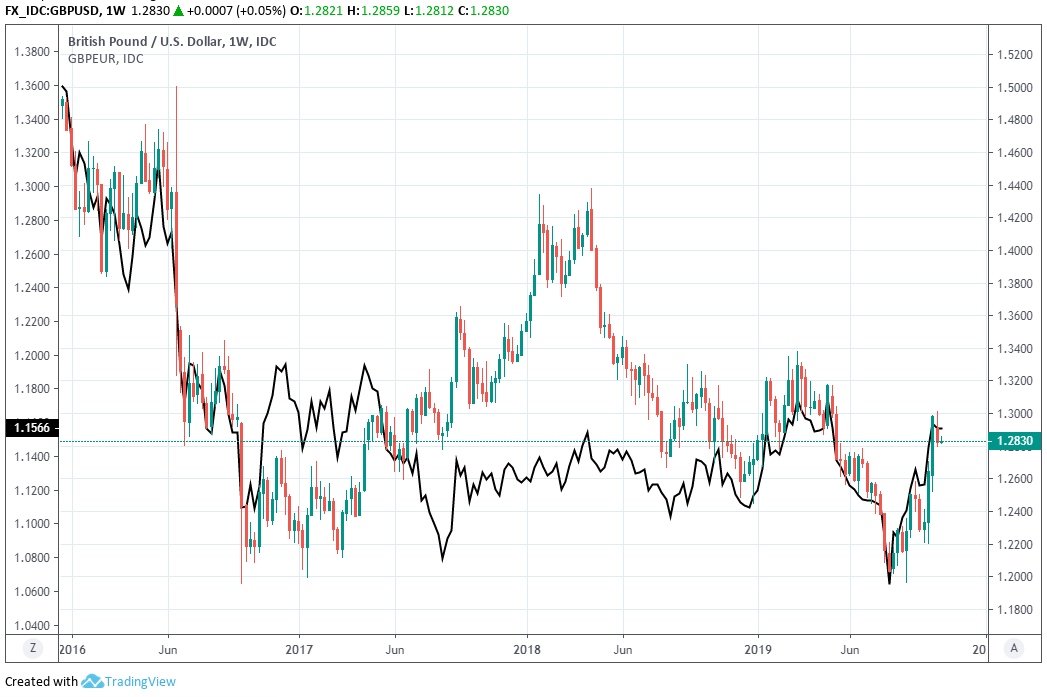 Pound Sterling is still the best performing major currency for the month of October but it came under pressure last week after MPs refused to support the Prime Minister's timetable for getting his Brexit deal through parliament. Markets were hoping the proposals would win support because passing the bill would decisively end the risk of a 'no deal' Brexit for at least another two years and the PM was initially said to have the numbers required.

Investors dislike the idea of any kind of Brexit at all but they're all-out allergic to the concept of a 'no deal' Brexit so any progress toward an amicable divorce is seen as positive by Pound Sterling. And there's now hope that parliament will eventually, before January 31 2020, approve what Prime Minister Boris Johnson claims is a new deal but which critics say is little different to or better than his predecessor's proposals. However, the outcome of a now-looming general election could yet change this outlook.

"Sterling is underpinned largely by the fact that a hard Brexit now looks unlikely. However, if we see a push for an election further uncertainty will creep in and we’re likely to see the pound fall back – likely towards 1.24 against the dollar. If the PM’s deal does get through parliament’  then we should see the pound push another leg higher,  towards 1.35 against the dollar. This bounce may be short lived though, as there are still lots of hurdles ahead," says Phil McHugh, chief market analyst at Currencies Direct.