Recent developments in the Brexit saga now mean the Pound will probably get stuck in a ‘wait-and-see’ sideways range for the foreseeable future, says Chris Turner, global head of strategy at ING Bank.

Although Boris Johnson won a majority in Parliament for his Brexit deal in a key vote on Tuesday, he failed to clinch an accompanying bill setting out an ambitious time-table for its implementation before October 31.

Markets reacted positively to the news that the UK Parliament had finally got behind a method for delivering Brexit but gains were offset by the news of his failure to win the vote for a speedy implementation.

The government has now had to seek an extension from the EU, and the next key development will be how long that extension is.

Johnson and his government will favour a short extension in order to prevent the house from voting through amendments to the withdrawal bill - such as the stipulation that a referendum would be required to have a ‘final say’ on the deal, for example - which could jeopardise Brexit altogether.

"Looking at the FX impact, the current situation suggests that: (a) more uncertainty is being priced back into GBP; (b) the downside for GBP still seems quite limited given that Johnson now appears to have a majority to back his deal. In turn, the Pound may drop some of the recent high volatility and get stuck in a “wait-and-see”, relatively tighter band, possibly hovering around the 1.28-1.29 area vs the USD," says Turner. 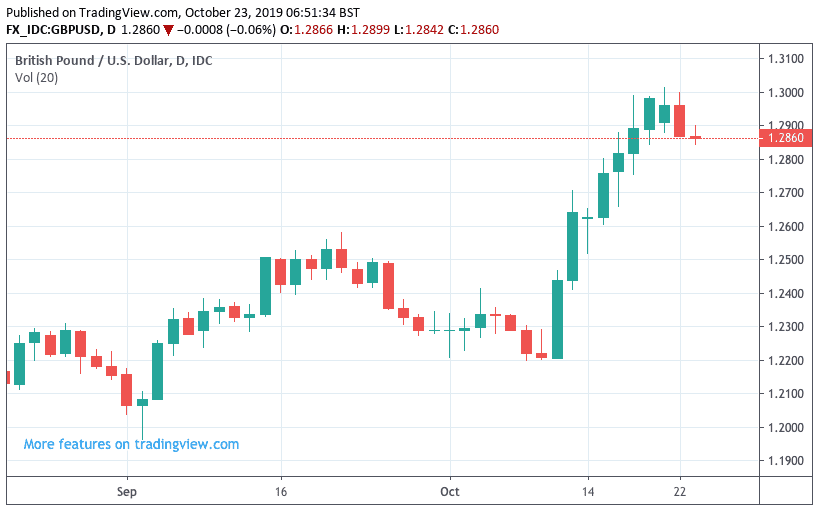 If the extension is too long Johnson could call a general election in the hope of securing a majority that will allow him to finally get Brexit through Parliament.

Current odds on whether he would win a majority show about an equal chance of that and a hung parliament, making it quite a risky strategy.

Other forecasters are more optimistic on Sterling, with Valentin Marinov, head of G10 FX research at Credit Agricole saying the Pound is now in an uptrend which is likely to extend and set-backs will provide opportunities to buy on dips.

“A no-deal Brexit is off the table, so the Pound is in an upward trend from here. We could see some retracement of the recent gains in Cable back down to 1.25 potentially... but I think there will be buyers on those dips. So ultimately we see the Pound higher from here over the longer-term - closer to 1.35-1.36, which would be our long term fair value without ‘no-deal’ Brexit; or it could get higher still,” says Marinov.

In the event of a general election, the conservative party is expected to come out on top because it has the advantage of a workable solution.

“As highlighted already the Tory party will be heading to that election determined to deliver Brexit, but also, and I think crucially having a plan how to do it,” says Marinov. "And I think that could convince a number of voters that have been flirting with the idea of supporting the Brexit party, in particular, to re-side and rally behind Boris Johnson, and I think the chances are that the Tories may be heading towards an election victory which will ultimately allow them to deliver Brexit with a slight delay."