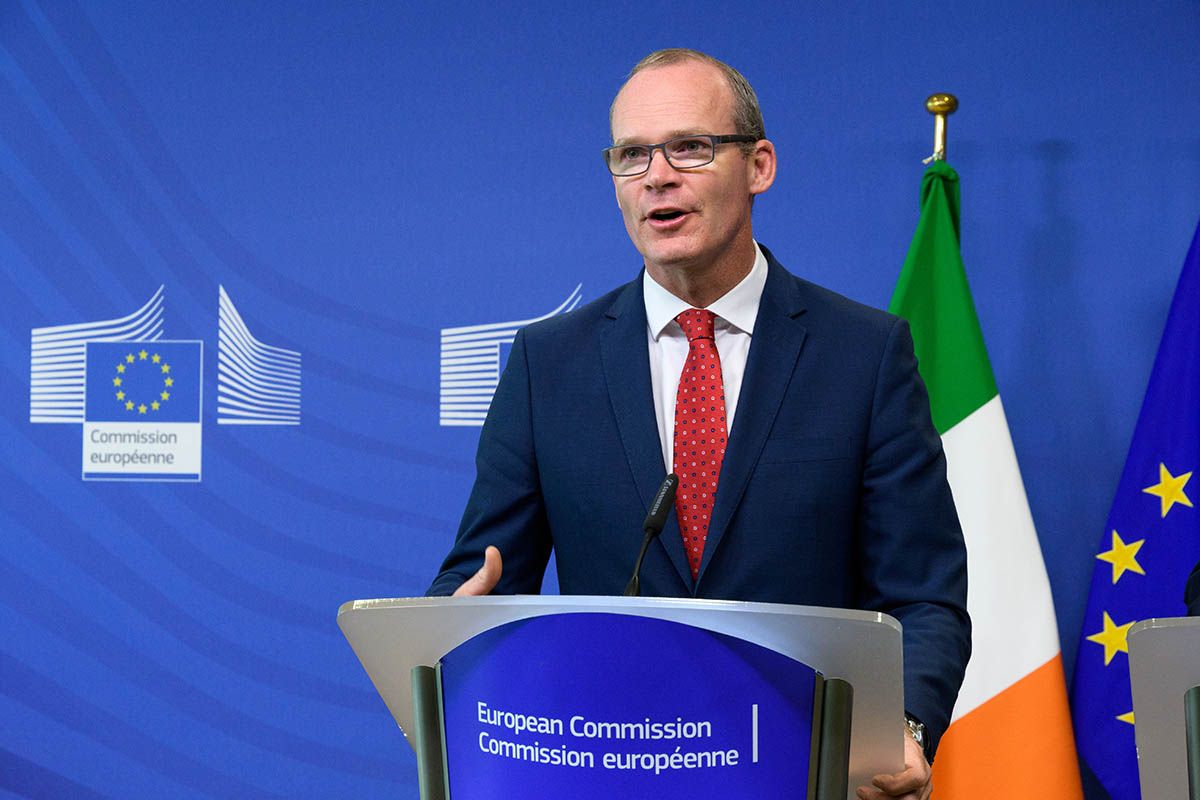 - New proposals to be submitted to EU mid-week

The British Pound starts the new month with a positive bias against the Euro, U.S. Dollar and other major currencies, with foreign exchange markets readying for the UK's submission of 'make or break' proposals aimed to break the deadlock over the Northern Irish border.

News reports suggest Prime Minister Boris Johnson will phone European capitals and spell out the details of the UK's latest proposals ahead of the submission of an official document. The process should begin following Johnson's speech to the Conservative conference Wednesday.

The initial response by the various European players should give an early taste as to whether the UK has submitted something workable.

A look at the state of the foreign exchange market suggests traders are as optimistic as might be expected given the multiple layers of uncertainty hanging over British politics.

The Pound-to-Euro exchange rate is quoted at 1.1292 on the interbank market, up 0.20% on a day-on-day basis while the Pound-to-Dollar exchange rate at 1.2296, up a more restrained 0.10% owing to broad-based Dollar strength. Big gains are seen coming against the Australian after the Reserve Bank of Australia opted to cut interest rates again.

"October will be a crucial month for the British Pound, so the currency may be even more vulnerable within the coming days and weeks. In case the UK government submits adequate proposals to the EU, a breakthrough might be imminent," says Marc-André Fonfern, analyst with MAF Global Forex.

Ahead of the delivery of the official documents, the Irish state broadcaster has leaked the details of a set of exploratory documents aimed at gauging the European response to more detailed plans.

The exploratory documents revealed plans to avoid the establishment of a 'hard' border between Northern Ireland and Ireland by establishing "customs clearance centres" on both sides of the Irish border would replace the 'backstop'. The backstop is a clause in the existing Withdrawal Agreement that guarantees there would never be a hard border between Ireland and Northern Ireland, however if it is ever invoked the UK would in effect be a satellite state of the EU, forced to accept its single market and customs rules.

Ireland's public broadcaster RTÉ reports the "centres", effectively customs posts, would be located between 5-10 miles "back" from the border.

Johnson has however denied plans will see the establishment of "custom posts".

Details of the ideas were presented during recent technical talks between UK and European Commission officials.

The ideas have however been panned by Ireland. Simon Coveney, Ireland's Deputy Prime Minister and Minister for Foreign Affairs and Trade described the UK's efforts as a non-starter:

"Non-Paper = Non-Starter. It's time the EU had a serious proposal from the UK Government if a Brexit deal is to be achievable in October. Northern Ireland and Ireland deserves better. 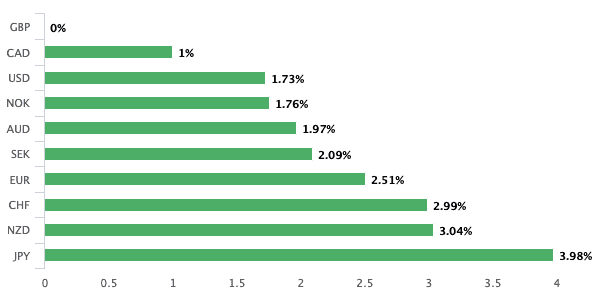 Above: Sterling was the best performing major currency in September as the prospect of a 'no deal' Brexit diminished

According to Elsa Lignos, a foreign exchange strategist with RBC Capital Markets, the UK's proposal would leave Northern Ireland in the UK customs territory for industrial goods, with selective alignment on EU food safety & animal rules.

"In a nutshell, it would mean replacing the border with a 'border area' the size of Luxembourg. There is no official EU response yet as this is not yet an official UK proposal. But a proposal in line with the leaked details has already been rejected by Irish political parties north and south of the border and seems unlikely to be the blueprint for a deal," says Lignos.

The analyst adds these developments could leave the UK closer to a 'no deal' exit "and a fraught election".

"GBP is still trending lower from its September 20 high; we think weakness has further to run," says Lignos. Those with currency transfer requirements who are looking to lock in current levels in Sterling ahead of any potential downside heading into the crucial October period are able to secure GBP/EUR rates around 1.1230 and GBP/USD rates around 1.2230 with independent currency providers, while margins on transfers from bank accounts are quoting notable lower for both pairs.

The Irish border developments come as Prime Minister Boris Johnson seeks to deliver a Brexit deal as a way to avoid having to ask the EU for another Brexit extension come the end of October.

We maintain the view that a Brexit deal remains the clearest path towards a sustained recovery in the value of Pound Sterling, and we would suggest a delay would offer more sideways trade in the currency.

Despite the ongoing uncertainty surrounding the agreement of a new Brexit deal, the prospect of an all-out slump in the Pound has diminished of late as the odds of a 'no deal' Brexit have decreased over recent weeks. There appears little by way of legal headroom for Johnson to circumvent the Benn Act, the law which requires the Prime Minister to ask for an extension if a deal or 'no deal' have not been approved by Parliament by October 19. 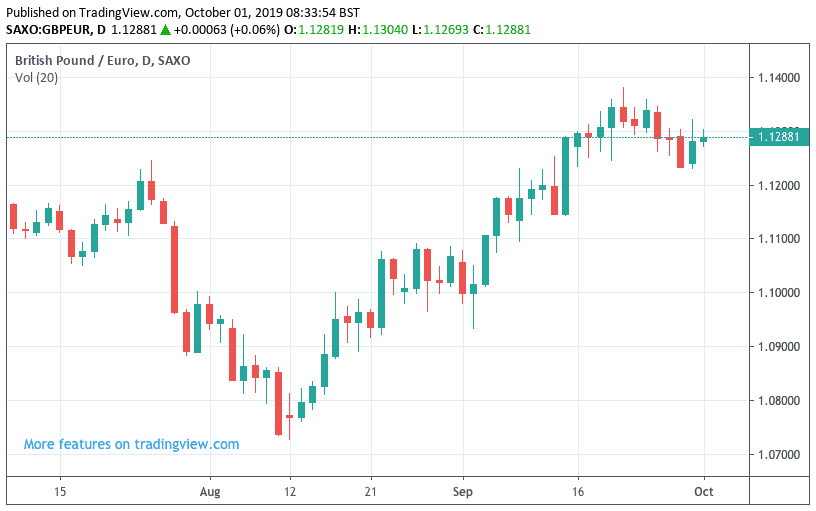 Above: Sterling's rally against the Euro is fading as markets await what could be a potentially explosive month for British politics

Media reports today confirm the UK will submit its official proposals to the UK within days and the reaction to the reports could well prove to be significant for Sterling.

There is a chance that the UK was seeking to 'test the waters' with the Irish border plans, in order to finesse a final proposal.

Note too that Coveney's initial reaction to the RTE report does not necessarily touch on the substance of the report, rather the nature of the report.

The Times this morning reports Johnson will ask the European Union to rule out a Brexit extension as part of a new Brexit deal.

The report says he has made clear to those in his inner circle that an agreement should include a commitment from the 27 other EU nations that they will not allow another Brexit delay.

The setup allows Johnson to confront MPs in Parliament with a binary choice of agreeing the revised deal or ensuring that the UK falls out of the EU without agreement at the end of the month.

"If he succeeds, the prime minister will, in effect, nullify the Benn Act, which compels him to seek an extension to Article 50," says Francis Elliott, Political Editor at The Times. However we would be wary of the EU agreeing to such a plan, and expect them to opt to keep a Brexit delay as an option to avoid a disruptive 'no deal' Brexit.

With no other obvious options available to circumvent the Benn Act and deliver on his promise of a Brexit by October 31, we would imagine Johnson would resign before requesting a Brexit delay, leaving it to another UK Prime Minister, or even a representative of the Government, to request the extension.

While this outcome would prevent a 'no deal' Brexit it does not solve the Brexit question and a General Election only serves up fresh uncertainty. Another Conservative government would feel emboldened to pursue a 'no deal' Brexit if the EU refuse to budge on their negotiating red lines. A Labour government would leave the UK a socialist state and open up an entirely new set of issues for the economy to face. Meanwhile, a hung parliament, where no party has a majority, would only leave UK politics where it is now: a country lead by an unstable government without a convincing mandate to deliver any form of Brexit.

This thick political soup leaves little clarity for a sustained move in Sterling, either higher or lower, we believe.