The latest UK labour market data has beaten expectations, and should provide Sterling with some short-term support but we remain of the view any strength in the currency should ultimately remain limited in nature.

According to the ONS, Average Earnings - excluding bonuses - read at 3.9% in June, ahead of economist forecasts for a reading of 3.8% and the previous month's reading of 3.6%.

The Average Earnings Index - with bonuses included - for June read at 3.7%, in line with economist forecasts but above the previous month's 3.5% which was itself revised higher.

And, the better-than-expected numbers extended to the employment statistics where it was shown the UK workforce grew 115K on a the three-month-on-three-month basis in June, markets had only expected growth of 65K.

"While much of that was part-time employment, it is encouraging that firms have retained their workers, suggesting they expect activity to pick up again following the Brexit hangover in Q2," says Andrew Wishart, UK Economist with Capital Economics.

The UK unemployment rate nudged up unexpectedly to 3.9% in (the three months) to June. Consensushad been for a steady rate of 3.8% for the fourth consecutive month.

When it comes to currency markets, deviation from expectations move a currency, and the best on expectations should therefore be supportive of Sterling. 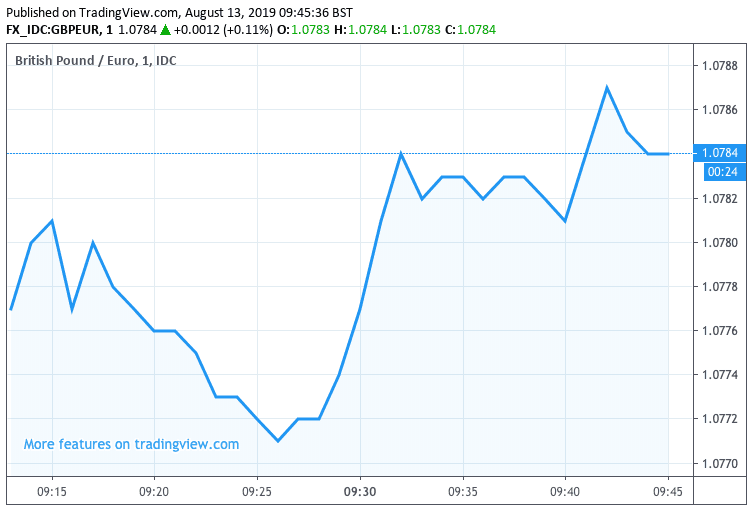 Sterling remains heavily dependent on Brexit sentiment at present, and we are therefore not expecting any gains in the currency to be long-lasting in nature.

"We view any days of GBP strength as a fade and see more sterling weakness ahead as we get closer to potential early elections, a road to which will still be very tricky and characterised by hard Brexit risks," says Petr Krpata, a foreign exchange analyst with ING Bank in London.

Nevertheless, news that the UK's labour market continues to provide jobs and better wages will serve to underline the robust nature of the UK economy ahead of what promises to be a tumultuous autumn in British politics.

The labour market statistics will go some way in calming nerves over the state of the UK economy following the release of disappointing GDP data out last Friday which triggered a sizeable move lower in Sterling that culminated in the GBP/EUR exchange rate testing 10-year lows towards the end of the session.

The move lower in the Pound served as a reminder to markets that the UK currency can still be swayed by economic statistics in these days dominated by Brexit.

However, an apparentl lack of upside in Sterling following the labour market statistics will confirm that the currency is pointed in a downward direction and is more responsive to news that confirms this bias.

A solid labour market report: employment up 0.4% q/q in Q2 and wage growth at fastest rate for a decade. True, lab market lags, but firms have been living with Brexit uncertainty for the best part of a year and still have hired more. PMI data point to solid emp gains in H2: pic.twitter.com/QYXgyrhjZt

Following the release of the labour market data, Marc-André Fongern, a FX strategist at MAF Global Forex says Sterling represents good value at current levels for those with long-term horizons:

"Although I assume that the Bank of England might cut interest rates before the end of this year (global economic slowdown), regardless of whether the UK leaves the EU with or without a deal, the historically cheap currency offers an attractive long-term opportunity."

Looking ahead, many economists suggests June marked a high-water mark for the UK labour market, and some softness might be likely going forward.

Capital Economics' Wishart notes demand for workers is cooling as the economy slows, and vacancies fell for a sixth consecutive month in July, while evidence from the REC Report on Jobs and the Employment PMI are consistent with a slowdown in employment growth in the near term.

However, any slowdown is expected to be shallow in the event of a negotiated Brexit.

"Oour conclusion is that labour demand is softening modestly, but that historically low levels of unemployment are likely to prevent a significant dip in pay growth. Of course if the UK leaves the EU without a deal, this scenario becomes far from assured," says Philip Shaw, Economist at Investec in London..

Investec note the various labour market series are often ‘noisy’, probably due to the nature of the samples used by the ONS in computing the data.

"This makes it more difficult to identify trends and turning points. Indeed today’s figures show conflicting features, but on balance we take the view that collectively, the numbers confirm the pattern of the past few months, which is of some cooling in labour market conditions," says Shaw.