- But UK economy unlikely to slip into recession say economists

UK GDP statistics out on Friday have come in worse than markets had expected after it was revealed the economy shrank 0.2% in the second quarter of 2019.

Markets had been looking for the ONS to report the economy flatlined at 0%.

“Sterling has taken another pounding after the UK’s economy was shown to have contracted in the second quarter, adding to the economic woes on top of no-deal Brexit concerns," says Nigel Green, chief executive of deVere Group. "Should the UK leave with no-deal, the Pound is likely to remain weak for several years until the country and the EU readjusts." 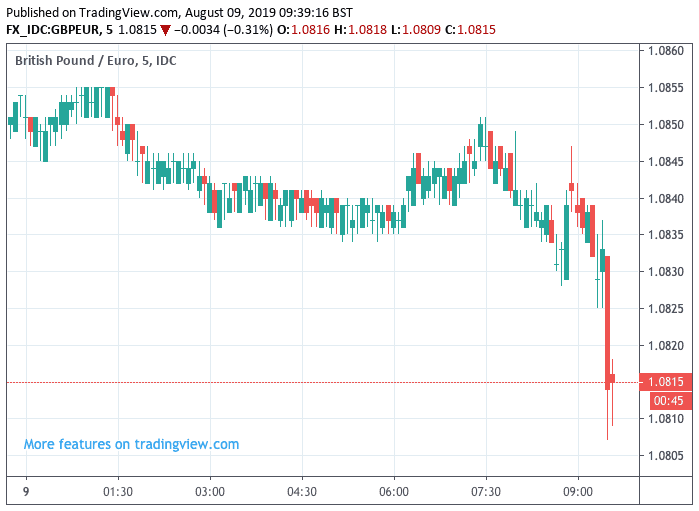 Should the UK economy shrink in the third quarter then it would have officially entered a recession as a recession is defined as two back-to-back quarters of economic contraction.

Year-on-year GDP growth stands at 1.2% reports the ONS, lower than the 1.4% forecast by markets.

“GDP contracted in the second quarter for the first time since 2012 after robust growth in the first quarter. Manufacturing output fell back after a strong start to the year, with production brought forward ahead of the UK’s original departure date from the EU," says Rob Kent-Smith, Head of GDP at the ONS.

“The construction sector also weakened after a buoyant beginning to the year, while the often-dominant service sector delivered virtually no growth at all," adds Kent-Smith. 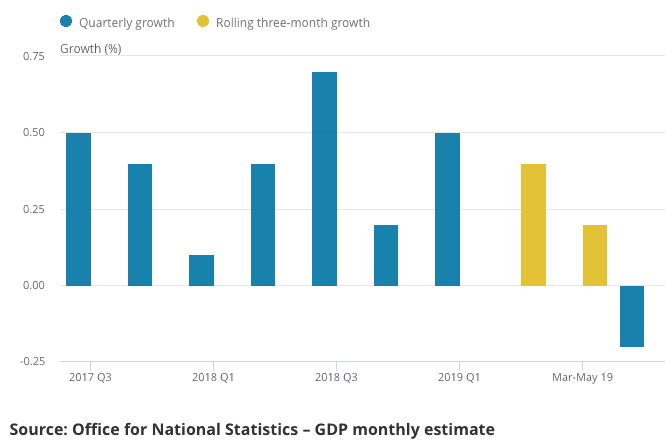 “It’s bad news for the new Prime Minister this morning as GDP for the last quarter came in below the meagre expectation of 0%. As a result, the Pound has dropped back to the yearly lows of last month. It is a reminder to businesses and market observers that the Pound can still react to market data like times of old, and is not trading purely on Brexit headlines. Looking forward, and whilst the House of Commons is still on recess, the next opportunity for the Pound to find some solace could come at the G7 summit in Biarritz over the August Bank holiday, but for investors two weeks can be a very long time," says Hamish Muress, Senior Currency Strategist at OFX.

Data also showed that business in the investment fell in the second quarter by 0.5%, worse than the 0.3% contraction markets were looking for.

That the economy and business investment are contracting in tandem will trigger assessments that uncertainty concerning Brexit is weighing on the economy.

The suite of data released today by the ONS certainly does not make for cheerful reading as industrial production for June fell 0.6% on a year-on-year basis. Manufacturing production for the same period contracted 1.4%. 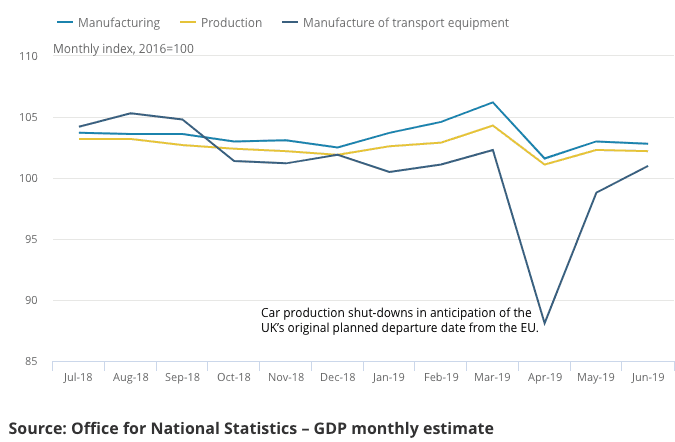 “With the EU so far refusing to re-open the withdrawal agreement and Boris Johnson’s government having committed to leaving at the end of October, a no-deal exit is looking increasingly more likely. Sterling is already trading at its lowest levels for two years against both the US Dollar and the Euro, having fallen by 8% since May due to markets re-pricing in a hard-Brexit. If the economy slips into recession, alongside the risk of a hard-Brexit and a general election, Sterling will likely suffer further losses," says Andy Scott, Associate Director at JCRA.

Looking Ahead, can we Expect a Recession?

As mentioned, the UK will be declared to be in an official recession should the third quarter show a contraction.

What are the chances of this transpiring?

“The contraction in economic activity over Q2 is concerning, but much of this is due to a number of one-off factors," says Alpesh Paleja, Lead Economist at the CBI. “Growth has been pushed down by an unwind of stockpiling and car manufacturers shifting their seasonal shutdowns."

Paleja says business activity has been "choked by a combination of slower global growth and Brexit uncertainty. As a result, business sentiment is dire."

“Securing a Brexit deal before the October 31 deadline is the first step to revving up the economy. The second is re-focusing attention on vital domestic priorities – such as pressing ahead with key infrastructure projects – to boost productivity and growth potential over the longer-term,” adds Paleja.

Samuel Tombs, UK Economist at Pantheon Macroeconomics says GDP growth should recover in the third quarter, he looks for a 0.4% quarter-on-quarter print—as the impetus from stockpiling turns positive again and as growth in households’ spending remains strong.

"Consumers have cash in their pockets—wage growth is at an 11-year high, surveys point to further increases in employment and inflation is on course to fall below the 2% target later this year—and their above-average level of confidence suggests they will spend. In addition, growth in government spending should retain its current momentum, given the new government’s zeal for fiscal loosening," says Tombs.

However, the economist says business investment likely will fall at a faster rate in the second half of 2019 in response to the renewed rise in the probability of a 'no deal' Brexit, but at just 9% of GDP, falling capital expenditure won’t do much to subdue overall GDP growth.