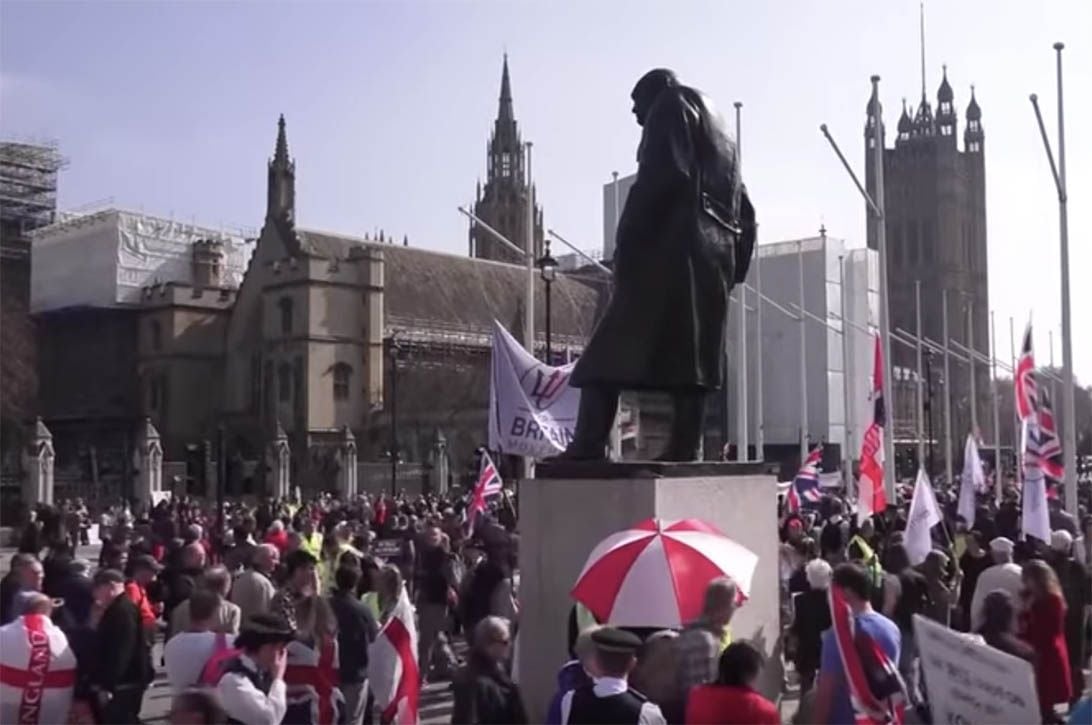 - Odds for 'no deal' Brexit have ample room to rise

- Expect further downside pressure in Sterling as a result

The British Pound came under further significant selling pressure ahead of the weekend with a fresh sell-off being triggered by news that UK economy contracted by 0.2% in the second quarter of 2019, which is greater than the 0% reading markets had been anticipating.

The data appears to have triggered another broad-based sell-off in a currency that has been under pressure for some months now with markets using Sterling as a conduit to express nerves over a possible 'no deal' Brexit transpiring on October 31. Indeed, we believe the GDP data is not the real story behind the ongoing sell-off, rather it is a function of ongoing attempts by the market to pre-position for a disruptive Brexit.

The Pound-to-Euro exchange rate is quoted at 1.0778 at the time of writing on Friday while the Pound-to-Dollar exchange rate is quoted at 1.2073. Both currency pairs remain in close proximity to breaking through to fresh multi-year lows and there is the potential for substantial further losses to be realised according to the latest market gauges of potential Brexit outcomes.

A Reuters poll of economists has shown a 5% rise in expectations for a 'hard' Brexit over the last month, with results from the August poll showing 35% of economists interviewed think a ‘no-deal’ will happen compared to only 30% in the July poll.

Bookmakers are also adjusting their odds to reflect a higher chance of a hard Brexit, with Betfair raising the probability of a ‘no-deal’ to 38%.

"As the political risk premium rose, GBP was the worst-performing G10 currency in each of May, June and July, but the negative risk premium can still rise further," says Adam Cole, a foreign exchange strategist with RBC Capital Markets.

The striking takeaway from the market's judgement for a 'no deal' Brexit is that probabilities for a 'no deal' can go materially higher, and therefore the potential for further Sterling declines is sizeable. In short, the market still favours an eventual agreement between the EU and UK being found and there might come a time when that assessment tips into an outright belief that a 'no deal' will transpire.

"We still think it is more likely that Johnson is simply bluffing and is not going to take the risk of leaving the EU without an agreement. However, it cannot be ruled out that he will play poker until shortly before the deadline of 31 October in order to exert maximum pressure on the EU. The risk in this case is that the depreciation of the pound will develop into a self-reinforcing downward spiral," says Thu Lan Nguyen at Commerzbank.

The risk is that Prime Minister Boris Johnson is not bluffing, and he does stick to his word to deliver a Brexit "no ifs, no buts" on October 31.

Johnson on Thursday told the EU to “show common sense” on the matter of the current Brexit impasse, asking them to “show flexibility”.

Speaking to the BBC, Johnson confirmed his Government was in touch with EU counterparts "the whole time”.

He added the problem with the existing Withdrawal Agreement is the “antidemocratic nature” of the Northern Irish backstop, which would turn the UK “into a satellite state”. “It’s totally unacceptable,” said Johnson.

With the EU showing itself to be in no mood to negotiate over the matter of the backstop, it is understandable that markets are likely to show little enthusiasm for Sterling.

A rise in the price of 3-month Sterling currency option contracts, which investors use to hedge the possibility of a tumble in the Pound, have increased substantially: “they’ve seen huge gains, but still below previous highs,” says Richard Pace, an options analyst at Reuters.

The growing popularity of ‘put’ options, which have seen their premiums rise recently, is especially indicative of increasing fears there will be a 'hard' Brexit since put options are bearish bets which allow their owners to sell at a ‘higher’ price in the future. If the market tumbles they can still offload their options at a favourable price, making a profit in the process. This is why they are used to hedge exposure if Sterling falls, as would happen in the event of a ‘no-deal’ Brexit.

The chart below shows the balance of put to call volumes for various durations of options - from 1 month to 12. It shows how the 3-month option contracts are seeing increased demand for puts above calls. 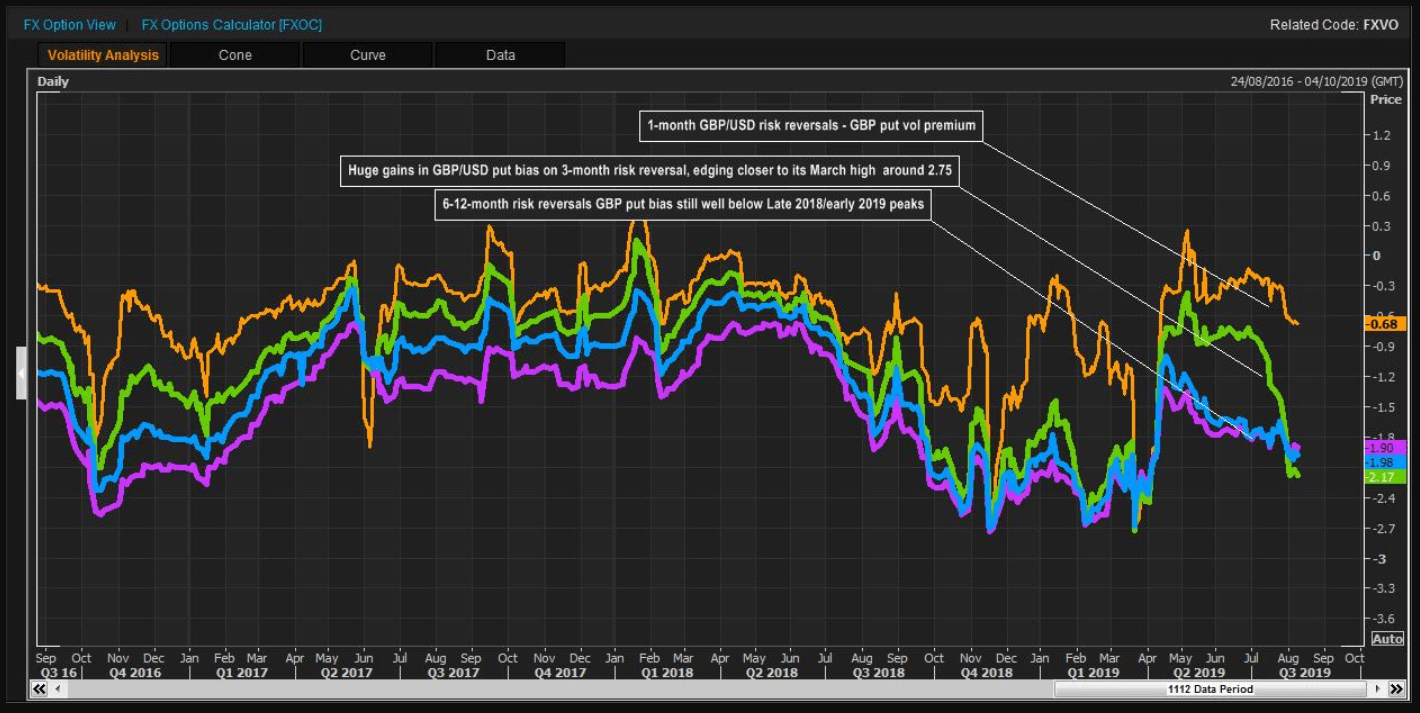 Despite their increasing cost, put option premiums are not yet at their March highs.

Options allow their holders the option to buy or sell the currency at a set price (called the strike price) in the future if they so wish.

The increase in the probability of a hard Brexit has come about as a result of the hard-line Johnson and his cabinet have adopted in Brexit negotiations with the EU.

He has repeatedly asked the EU to reopen negotiations on the Brexit deal and demands that the Irish backstop be removed.

“We need change on that. Once we get change on that, we’re at the races and I think there is a good deal to be done," Johnson told the BBC on Thursday.

The backstop would kick-in in the event no solution could be found during the transition period for keeping the border open between Northern Ireland and the Republic.

The backstop is unacceptable to many Brexit voters in the UK as it means the UK remains in the EU customs union and single market, but with absolutely no say on EU policy.

The backstop lessens the incentive for the EU to reach a solution to the Irish border question, as failure to find a solution results in a good outcome for the EU and the Irish Republic in that the UK stays in the single-market and customs border.

However, placing a time-limit on the backstop incentivises the UK to let the clock run down on any future negotiations.

"Regardless of whether Johnson will go through with a no-deal, the threat of it is likely to remain ‘on the table’ for the remainder of the period until the deadline on October 31 for no other reason than as a negotiating tactic," says Richard Harris, the CEO of Port Shelter.

Of course there is also the possibility that Parliament will unseat the Johnson government using a vote of confidence and take over the Brexit process, preventing a ‘no-deal’ from happening altogether.

The probability of this happening, however, is now dwindling since even if Labour brought a motion of no-confidence in the government on the first day back from the Summer recess, there would probably not be enough time to hold an election before October 31, says Reuters.

The incumbent prime minister also has discretion in choosing a future date for the election and if Johnson wanted he could wait until after the UK had left the EU to hold an election defeating the object of the confidence vote altogether.

“There are legal restrictions setting out a minimum period before an election can take place after the government loses a no-confidence vote, but not on the maximum period before one needs to be held,” says Reuters.

“The House of Commons Library, the parliamentary authority on process and procedure, says election law “gives the prime minister broad legal discretion about when an early general election should take place”.