- GBP could receive a boost from any BoE "hawkishness" on Thursday.

- An inflation-fearing BoE looking to hike, as others cut, is GBP-positive.

- But economists are divided over whether BoE will ever actually deliver.

The Pound has received a pasting on the currency market in recent months but could find some welcome support if the Bank of England (BoE) continues to warn Thursday that borrowing costs will have to rise over the coming quarters, but analysts and economists are divided in their outlooks for UK interest rates.

Pound Sterling has fallen steadily since the beginning of March, with losses accelerating last month upon the resignation of Prime Minister Theresa May. Fears about the Brexit process and a perception by the market that an EU exit will lead to lower interest rates in the long-term than would otherwise be the case explain the weakness.

However, the British currency could earn some welcome respite this week if the Bank of England continues to dangle before the market the prospect of higher interest rates when providing its latest update on the outlook Thursday at 12:00.

The BoE has long said rates will have to rise further in 2019, 2020 and 2021 if the consumer price index is to remain in line with the 2% target. Most analsts say it will continue to bang that particular drum this week, although they're divided over whether the bank will actually deliver on its pledge any time soon.

"The recent jump in wage growth points to underlying services inflation rising further over the coming months. As interest rate changes only affect the economy with a lag and core goods prices aren’t falling like they did throughout the 2000s, the MPC won’t wait until underlying services inflation reaches its pre-crisis norm of 3.5% before raising Bank Rate again," says Samuel Tombs, chief UK economist at Pantheon Macroeconomics. 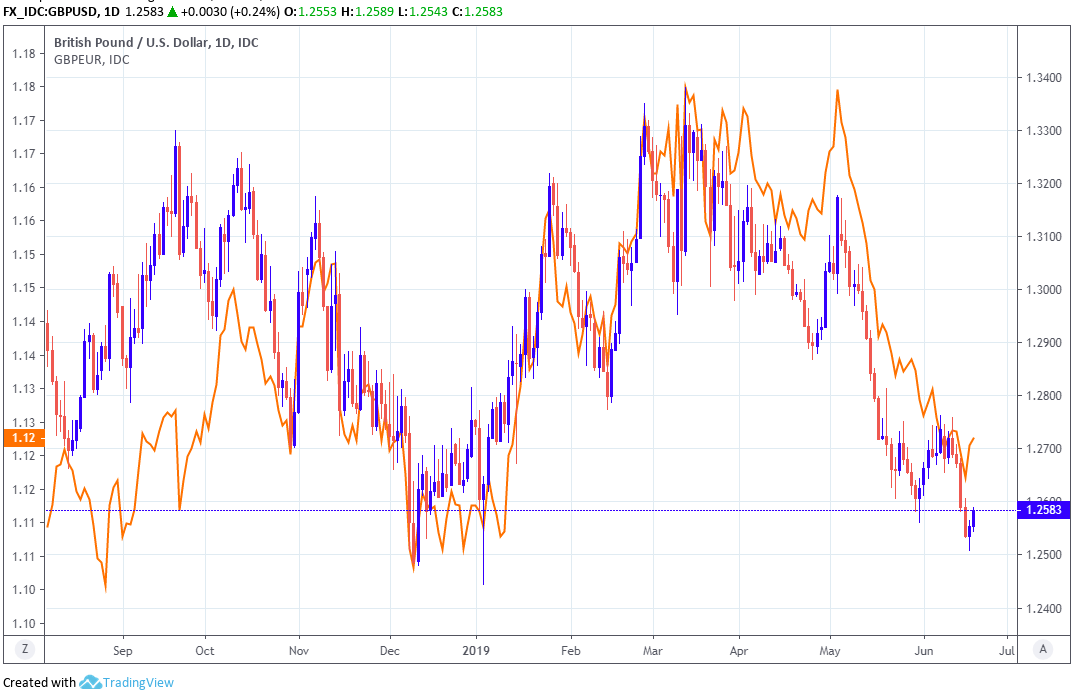 Tombs, who's been ranked by both Bloomberg and Reuters as the UK's top inflation forecaster, says Wednesday's inflation figures mean the BoE is likely to reiterate its "hawkish" message after Thursday's interest rate meeting and that it will lift interest rates before the year is out.

That message might provide the Pound with a boost this week, especially as so many other central banks across the developed world are now either cutting their interest rates or warning markets that they could do so in the near future.

UK inflation came in at 2% for the month of May, down from 2.1% previously and bang in line with the BoE's 2% target. Core inflation, which is seen as a truer reflection of domestic price pressures because it ignores trend-distorting energy, alcohol and tobacco items, fell from 1.8% to 1.7% when consensus was looking for a decline to 1.6%.

"There is effectively less cumulative easing priced into the GBP OIS curve than its corresponding USD counterpart. The MPC's assertion that it can move policy in "either direction" depending on Brexit circumstances is an important reason as to why this is the case," says Stephen Gallo, European head of FX strategy at BMO Capital Markets. "We can't see why the Committee would choose to drop its flexible stance as early as this week while so much of the UK's political environment is in flux."

Changes in interest rates are only normally made in response to the inflation outlook, which is sensitive to growth, but impact currencies because of the influence they have on capital flows and their allure for short-term speculators.

Central banks across the G10 universe have either cut their interest rates this year or hinted that they could do so over the coming months, with the Bank of England and Norway's Norges Bank being the only acceptions. That potentially leaves the Pound well positioned to capture international capital driven out other jurisdictions by rate cuts. 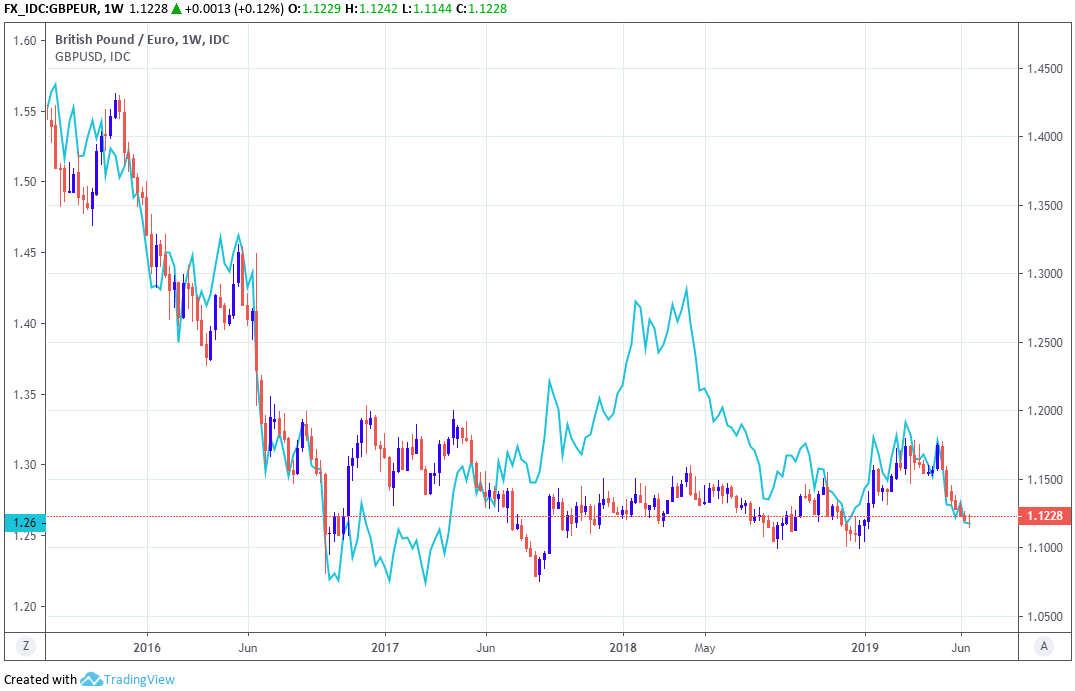 "The BoE may stand out as a Central Bank that is poised to lift policy rather than increase accommodation," says Richard Franulovich, head of FX strategy at Westpac, in a note to clients Tuesday.

Franulovich told clients to sell the Euro-to-Pound exchange rate this week, in part because the European Central Bank (ECB) has suggested it could cut Eurozone interest rates over the next few months and potentially restart its quantitative easing programme, while the BoE keeps saying that it wants to raise rates. The U.S. Federal Reserve meanwhile signalled overnight that it too stands ready to cut interest rates, with markets now pricing in nearly three cuts for 2019,with the first potentially coming as early as July.

Franulovich says the market response to this policy divergence can drive the EUR/GBP rate down from 0.8950 to 0.8770 over the coming weeks, this translates into a Pound-to-Euro exchange rate rise from 1.1173 to 1.1402.

The response envisaged by Westpac is one that could ultimately play out across British exchange rates with G10 rivals but some analysts say the BoE is likely to leave financial markets empty handed once all is said and done, which would then hurt the Pound.

"It's not only Brexit which is clouding the picture facing the MPC. The global growth outlook is worsening, and the GBP is closely linked to that dynamic (Figure 1) owing to the large share of total exports in UK GDP," says BMO's Gallo. "We continue to favour selling rallies in GBPUSD, while any dips to 0.8800 or so in EURGBP would likely be a buying opportunity in that pair. However, we don't expect to see the MPC directly instigating GBP weakness as soon as this week."