Updated: The GBP exchange rate complex has come under pressure once 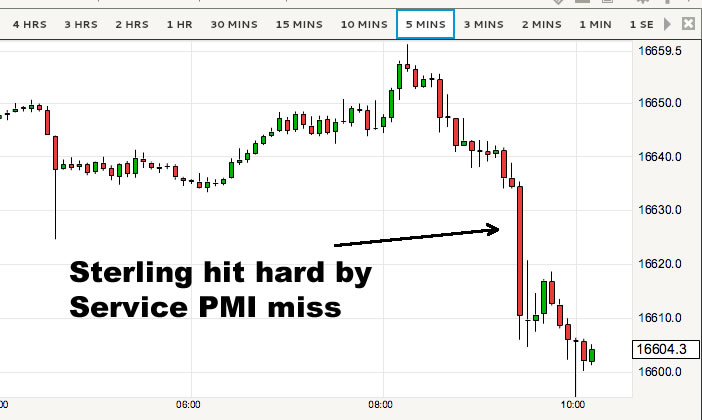 more at the start of April with the entire Markit PMI series missing the mark. However, many analysts continue to consider the latest price action as being representative of consolidative price action.

April will be pivotal for the UK unit - can the uptrend reassert itself or will we continue to see more of the same?

Jonathan Terela at Western Union on today's performance by the British pound (GBP):

"Momentum carried over into today’s trading session for the GBP—following the release of BOE’s quarterly Inflation Report as well as forward-looking statements—pushing the pound higher against the dollar. Traders see this momentum continuing through the day, as flow is coming across as bid heavy.

"The risk-off trade following the weak Australian employment report released overnight has caught some momentum coming into the NA session. A short-term support level appears at the 1.6620 mark, with resistance on the top side being at the 1.6680 level."

For those keeping an eye on the GBP/CAD, Shaun Osborne at TD Securities updates us:

"GBPCAD traded strongly Wednesday, extending the rebound that the market has been carving out recently through short- term resistance at 1.8230 via a bullish outside range day.

"We think the limited weakness in the GBP over the last couple of weeks despite the strong late January rejection of the 1.8550+ area is a testament to the durability of the underlying trend here. The small, rounded low which formed last week and earlier this week suggests strong accumulation of GBP on weakness. There remains a risk of a short-term setback after the recent buying but we expect near-term losses at least to remain limited and represent a buying opportunity. We continue to target a rise towards 1.92."

This note just in from Olympia Trust:

"Though it has successfully dodged headlines lately, the situation in Europe remains dire. An EU document has surfaced indicating that the European commission is looking for advice on drafting a law “to mobilise more personal pension savings for long-term financing”, read: every European citizen may face a sizeable haircut on their savings to help boost the economy and plug the funding gap the region faces in the wake of the financial crisis. The ongoing derailment in Europe can easily spur risk aversion in markets, weighing on equities and boosting the USD."

"The GBP/USD broke above the key 1.6600 level in today’s Asian session trade. Since then, rates have formed a base at that level and are trying to rally up to test resistance at the multi-year highs (1.6665). Given the major previous top at this level, rates may struggle to break through it on the first test, though a weaker-than-expected Retail Sales report could provide a catalyst to break above the key level." - Matt Weller at GFT.

"The price action in cable is interesting as the correction top (1.6668) is coming within reach.

"The overall performance of the dollar will play an important role whether this barrier might be conquered. Even so, in a short-term perspective this high profile resistance might inspire some (broad-based) profit taking on sterling longs.

"Concerning the near-term outlook for the euro sterling, Lammens says:

"Looking at EUR/GBP, the 0.8168/60 (correction low/62% retracement) support is key. After yesterday’s decline, a technical rebound is possible.

"However, we continue to see more pronounced upticks in this pair as a selling opportunity. In this respect, the performance of the euro will of course also be important."

"EUR/GBP is off the correction low in the 0.8180 area and tries to regain the 0.82 barrier at the moment of writing. This move is in the first place due to euro strength rather than sterling weakness," says Piet Lammens at KBC Markets.

"This morning’s London activity marked a decisive ‘flip’ from yesterday’s ‘risk-on’ tone, although there did not seem to be one single factor. Price action in a few of the majors like EURUSD, GBPUSD and USDJPY suggested poor liquidity was one factor. The weak Australian employment figures were also a factor, as it probably created bigger questions over the reliability of yesterday’s Chinese trade data. Real money buying in USTs and USD weakness also suggest that a weak US retail sales print for January is partially ‘in the price’ already." - Stephen Gallo at BMO Capital.

"As you are no doubt sick of hearing, I’ve been long and bullish GBP for some months now. I still think that EUR/GBP is headed to .75/.77 (1.33 and 1.298 in GBP/EUR terms) but what I’m not sure about is whether this move mainly happens through a higher GBP/USD or a lower EUR/USD? Probably a bit of both.

"I’m expecting cable to settle into a 1.64/1.68 range over coming weeks and I will happily book profits on my long position on any 150 pip intraday spikes."

ICN Financial have offered up this technical forecast for sterling:

"The pair moved sharply to the upside yesterday achieving the targets suggested in previous reports, as it is moving to the upside around top C of the alternative bullish harmonic Bat Pattern.

"Technical analysis rules shows that achieving more targets is related to breaching 1.6625 levels represented in top C, as we see negative signals on MACD and AROON is showing a weak upside move. We hold on to our positive expectations depending on the positivity of Linear Regression Indicators and stability above 1.6580."

09:41: Independent Scotland to be denied the use of Sterling

George Osborne is delivering a speech on Scottish independence and the problems with a currency union in Edinburgh.

Osborne says, on the basis of the official advice he has received, which is that they would not recommend a currency union, it is clear to him that he could not recommend sharing the pound with an independent Scotland.

"We view that, despite the Bank being keen to stress there remains ample spare capacity in the economy, a continuation of stronger domestic data will likely increase market expectation of early monetary policy tightening, this would push front-end yields higher and prompt GBP gains. With little on the UK calendar today, we expect optimism towards GBP to continue. We favour GBP/USD to the upside and looks likely to break the recent 1.6668 high." - Charles Diebel at Lloyds Bank Research.

"In his speech yesterday, the BoE Governor Carney said that the interest rates will remain at the historical low levels even if the unemployment rate reaches the 7.0% threshold. The UK jobless rate is expected to hit 7.0% by January.

"The above statement introduced a new phase in Carney’s forward guidance strategy (the day after tomorrow). As suspected, the speech revived anti-Carney trades. GBPUSD climbed to 1.6623. Next key technical level is the year high of 1.6668. EURGBP eased to 0.81802. The MACD stepped back in the bearish zone leading us to drop our tactical bullish view for a daily close below 0.8235.

Further gains for the British pound (GBP) against the commodity currency complex today. GBP/AUD is higher (pulling GBP/NZD alongside) owing to a weak labour market report.

Today’s labour force report for January was much weaker than market expectations for the second consecutive month. The unemployment rate rose to 6.0% which is the highest for a decade and above the peak reached during the global financial crisis. Employment also continued to decline.

Full-time employment fell further among both males and females suggesting broader weakness in the labour market than just in mining and related sectors.

Markets will now question the wisdom of the RBA's policy of keeping rates unchanged in 2014.

Kathy Lien at BK Asset Management says that if resistance is broken in coming sessions then we could see some impressive GBP/USD gains:

"According to the last CFTC IMM report, speculators have reduced long sterling positions but given the magnitude of the central bank's shift in strategy and outlook, they could revisit that trade. However from a technical perspective, there is quite a bit of resistance above current levels in the GBP/USD. The currency pair ended the North American trading session right below 1.66, a former resistance level.

"If this level is broken in a meaningful way, then the next point of contention is at the 2 year high of 1.6668 but before the currency pair can test 1.70, it also needs to break through former resistance at 1.6750. So don't expect smooth sailing to 1.70 for the GBP/USD. Instead better opportunities with less upside resistance that could potentially stall the rally can be found in the crosses."

Here are the main highlights of yesterday's coverage.

"Sterling is the outperformer on the day, following the BoE’s inflation report, which saw upward revisions to GDP forecasts, and sparking talk of interest rate hikes sooner than previously expected.

"Also, Governor Carney shifted focus to spare capacity utilisation in the economy from a determined focus on an unemployment threshold of 7 percent, with expectations that the slack in economic output to pre-crisis levels is not expected to be eliminated for another three years, albeit it at a faster rate than previously expected.

"All of this has pushed the GBP higher across the board, with scope for further gains against the USD above the 1.6600 level in coming sessions."