Has the British pound (GBP) found a floor or is this just a breather ahead of further declines? Will the Bank of England surprise markets and release a statement today? Pound Sterling Live seeks out the answers to all questions Sterling-related.

16:50: Traders waiting for a break higher in GBP before committing

"The technical picture for the pound is much the same as it was yesterday. Rates continue to consolidate around the 1.6300 level, with clear support sitting down at the Monthly S1 Pivot at 1.6275. Today’s Bank of England meeting has come and gone without any impact, so longer-term traders will continue to watch for a break of the recent 1.6275-1.6340 range before committing any additional funds."

"Traders seem to be coming in bid heavy on the GBP this morning, creating something of a floor for the North American (NA) session at the 1.6300 level." - Jonathan Terela at Western Union.

Deutsche Bank believe the ECB will eventually have to get more proactive in keeping Eurozone rates down, and this will have a significant impact on the euro.

"Even if no action materialises today and EUR/USD squeezes higher, we think the persistent risks to European inflation and the divergence between Fed/ECB policy should be worth at least 10 big figures of downside by year-end." - George Saravelos at Deutsche Bank.

14:57: No discussion of quantitative easing at ECB

Another reason why markets were unhappy and the euro was happy with today's ECB outcome:

"ECB President Mario Draghi indicated that QE was not discussed during their policy meeting, much to the markets disappointment. German equities are tumbling while the Euro is climbing higher." - Olympia Trust FX.

After having broken the 1.2 level the next stop is 1.19 in this fresh rout of the British pound by the euro.

The euro was sent higher and equities lower as ECB President Mario Draghi told markets he saw no deflation risks to the Eurozone.

Market hopes for more a more proactive approach to aiding the Eurozone economy have been dashed. Are we witnessing a sea-change in sentiment towards the euro?

The euro has shot through the roof as Mario Draghi addresses journalists in his post announcement conference. EUR/USD up 0.23 pct and EUR/GBP up 0.24 pct about to breach resistance.

The euro has witnessed selling pressure in the wake of today's ECB decision. No changes announced. We await the press conference from Mario Draghi, so things could get even more interesting.

We have just published a note on the 2014 forecasts for the pound / dollar exchange rate. This complements yesterday's note on the pound euro rate.

12:00: No changes at Bank of England, no statement released

Sterling rates have found a little bid after a non-eventful BoE policy meeting. The currency has bounced off morning lows. Next up is the ECB decision.

11:36: Sterling under selling pressure in approach to BoE

Equity markets are higher today but this has not reversed the decline in GBP. Indeed, as we approach the BoE decision at the top of the hour Sterling has come under fresh selling pressure. We note key support levels are being tested again. A break below here following the BoE will set us up for a poor February in our opinion, provided the Bank's Quarterly Inflation Report fails to produce hawkish guidance.

The Bank of England MPC decision due at midday could inject some life into a moribund sterling. However, be aware that we will have to wait till the ECB decision for insights into the EUR's direction.

Here are the levels to look out for post-BoE on the GBP/USD, courtesy of Alpari UK:

Regarding the GBP/USD we note activity remains subdued. Indeed, the same can be said for the broader pound exchange rate complex.

"Clearly there’s significant support around this level, which has also previously been a key level of support and resistance. However, the lack of buyers coming in is a bit of a red flag for sterling bulls. One reason for this could be today’s BoE announcement." - Craig Erlam at Alpari UK.

Geoffrey Yu at UBS offers us a thought on the EUR/GBP ahead of today's ECB and BoE decisions:

"If expectations of tighter relative policy by the BoE are confirmed, further EURGBP downside will likely remain a consensus view. While sympathetic to the direction, we stress that policy divergence in itself is not sufficient to guarantee the stated price action. Policy transmission and external factors will be just as important.

"Unless the ECB can execute a form of monetary policy which directly transmits into a sustainably lower level of EONIA, any drag on the euro will be temporary."

The following EUR/GBP projection is courtesy of Forex.com: 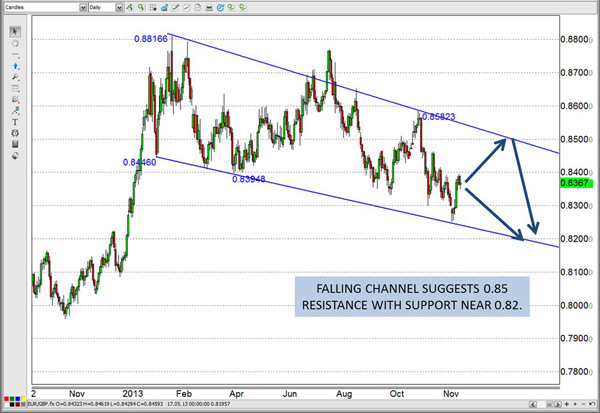 Keep an eye on the following levels today say Forex.com:

Regarding EUR/GBP: "The pair is looking trapped at the moment. We are waiting for a break out. The false breakout of 0.8305 may highlight some underlying weakness in the pair."

"The Cable consolidates losses above the 100-dma (1.6255) pre-BoE. The BoE is likely to keep the bank rate at 0.50% and the asset purchases target unchanged at GBP 375bn. No comments expected post-BoE. The policy decision is expected to have little impact on GBP prices." - Swissquote Bank.

The ECB meeting is the primary focus today, and there is some market expectation of some dovish action, though most analysts indicate that they expect no change.

"A cut in the refi rate looked like a possibility a few weeks ago, but with EONIA now better behaved it seems an unlikely and ineffective gesture. More effective would be some form of asset purchase scheme, but at this stage this seems to be too politically difficult to achieve. While dovish rhetoric can be expected, the rhetoric was already ramped up last time so anything other than action this time may be a mild EUR positive. Upside still looks fairly limited, but a move up towards the 1.3580 area may be seen." - Lloyds Bank Research.

What is driving the British pound at present? When will the selling stop, indeed has the UK currency found a floor? According to Lloyds Bank Research the answer to all this lies in risk:

"The slightly weaker than expected UK services PMI yesterday was supposedly slightly flood affected, but even if it wasn’t, the level of 58.3 remains very high and historically indicative of strong growth – stronger than the official data currently suggests.

"GBP’s weakness after the data consequently looks hard to justify, and was more related to the continued general risk negative tone than any GBP specific factors. We continue to see GBP as good medium term value at current levels, and even if there is scope for EUR/GBP to trade up to the 0.8350-75 area and GBP/USD to go down to the 1.6150 area in the short term, these should represent attractive levels for GBP buyers if risk appetite returns. Nothing is expected from the MPC meeting today."

Bank of England is main event for the British pound today

The only event specifically relating to the British pound (GBP) today is the February policy decision at the Bank of England (BoE) due at 12:00 GMT.

"We expect it to leave the bank rate at 0.5% and its stock of asset purchases at GBP 375bn. Markets are currently not expecting a statement to be released." - UniCredit.

The issuing of a statement is where the real risk would lie, however markets are currently not factoring this in as we have the Quarterly Inflation Report due next week where any new guidance will be laid out.