This is according to the EU’s Advocate General, in a submission to the European Court of Justice (ECJ).

The opinion from the Advocate General relates to an imminent ruling by the ECJ as to whether the UK can unilaterally revoke Article 50 and the Brexit process. The ruling was brought to the court by a grouping of MPs and MSPs who opposed Brexit and we believe should the ECJ follow the AG's advice 'remainer' MPs will be emboldened in voting against Theresa May's Brexit deal.

Records suggest the ECJ has followed the advice of the AG in 80% of cases.

The Sterling 'handbook' suggests that any move to a softer Brexit or no Brexit at all is positive, hence this could be a factor behind the firmer Pound.

"Sterling bulls got some much-needed encouragement on Tuesday when the European Court of Justice's advocate general said Britain has the right to unilaterally reverse Brexit, Advocate general opinions aren't binding, but the court tends to follow them in its final rulings – which in this case is expected 'quickly'," says Robert Howard, an analyst on the Thomson Reuters currency desk. "A ruling in line with the opinion would give the British government the option to revoke Article 50 before its scheduled exit from the European Union on March 29. That might buy time to hold a second Brexit referendum."

We are however sceptical that any strength in Sterling is sustainable.

The scale of the defeat of the government's Brexit deal in next week's parliamentary vote is likely to be a key driver of Sterling into year-end we believe; a large loss could be negative for the curreny as it draws into question May's ability to cling to power, a slight loss would suggest the deal could slip through on a second or third attempt.

The AG's advice to the ECJ only complicates matters further for the government and the entire trajectory of Brexit.

The officer is a neutral legal advisor to the courts, the ECJ has not yet said when it will rule on the case, but we would imagine the ruling is drawing closer.

The ECJ does not have to follow the Advocate General advice, "but normally does," says Robert Peston, ITV's Political Editor. "This will create a climate in Westminster that “all things are possible".

But, there's something in it for Brexiteers too. "Here’s a thought: will Brexiteers seize this as a way out of the backstop trap? If ECJ uphold advice, HMG could revoke A50 and then invoke it again the next day, resetting the clock for a new negotiation or an effective 2 year transition to WTO. Possibilities open up," says Tom Newton Dunn, Political Editor at The Sun.

For Sterling though, the news creates yet further uncertainty and the currency tends to perform poorly in a climate of uncertainty.

The ruling nevertheless does give retainers further reason to vote down Theresa May's Brexit deal, on the assumption that either a change in government, or change in leader might bring forward the case for exiting Brexit.

So while on paper staying in the EU is good for Pound Sterling, the road to such an outcome will be a treacherous one filled with uncertainty and this should weigh on the currency. 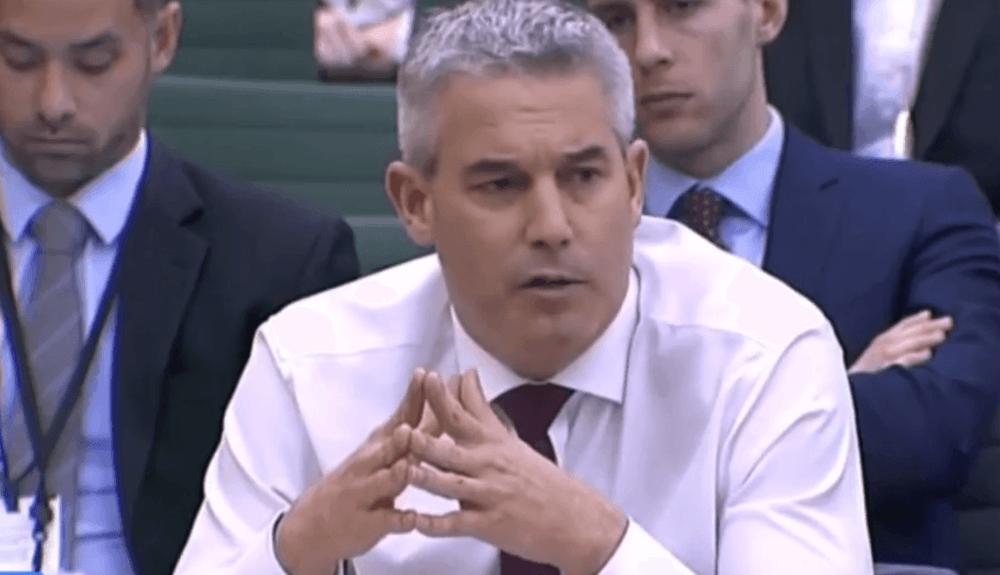 The Pound is beset by chronic uncertainty with investors unsure of what will come following the anticipated defeat of the Brexit deal with the UK's most senior Brexit minister Stephen Barclay saying there is no plan in place if the government fails to pass the bill.

"The honest answer is it's unclear," Barclay told a committee in parliament on Monday when asked what the next steps on a potential defeat are. "What I can be clear on is that the consequence of the vote not going through next week would be uncertainty for business, uncertainty for jobs."

Barclay and other senior government figures were appearing before the Exiting the European Union Committee. Asked if the vote would be cancelled in the face of widespread opposition, Barclay said: "No, I think the vote will happen on Tuesday."

Prime Minister Theresa May will urge parliament to back her Brexit deal today as a five-day debate on the Brexit deal commences.

The deal could well determine her own fate and whether Britain leaves the European Union without a deal.

May's plan to keep close ties with the EU after leaving has been criticised by Brexit supporters and opponents alike, leaving her struggling to secure parliament's approval in a vote that will follow the debate on December 11.

Sterling tends to perform poorly in an environment of uncertainty and it is little wonder the currency has been in decline since it became clear the deal struck between the UK and EU in December would unlikely pass through parliament.

The failure of the Brexit deal to pass through parliament opens the door to yet further uncertainty into year-end and beyond which is forecast to keep the UK currency under pressure.

"Brexit uncertainty continues to weigh on the Pound ahead of a crucial Commons vote next week," says Robert Howard, an analyst on the Thomson Reuters currency desk. "With a political storm approaching and year-end notorious for illiquid conditions and fragile risk appetite, Sterling may be the worst currency to hold."

Barclay also told parliament the government would be working hard to get support for the vote.

"Well I think it’s going to be challenging, I think everyone recognises that, and I think a great deal has already been said, but there is clearly time between now and the vote."

The Maths, why the Deal Won't Pass First Time

320 is the de facto threshold needed for the Government to pass the bill,

Estimates from Nordea Markets suggest around 145 MPs on the government's payroll (27 cabinet ministers/attendants, 65 on government payroll, 50 ministerial assistants and three whips) as well as roughly 75 Conservative loyalists will vote in favour of the deal.

In addition, one Liberal Democrat has confirmed he will support May’s deal.

That totals 221, the government therefore faces a shortfall of at least 99 votes to allow the UK to leave the European Union in March 2019 with a deal in place.

"The deal will not pass, if MPs vote as they say they will. This also seems to slightly be the consensus in the financial markets when looking at indicators such as GBP risk reversals, surveys and speculative sterling positioning," says Morten Lund with Nordea Markets. 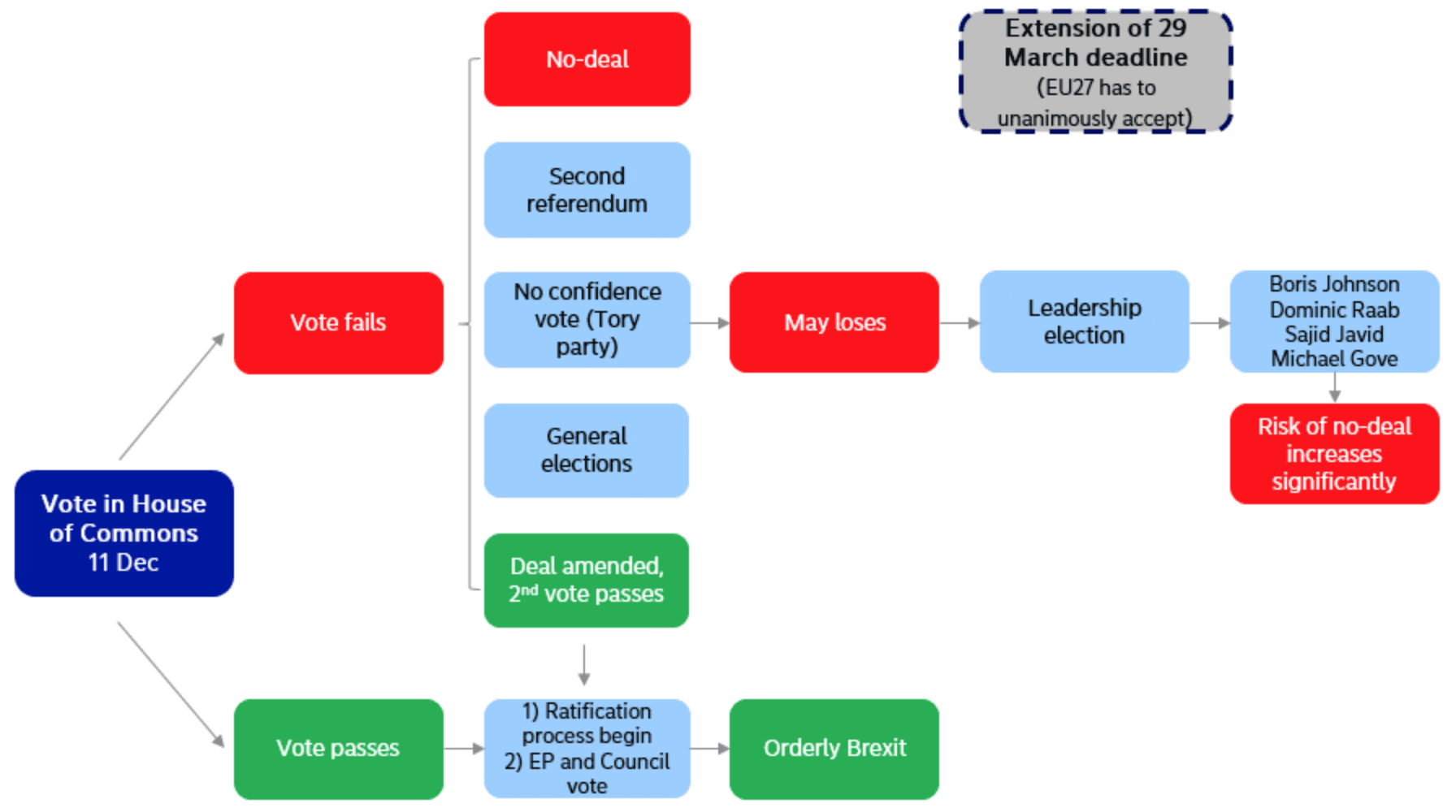 Above: What next? Image courtesy of Nordea Markets.

We believe a big driver for Sterling over the next two weeks will be the scale of the defeat suffered by the government. Some sources put the defeat as high as 200.

This would seriously undermine the Prime Minister and under such circumstances the prospect of her having to either step aside, or lose a confidence vote - either at the hands of parliament or her party - becomes greater.

The removal of May and the commencement of a leadership contest would be incredibly disruptive for Sterling and we see deep losses on such an outcome.

If the Prime Minister can get her vote through with a 'manageable' loss then the prospect of a second vote succeeding becomes all the more likely.

Should the defeat be narrow then expectations for the deal passing on a second vote increases: This would be good for Sterling we believe.

"MPs likely to back the WA on a second or third attempt, through gritted teeth," says Malcolm Barr with JP Morgan. "We continue to place a 60% probability on an orderly Brexit occurring in March or shortly after, based on the WA as currently configured."

Also on the Agenda

Bank of England officials - including governor Carney - will appear before parliamentarians from 09:15 GMT onwards. They will give evidence to the Treasury Select Committee on the financial stability report produced last week.

However, it will be the Bank's Brexit scenario analysis that will really galvanise interest. Recall, under one 'no deal' scenario the Bank envisioned a 25% decline in the value of Sterling?

Expect 'Brexiteers' on the Committee to take a robust line with the Governor, expect the governor to point out these are not in fact forecasts and it is incumbent on the Bank to be prepared for any eventuality that Brexit might throw up.

Datawise, we will be watching the release of the Construction PMI for November at 09:30 GMT.

The expectation is for a reading of 52.5 to be delivered.

The number will come on the heels of a better-than-forecast Manufacturing PMI reading released on Monday.

There was little reaction by Sterling to the number and we expect no reaction to the Construction PMI.