- But, UK financial system will handle worst of stresses

- Sterling could rise 5% if May's Brexit deal passes into law

A disorderly 'no deal' Brexit could crash Sterling, which would in turn force the Bank of England to hike interest rates sharply towards the 5.5% mark in order to combat inflation stemming from the currency's decline.

According to the Bank of England's latest Brexit analysis, aimed at testing the resillience of the UK financial system, if Prime Minister Theresa May fails to pass her Brexit plan Sterling would fall 25% under a worst-case scenario.

The Pound would fall below parity against U.S. Dollar and the Euro on such a decline and would almost certainly see a fall of equal proportions against other major currencies.

Above: Watch the Bank of England press conference.

These assumptions form part of the Bank's 'war games' designed to test whether the financial system it is ultimately responsible for can withstand negative scenarios.

They are not forecasts, they are not warnings and they are not numbers drawn up by Governor Mark Carney in some sort of conspiracy as a host of Brexit-supporting critics would like to suggest. The scenarios are in fact created by the Bank's internal staff of economists.

The disorderly variant is the more severe of the two that places the financial system under the most stress; "the term premium on UK government bond yields rises by 100bp. And as the Sterling risk premium increases, sterling falls by 25%, in addition to the 9% it has already fallen since the May 2016 Inflation Report," say the Bank of England.

Other impacts of this worst-case, disruptive, scenario include: 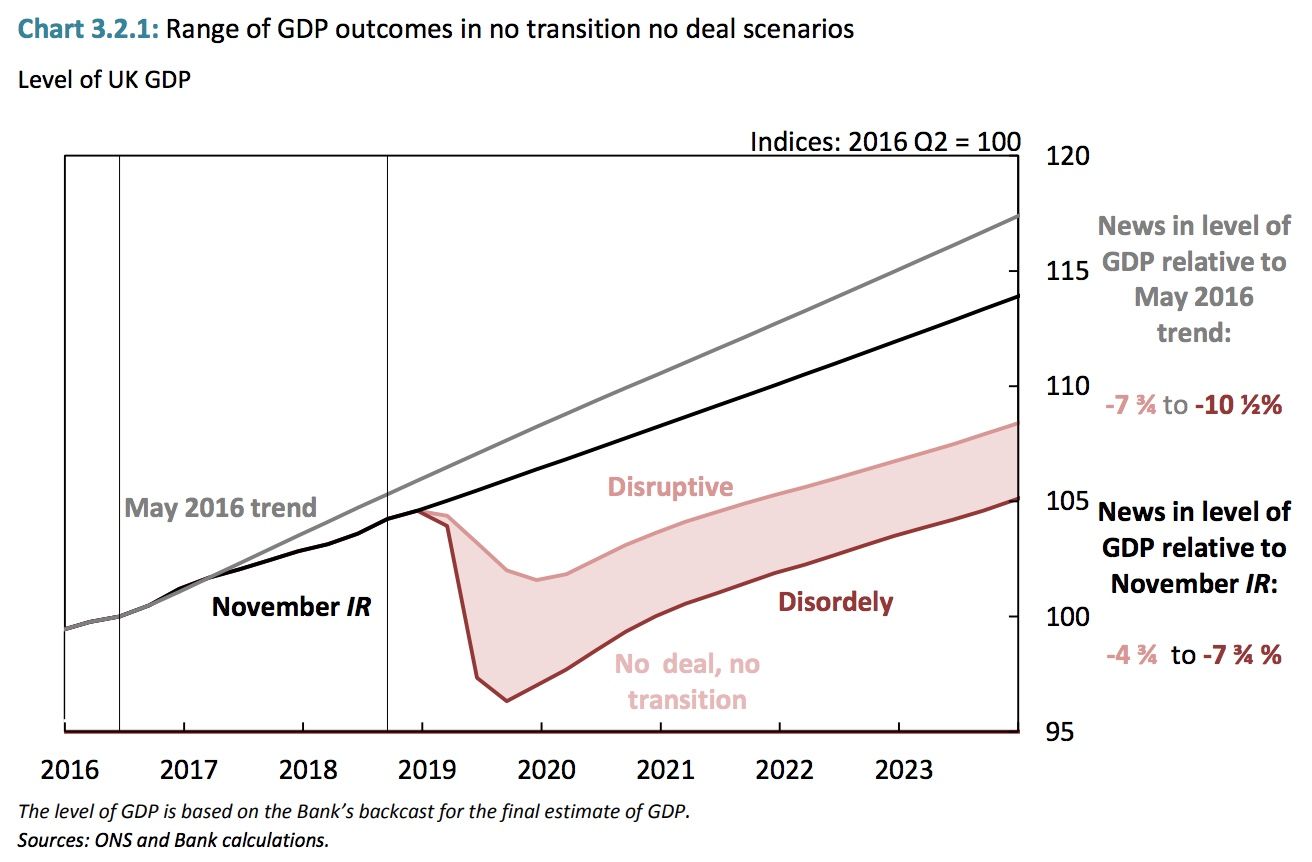 The Bank's "EU withdrawal scenarios and monetary and financial stability" analysis comes as Prime Minister Theresa May seeks to convince parliamentarians and the country at large that the deal is worth backing.

Currently analysts and political pundits see little chance of the deal passing through parliament, and whether such dire warnings for the currency and economy from the Bank of England can push the dial in her favour remains doubtful.

However should the Brexit deal be passed, the Bank believes Sterling should appreciate in 2019.

Sterling could appreciate by 5% in 2019 Q1 relative to its current level under a Close Economic Partnership.

Sterling is likely to appreciate by 2% in 2019 Q1 relative to its current level under a 'Less Close Economic Partnership'.

The Bank warns its analysis should be viewed as a document offering up potential scenarios and not forecasts.

Speaking to the press following the release, Bank of England Governor Mark Carney says the worst-case scenarios are unlikely to ever transpire.

He also adds that the purpose of this analysis is not to scare the public, rather to provide the assurance that the financial system can withstand the worst Brexit has to throw at it.

"They illustrate what could happen not necessarily what is most likely to happen. Building such scenarios requires making key assumptions about the form of the new relationship between the UK and EU, the degree of preparedness across firms and critical infrastructure, and how other policies respond," says the official release from the Bank of England.

Indeed, "viewed in this way, it was actually good news since the Bank gave the banking system a clean bill of health, even in the most disorderly Brexit scenario. Note that all of the banks passed the tests for the second time since the Bank of England began testing the financial system back in 2014," says Ruth Gregory, Senior UK Economist at Capital Economics.

The news appears to have had little impact on Sterling:

At the time of writing the Pound-to-Euro exchange rate is quoted at 1.1296, having been as high as 1.1349 earlier in the day; the move off the highs was in motion well ahead of the Bank's report.

Sterling appears to be expectant of some kind of negotiated exit being the most likely outcome in March 2019 and we expect the currency to ultimately trade familiar ranges until political uncertainty clears.