- Near October lows vs. Euro

The British Pound is hovering near October lows against the Euro and two-month lows against the U.S. Dollar as the impasse in Brexit negotiations remains front-and-centre for investors with odds of a no-deal Brexit now being at around 50% according to betting markets, up from 35% seen in October.

Understandably, we saw little near-term attention being afforded to the 2018 budget or Thursday's Bank of England policy decision suggesting these traditional drivers of Sterling value will only return to the fore once the shape of any Brexit deal is made known .

If we look at the day-on-day performance board for the previous 24 hours, we can see Pound Sterling is struggling once more: 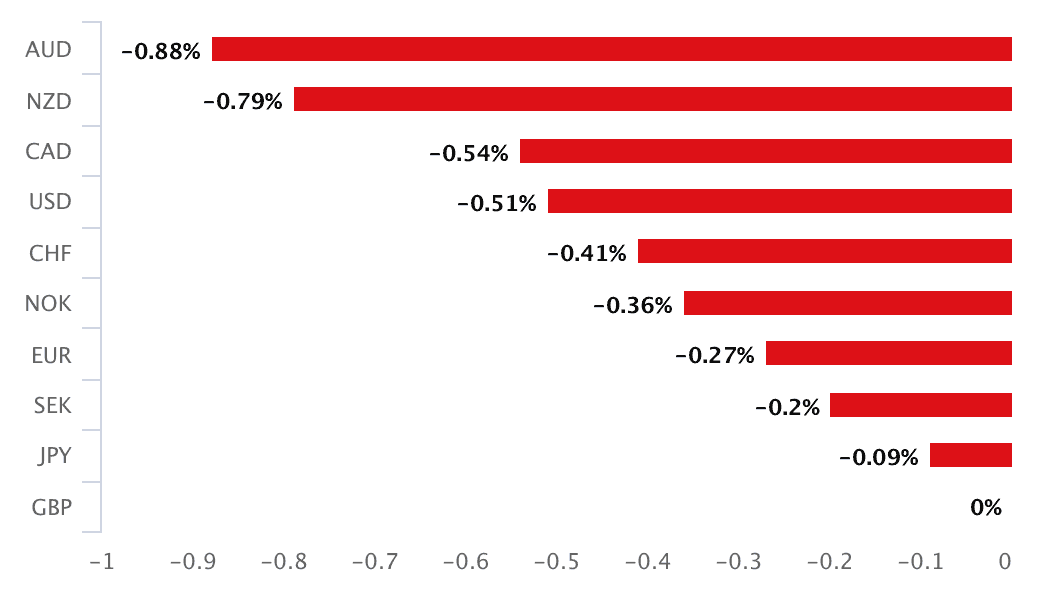 This tells us GBP weakness is the driving force across all the major GBP crosses.

The Pound-to-Dollar exchange rate now resides near two-month lows at 1.2735. The Pound-to-Euro exchange rate is quoted at 1.1223 ensuring the market is close to October lows with the declines confirming our week-ahead GBP/EUR forecast to be running smoothly.

Frustratingly, there are no substantive new headlines pertaining to Brexit to prompt the selling, but data from the futures market tells a us all you need to know: investors are bidding against the Pound as they buy protection on the options market to protect themselves against any major slump in Sterling in November-December.

December sees the last possible moment for a Brexit deal to be done between the E.U. and U.K. and therefore those with exposure to Sterling are buying downside protection against a big fall if talks fail.

This protection is bought via the purchase of options that will pay back a return at that date if the Pound does indeed crash. Remember, every time such a contract is bought, it pushes the current value of Sterling lower.

Sterling options market is apparently not interested in buying downside protection heading into the Bank of England's rate decision and inflation report due Thursday.

"The focus is on the Brexit impasse. Intra-week demand for options is light compared with previous MPC and data weeks, but options with two-month to six-month expiries still rule the roost – they fall after the perceived December deadline for a deal that leaves time for ratification before the March 29 Brexit date," says analyst Richard Pace with Thomson Reuters.

According to data from Reuters the cost of insuring against a fall in the Pound remains at near two-year highs which tells us markets are incredibly nervous and are not taking an expectation for a Brexit deal for granted.

Having been burnt by the E.U. referendum investors, speculators and corporates are not taking chances this time around.

Pace says any bounces in Sterling are likely to be sold in to, meaning any relief near-term is likely to be short-lived. However, consensus forecasts by the world's leading 50 investment banks suggests Sterling will end higher than current levels against the U.S. Dollar by the time 2018 draws to a close.

Against the Euro, Sterling could however still be a little overvalued. To view consensus forecasts, which include targets from Goldman Sachs, J.P. Morgan, HSBC and Barclays please see the Horizon Currency consensus reports. GBP/USD is accessed here, GBP/EUR is accessed here.

Concerning Brexit negotiations, there has been little official new information for markets to chew into and BBC political editor Laura Kuenssberg reports her sources as saying it remains "too early" to tell if there is a way of putting together a deal that will be approved by Prime Minister Theresa May's Cabinet.

She adds May's lead Brexit aide Olly Robbins has been "back and forth" to Brussels, "hoping to get talks back officially soon but right now no landing zone."

The E.U. and U.K. are said to be "exploring again" the same issues of contention, "they are trying to put the same ingredients together to make something that’s politically different and palatable in U.K.," says Kuenssberg.

The good news for those wanting a stronger Pound is, "main expectation on both sides still appears to be that there will be a deal of some description."

However, foreign exchange markets are not taking chances and markets will continue to buy insurance against a major drop in the Pound before year end.

"Prices remain under pressure," says Robin Wilkin With Lloyds Bank of the GBP/USD. "A rally back through 1.2865-1.2945 resistance is needed to alleviate the pressure. Otherwise, the risks remain for a test of the 1.2700-1.2660 previous lows."

AdvertisementBank-beating £ exchange rates: Get up to 5% more foreign exchange by using a specialist provider to get closer to the real market rate and avoid the gaping spreads charged by your bank when providing currency. Learn more here