- Market regime change ahead in second-half of 2019 says CIBC.

- EUR recovery to be shallower, as CAD succumbs to weakness in H2.

Currency markets entered a new stage of flux this year amid heightened uncertainty over the global economic outlook, leading major exchange rates to trade within tight ranges thus far in 2019, although the latest CIBC Capital Markets forecasts suggest a regime change is on the horizon.

CIBC says in its latest monthly FX outlook that markets have been deprived of direction because of economic weakness outside of the U.S. but that growth should pick up in the second half of 2019, leading to a widely-hawked turn lower in the value of the Dollar.

Most analysts entered 2019 forecasting a year of losses and underperformance for the world's reserve currency as, at the time, consensus was firmly in favour of the idea that U.S. economic growth would slow quite rapidly and the rest-of-world economy was due a few days of its own out in the sun.

But less than two full months into the year, incoming economic data has shown Germany flirting with recession and the bottom falling out of the Eurozone economic upturn that powered Europe's single currency to a 14% annual gain back in 2017.

China's economy remains on the rocks following a year of damaging trade skirmishes with the President Donald Trump's White House, which saw the manufacturing sector enter recession in January.

And both the main Antipodean economies also appear to be staring down the barrel of their own economic slowdown, which has left the big Dollar looking like the best out of an ugly bunch to investors, given U.S. interest rates are far and away the highest in the G10 universe.

"Despite some soft news from within the US, subpar data readings from abroad have continued to support DXY. However, as expectations for growth abroad rebuild, USD weakness should materialize in H2 2019, helped by markets accounting for a possible Fed ease in 2020," says Avery Shenfeld, chief economist at CIBC.

President Trump said this week he will not lift tariffs on Chinese exports to the U.S. on March 01, as was previously planned if a deal ending China's "unfair trading practices" is not reached before then, as he says progress has been made in the negotiations.

This could provide both Chinese and Eurozone economies with a reprieve from further headwinds although it's not clear whether it will be enough to prompt a pick-up in growth over the short-term.

Some economists say China's own domestic challenges mean its growth will slow further this year, while the White House could yet launch its own trade war against the European Union. That would be almost a sure-fire way to scupper an economic recovery on the continent. 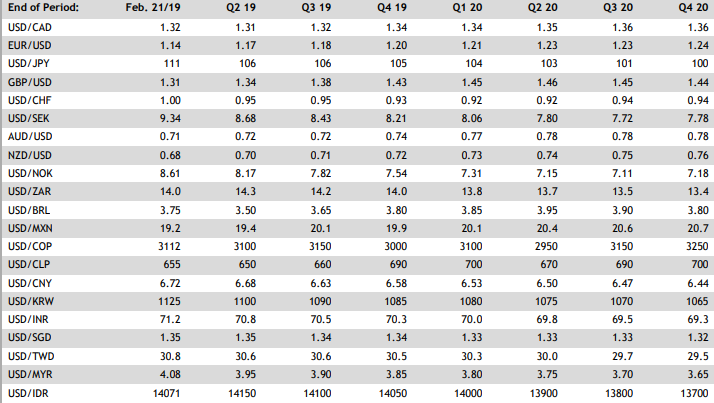 "As the clock counts down, the risks of an accidental falling-over-theBrexit cliff continue to grow. While this remains far from our base-case scenario (we still expect an eventual negotiated solution), ongoing macro-economic uncertainty has weighed on consumer confidence and business investment, suggesting near-term Sterling headwinds."

"While the data continues to be largely overshadowed by Brexit, the slide in macro activity should not be overlooked. After Q4 GDP decelerated to a mere 0.2%, early indications for Q1 - specifically a retreat in forward looking PMI data - suggest macro inertia."

"The longer that the Brexit paralysis persists, the longer we can expect BoE policy inertia. Indeed, expectations for a hike by the August MPC meeting have halved in the last month."

"With the risks of an Article 50 delay continuing to increase, any post-Brexit monetary tightening will be pushed further into the future – if, for no other reason, than there is insufficient time for the passage of necessary legislation. Hence, Sterling appreciation has been pushed backed, with GBPUSD expected to reach 1.34 in the months ahead."

"News from the US hasn’t been great, and markets are even mulling over risks for a Fed ease, but uglier news overseas has generally lifted the dollar in recent weeks"

"The Fed could still deliver one final rate hike in Q3. While that’s a quarter later than our prior forecast, even that move is not currently priced into markets."

"Our somewhat more hawkish take relative to the market on near-term US interest rates should help the US dollar hold up a bit better than our prior forecast."

"There’s an even greater dose of gloom around Europe, reflecting a recession in Italy as well as a second-half stall in Germany. Japan fared better in its final quarter, but overall, the dollar has been the winner in the contest for the least-concerning economic picture."

"Expectations for major overseas economies are now gloomy enough that there’s at least a sliver of room for upside surprises abroad. That, and the prospect for a Fed ease in 2020 as US fiscal policy tightens, should see the dollar generally in a weakening tone as we close out 2019 and head into 2020."

"Markets have paid attention to the ‘state-dependent’ portion of the ECB’s guidance, meaning that the weak data of late, particularly in the core, has led markets to price out an initial rate hike from the ECB from later this year until early next year."

"Both Brexit and the US-China trade negotiations represent key risks, although the former likely represents a more direct shock to the EU economy in the event that an agreement is not reached. As a result, the ECB has acknowledged that the balance of risks to its outlook is now to the downside."

"Spain is heading back to the polls this Spring, while the European parliamentary election in May could see a rise of right-wing populist parties, if the recent regional election in central Italy was any indication."

"The economy continues to decelerate, and while we don’t expect it to deteriorate further, it likely will not improve until mid-year at the earliest. As a result, we’ve revised our expectations for the ECB to hike slightly later than expected this year, and our EUR projection profile is accordingly flatter."

"AUD/USD weakened after the February RBA meeting was more dovish than expected. Indeed, the RBA pivoted slightly and signalled that the odds of ‘a hike vs a cut’ are more “evenly balanced”."

"Since the meeting, the market has decided that the next move will be a cut, pricing in a 15bps decline in the overnight rate by the end of 2019. Despite our belief that this is overly dovish, recent data sees us becoming less bullish on the AUD."

"The most recent data cycle suggests that the Australian economy has weakened on the whole...Both business and consumer confidence remain low, and the risks are still to the downside. Furthermore, the banking royal commission’s tighter lending conditions could further impact a weakening housing market."

"Leading indicators suggest that we may see further weakness in the Australian economy in the medium term. In addition, we believe that US-China trade discussions are likely to drag on, which will add to the headwinds facing the AUD."

"The RBNZ left rates on hold in February, but the real story was the lack of change in how it sees risks evolving...what is noteworthy is that RBNZ Governor Orr indicated that the odds of a rate cut haven’t increased over the past few months."

"The projection for reaching the inflation target and the timing of the first hike have been pushed back to late 2020 and early 2021, respectively. Additionally, note that the differences between the key judgements and risks between November and February have been revised lower overall."

"We don’t expect the Bank to hike this year, which will leave the NZD relatively vulnerable. NZD/USD is close to long-term fair valuation levels, but projected upside risk later this year will come as a result of movements on the USD leg."

"The oars aren’t rowing in the same direction for the Canadian dollar, but over the medium term, look for loonie weakness as domestic fundamentals take over from international forces."

"The Bank of Canada still seems inclined to find an excuse to hike rates, with one final hike possible in Q3 after an oil production recovery shows up in temporarily better GDP prints. That will keep the Canadian dollar better bid, towards a 1.31 low for dollar-Canada this summer. But made-in-Canada forces should put the BoC back on hold, leaving trade fundamentals to send the Canadian dollar to weaker levels over our forecast horizon."

"Trade trouble makes the case that a 1.40 handle on dollar-Canada will eventually be needed to gradually restore export competitiveness. We’ve weakened our targets for the loonie in 2020 as a result, calling for a 1.36 dollar Canada to close out 2020."

"In addition to a wide current account deficit that helps pull the loonie that way on its own, beyond 2020, we might also get help from a more dovish Bank of Canada to generate a weaker CAD."