- USD to rise further into 2019 as others retreat says MUFG.

- But U.S. midterms, Brexit and Euro data are all wild cards.

The U.S. Dollar is likely to remain the dominant force in currency markets until well into the New Year, according to analysts at MUFG, who now project a slower pace of gains for most other currencies during the months ahead.

MUFG's latest forecast update comes in the wake of a month where the Dollar rediscovered its mojo, rising just more than 2% during October after forcing most of its rivals onto the back foot, taking the 2018 gain of the Dollar index to 4.5%.

A third-quarter GDP number that was stronger than expected and a favourable set of labour market figures all helped to put the greenback onto its front foot, while the global outlook was dented by poor Chinese and Eurozone growth data.

Now, economies elsewhere in the world are not expected to regather any of their proverbial steam until some time in the New Year while, with the U.S. midterm elections taking place Tuesday, the Dollar itself is approaching an inflection point.

Below is a selection of MUFG' views on what this environment is likely to mean for individual exchange rates. 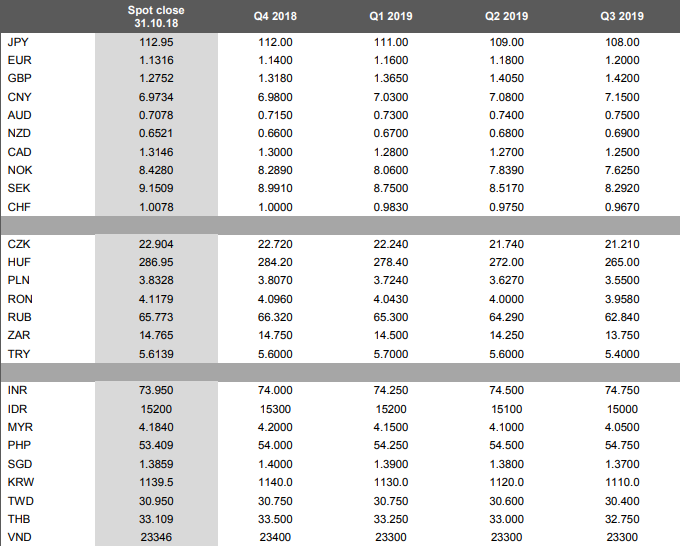 "We are maintaining our view that a ‘no-deal’ Brexit will be avoided. We are now very close to a deal and we suspect legal wording can be found that results in a deal being completed. As the clock ticks, the incentive to do a deal will increase on both sides."

"If a no-deal scenario looks more likely we would also expect support to increase to either extend the 2-year Article 50 deadline of 29th March 2019 or to move the UK into EFTA. Undoubtedly, these more convoluted solutions would first involve additional GBP selling as uncertainty escalates. With these risks somewhat higher and rising we have lowered our cable appreciation profile."

"Were it not for the profound uncertainty related to Brexit, we suspect the BoE would be now giving clear guidance on the need for additional monetary tightening. The evidence of building wage inflation is becoming clearer and nearly all MPC members have highlighted this."

"Like with our forecasts elsewhere, we have lowered our GBP forecasts versus the dollar. This reflects the broader performance of the dollar but also the fact that we are now entering the ‘danger zone’ in Brexit negotiations where further gridlock could begin to do more serious damage to the UK economy."

"We have to acknowledge at this point that some of the key assumptions we made in relation to our dollar depreciation forecast have not played out as expected. A lack of rebound in growth in the euro-zone in Q3 and the failure of UK and EU authorities to reach a deal on Brexit are factors undermining our forecasts. While we accept the dollar could well strengthen further over the short-term, we are maintaining our view of depreciation materialising in 2019."

"With President Trump promising voters a middle-income tax cut, a surprise victory that saw the Republicans maintain its control of both the House and the Senate would give the dollar and US yields a near-term lift. A Democrats victory would see no additional stimulus and an escalation of Congressional Committee investigations into President Trump and other senior administration officials."

"The ECB chose at its meeting in October to maintain a broadly consistent message of economic risks remaining balanced and broad economic conditions remaining consistent with their objective of price stability over the medium term."

"But the financial market response to the ECB’s maintained view of the economic outlook suggests a degree of scepticism in the ECB’s view. This is understandable. We certainly must acknowledge that the weakness of real GDP growth in Q3 was a surprise and certain factors have played a greater role in slowing economic activity than we anticipated."

"The regulatory changes in Germany that hit production; the fiscal crisis in Italy and business concerns over global trade being hit by tariffs have all had a greater impact than we expected."

"We have now lowered our forecast projections. We have revised the entire EUR/USD forecast profile lower by between 4-5 big figures but have maintained the upward profile given we still expect some narrowing of the wide macro divergence between the euro-zone and the US in 2019."

"Short-term risks remain skewed to the downside and a test of the 2016 low of 0.6827 is feasible. One key determinant of how much further lower we can go will likely be the degree of success on stimulus from China to offset the negative impact from trade tensions with the US."

"We are sceptical of the impact of additional stimulus and expect real GDP growth in 2019 to continue slowing. That will act as a drag on any AUD recovery from current lows. Given the broader revisions higher to our dollar forecasts and the recent China data and the higher USD/CNY forecasts we now assume, we have lowered our AUD/USD profile as well."

"We still expect some recovery though. There was a notable drop in the unemployment rate in the September data and while the RBA played down the policy implications of this, we still see this as a step toward evidence of wage inflation building that will force the RBA to shift its benign guidance on rate hikes ahead."

"The NZX50 index fell by nearly 6% in October as fears over global growth from ongoing trade conflict worsened. Softer growth data from China exacerbated this correction. The 10-year government bond yield spread between the US and New Zealand climbed to all-time highs. Global growth concerns have also weighed on the kiwi through weakness in commodity prices."

"There has been building evidence that inflation pressures are picking up from subdued rates. The annual rate of headline inflation accelerated from 1.5% to 1.9% in Q3, and moved closer to the RBNZ’s 2% target. It supports the RBNZ’s view from their last policy meeting in September that there are “welcome early signs” of inflation rising. However, the RBNZ still does not appear in any rush to consider tightening monetary policy."

"Governor Orr reiterated their intention to maintain the OCR at an expansionary level for a “considerable period”. A stronger pick-up in inflation pressures will be required to encourage the RBNZ to bring forward rate hikes plans. In these circumstances, we expect the kiwi to strengthen only modestly."

"Although CAD depreciated, it did out-perform most other G10 currency performances and was the 3rd best performing currency in October. Part of this relative performance reflected the fact that the BoC raised rates in October as the economy continued to grow at a rate above potential."

"The data in October also suggested there is scope for caution on additional rate hikes by the BoC. Housing data remains mixed while manufacturing and retail sales data were weaker than expected. But the stand-out data miss was the inflation data for September. The annual CPI rate fell sharply, from 2.8% to 2.2% with all the BoC underlying measures showing a slowdown as well."

"While BoC action and the new USMCA trade deal helps offer CAD support, there is some greater uncertainty over crude oil prices. The domestically priced Canada Select fell 35% in October and is nearly 60% lower from the year-to-date high in May, and reflects bottle-necks of oil exports to the US. This price drop warrants some modest adjustment lower to our CAD forecast profile."