-Rates WILL NOT rise in July 2019, to remain on hold "through summer".

The Euro slumped Thursday after the European Central Bank quashed market hopes of an initial Eurozone interest rate rise in June 2019, despite having surprised markets by announcing an eagerly awaited end to its quantitative easing (QE) programme.

The European Central Bank said Thursday it will continue buying €30 billion of European government bonds each month until the end of September 2018, at which point the rate of monthly purchases will be cut to €15 billion before being reduced to zero at the end of December. This should have been a positive development for the Euro.

However, the ECB also quashed earlier hopes among traders that it would be in a position to raise interest rates from their record lows in June 2019, dealing a crushing blow to the single currency and a broad swathe of forecasters who had hoped that an end to the era of ultra-low interest rates was near.

It goes almost without saying the ECB's main refinancing rate, marginal lending rate and deposit rate were held at 0%, 0.25% and -0.4% respectively in June.

"The Governing Council expects the key ECB interest rates to remain at their present levels at least through the summer of 2019 and in any case for as long as necessary to ensure that the evolution of inflation remains aligned with the current expectations of a sustained adjustment path," says the ECB, in its statement. 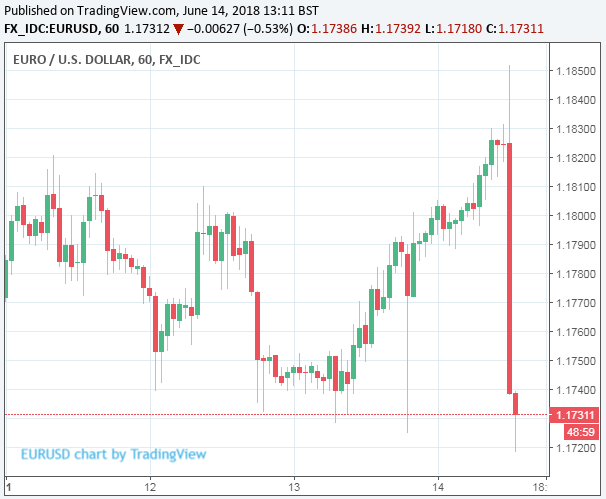 The Euro-to-Dollar rate was quoted 0.90% lower following the statement, after reversing an earlier 0.17% gain, while the Pound-to-Euro rate was 0.56% higher at 1.14. The single currency also reversed earlier gains over all other G10 currencies barring the Swedish Krona. 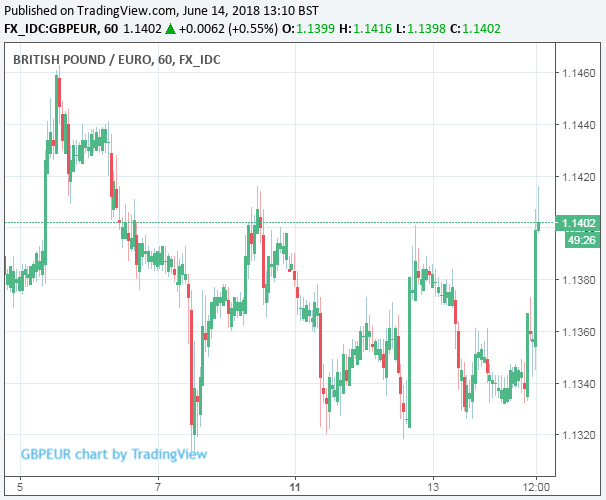 "The wording through the summer of 2019 suggests that we won't see rate hikes until September at the earliest," says Jacqui Douglas, chief European macro strategist at TD Securities. "This is consistent with our view for the first rate hike to come in September 2019, even if the pace of tapering was a big quicker than we had expected."

Recent comments from ECB officials, particularly the usually-taciturn chief economist Peter Praet, had suggested policymakers increasingly want to end the bank's QE programme. This has seen it buy tens of billions of Eurozone bonds each month since early 2015 in an effort to stimulate the economy and spur inflation.

Praet said inflation pressures are now mounting to the extent that it would be prudent to end the bond buying programme and, eventually, start raising interest rates. The ECB economist earmarked the June meeting as a time when the governing council would likely discuss when to announce an end to the bank's intervention in bond markets.

These comments initially came as a surprising given a murky inflation picture and the marked deceleration in growth suffered by the Euro area this year, but the market had since come to believe the central bank would not only end its QE programme over coming months, but that it would also look to raise interest rates around the middle of 2019. The ECB' statement Thursday puts this idea to rest.

"The prospect of rate hikes next year is dwindling rapidly. The new forward guidance that rates will remain unchanged “through the summer of 2019” leaves precious little time for the current governing council to begin the process of interest rate normalisation given that Mr. Draghi and Mr. Cœuré are both stepping down in Q3 and Q4 respectively," says Claus Vistesen, chief Eurozone economist at Pantheon Macroeconomics.

Thursday's decision to cease new bond purchases is contingent on the inflation picture evolving in line with the central bank's forecasts, which were upgraded on Thursday. It, and other future policy decisions, are also hinged on Europe, the US and world more generally avoiding a so called trade war.

Eurozone growth forecasts were also revised Thursday, with the bloc's economy now projected to grow by 2.1% in real terms for 2018, down from the 2.4% forecast issued back in March. Projections for growth in 2018 and 2019 were held steady at 1.9% and 1.7% respectively.

Most importantly, all of these forecasts are hinged on the European Union avoiding a so called trade war with the United States, as well as the broader global economy not being pulled into a conflict where the weapons and bullets come in the form of protectionist trade policy measures and tariffs.

President Donald Trump imposed tariffs on imports of steel and aluminium into the US, from the EU, Canada and Mexico, at the end of May in a move that drew allegations of "protectionism" and swift threats of retaliation from the European Commission. President Trump has previously responded to retaliatory trade tariffs, from China, with yet more American tariffs.

The White House has since flagged disproportionately large EU tariffs (10%) on imports of American made cars into the bloc and threatened to raise US levies (2.5%) against European automotive goods. The European automotive industry generates in excess of 500 billion in turnover annually and is reponsible for hundreds of thousands of jobs globally. Many of these jobs are in North America, but even more of them are in Europe.

Fears are that European Commission officials will retaliate against the steel tariffs, drawing all of Europe into the quagmire of a tariff fight that the bloc is destined to lose, given the large imbalance between the EU and US. Census Bureau data shows US companies and consumers spent $150 billion more in the continent during 2017 than their European peers did in the US.