The EUR/USD pair has fallen sharply over recent months from highs of 1.2556 to its current level at 1.1635.

It is in a short-term downtrend which is expected to continue.

The decline has been driven mainly by the strengthening Dollar as a result of global growth fears and currency crises in Turkey and Argentina.

Euro-weakness has been less of a factor in the pair's sell-off but slowing economic momentum in the region and Italian political risks have not helped.

In the week ahead these factors may be material in deciding the currency's continued trajectory.

From a purely technical viewpoint, we see a possibility that the downtrend will continue to 1.1600, at which point it will encounter technical levels which will probably severely impede its decline. 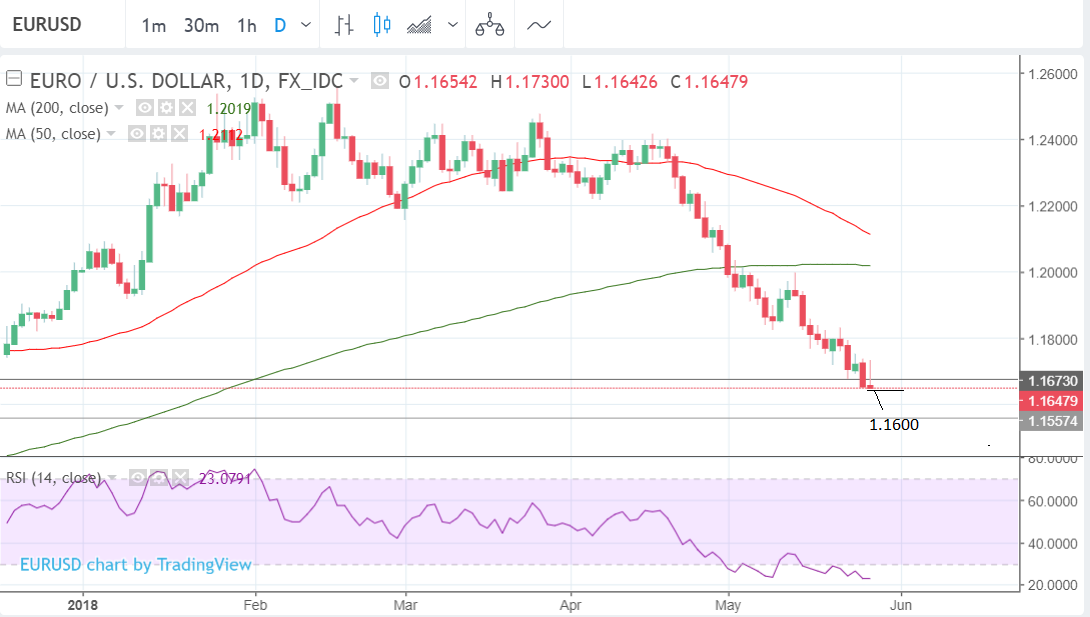 One of these is the 50-month moving average (MA) at 1.1591, which is likely to prevent further declines (see below).

Large MAs often obstruct the trend as they are popular indicators and, therefore, the location of increased supply and demand. 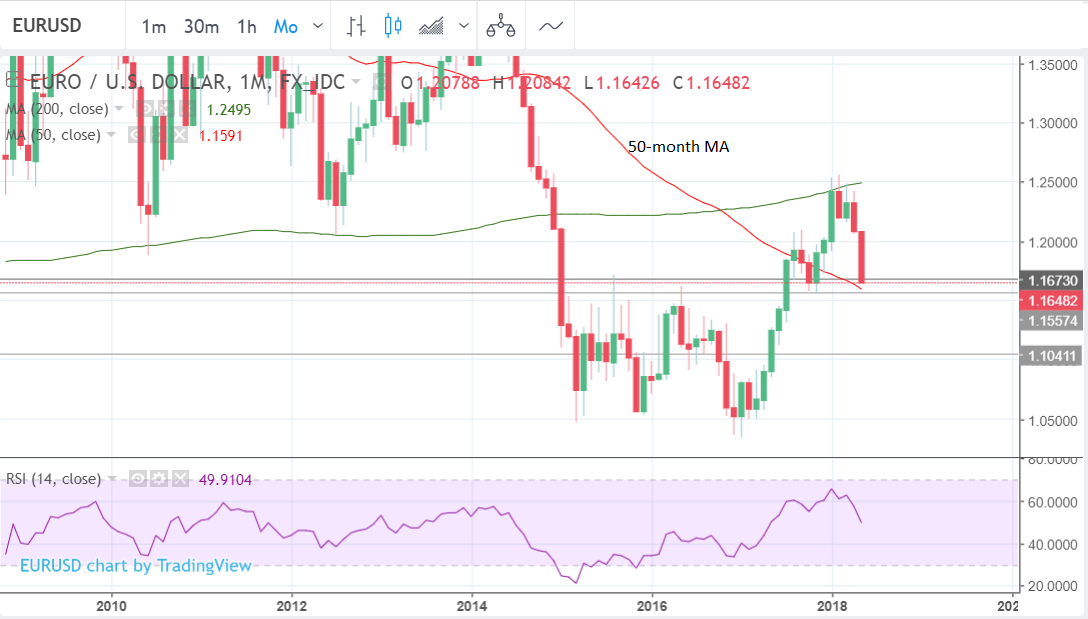 A clear break below the 50-month MA, confirmed by a move below 1.1500, would, however, signal a continuation lower to a target at 1.1400, but we do not see this as likely in the week ahead, given we expect the monthly MA to provide a robust floor.

EUR - What to Watch

The main release in the week ahead for the Euro is inflation data, out on Thursday at 10.00 GMT, along with unemployment which is out at the same time.

CPI is a critical input in the European Central Bank's (ECB's) decision-making processes and if inflation rises enough the ECB will reduce its emergency QE facility and put up interest rates which will boost the Euro since rising interest rates attract greater inflows of foreign capital, drawn by the promise of higher interest returns.

Current expectations are for inflation to rise in May after April's softer-than-average result due to an Easter effect as well as other temporary factors. Rising oil is expected to push up broad inflation.

Core Inflation is forecast to rise to 1.0% and broad inflation to 1.6% in May.

"After HICP inflation slowed to 1.2% in April, partly on account of Easter affected holiday prices, markets will be eyeing a rebound in May’s figures," says Investec's Clarke.

"We see elevated risks that markets will put too much emphasis on rising headline inflation in the Euro area over the next months and as the market pricing of the ECB has almost collapsed recently, there is a risk that the market will reprice the ECB hawkishly from the current levels. If a hawkish re-pricing were to rise into the summer, we would prefer to fade such a move," says the Nordea strategist.

The Unemployment rate, meanwhile, is forecast to fall a basis point to 8.4%.

On the Italian front, there is heightened political turmoil after President Mattarella rejected the controversial Finance ministry candidate which the coalition put forward, for his Eurosceptic views.

This has led to a breakdown in the coalition which could be replaced by a technocratic government temporarily whilst elections are reset for October.

So far the impact on the Euro from Italy has been fairly marginal due to minimal contagion to neighbour economies, and this may well persist.

USD - What to Watch

The Dollar has mainly risen as a result of the rest of the world (RoW) doing so badly, although rising US yields have also been a factor according to analysts.

In the week ahead these to factors may be material in deciding the currency's continued trajectory.

From a hard data perspective, the key day for the Dollar is probably Friday, June 01, is as that is when two major barometers of the US economy, Non-Farm Payrolls at 13.30 GMT, and ISM Manufacturing at 15.00 are released.

NFPs is expected to show the US economy added 185k jobs in May compared to 164k in April, but it is probably the wage data which will be more important, as it is a more direct driver of inflation and therefore interest rates - higher interest rates tend to drive up the value of the Dollar, as they attract greater inflows of foreign capital, drawn by the higher return potential.

"The market will once again focus on wage numbers. More signs of wage growth picking up will support further upside pressure on US interest rates. The consensus is for an increase in average hourly earnings of 0.2% mom and 2.7% yoy. We continue to see upside risk," says Andreas Steno Larsen, senior FX/FI strategist at Nordea Bank.

ISM Manufacturing is expected to show activity in the sector picked up to 58.0 in May from 57.3 previously.

Consumer Confidence on Tuesday at 15.00 could be another key release for the Dollar. Analysts expect a slightly pull-back to 128.0 from 128.7 previously.