Eurozone politics will dominate the Euro in the week ahead but ECB policy and an eventual rise in European government bond yields will be more important for the Euro-to-Dollar exchange rate in 2018.

The Euro should get the all clear for another leg higher at the beginning of March, according to strategists at BMO Capital Markets, who believe the final political risk events in the current Eurozone election cycle will pass without major event.

Stronger economic growth and continued weakness of the US Dollar has seen the single currency enjoy another stellar run in 2018, which drove the EUR/USD rate up to three year highs of 1.2555 in early February.

however, standing between the Euro and new peaks are the Italian general election of Sunday 04, March and a key vote by the membership of the Social Democratic Party (SPD) in Germany over whether to endorse a grand coalition with Chancellor Angela Merkel and the Christian Democratic Union.

“Italy’s elections will probably result in a weak grand coalition, minority government or a second vote. This is problematic for the Eurozone in the long-run, but Italy does not pose an existential threat to the bloc in the short-run. Even a further political stalemate in Germany is a low-impact scenario,” says Stephen Gallo, head of FX strategy at BMO Capital Markets. 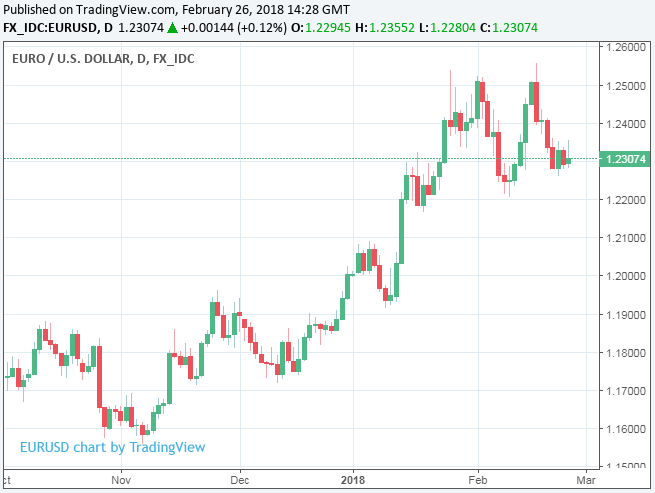 Above: Euro's rally against the Dollar has paused.

The SPD vote in Germany comes after Chancellor Merkel struck a deal this month for her Christian Democratic Union (CDU) party to form a coalition government with the opposition. Recent polling suggests satisfaction among members over the deal and so there is a chance it could be rejected, which would mean a weak minority government in Germany, or fresh elections.

Support for the SPD was recorded at an all time low of 15.5% this month, down from 21% before and immediately after the September 2017 election, relegating it to third place behind the Alternative fur Deutschland in the league table of Germany’s largest parties.

The result of the SPD vote will become known on the same day that Italians head to the polls to choose their next government. Almost all parties vying for electoral support have made pledges that will place Italy on a collision course with Brussels over public spending and the nation’s budget deficit.

The Five Star Movement, Italy’s largest political party and a growing anti-establishment force, has pledged to renegotiate European rules on budget deficits and austerity. It has floated the idea of a referendum on Italy’s continued use of the Euro in the event the negotiation fails.

The ECB Still in the Driving Seat

BMO Capital Markets’ FX strategy team says the positive factors supporting the Euro’s recent rise should ultimately outweigh any of the negatives that stem from next Sunday’s politics through the rest of the year.

“Confirmation from the ECB that outright QE will finish in late 2018 and a shift in the forward guidance on rates have yet to be fully reflected in the value of the EUR. We expect the ECB to subtly shift its QE guidance at the March 8 meeting,” Gallo writes, in a recent briefing.

The Euro-to-Dollar rate has risen more than 16% over the last 12 months, with much of this gain coming after June 2017 when European Central Bank president Mario Draghi hinted to markets that the ECB could soon begin to think about winding down its quantitative easing bond buying program.

Less than a year later and the ECB has halved the rate of its monthly bond purchases, from €60 billion per month, to €30 billion, leaving markets speculating on when it will cease its intervention in the bond market completely. 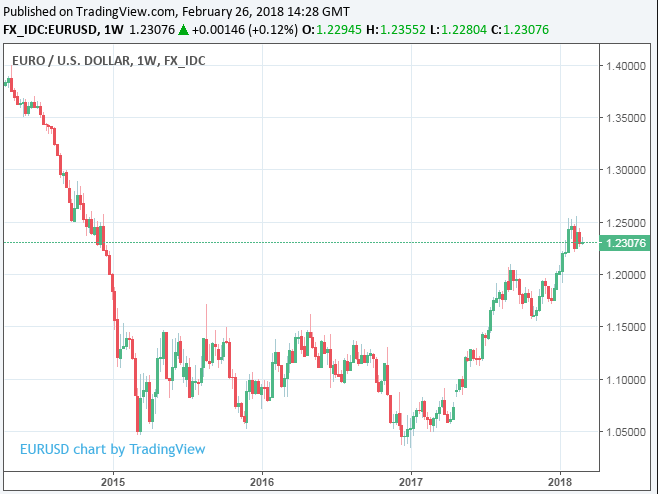 A complete exit by the ECB from the bond market should be positive for the Euro because it will remove a key source of downward pressure on market interest rates, creating scope for bond yields to rise.

When record-low Eurozone bond yields do begin to edge higher, they could draw new capital from elsewhere in the world, which would naturally push the Euro higher against other currencies.

“The EUR is a major reserve currency with a large basic balance surplus. The EUR-positive impact of the external surplus will be compounded by inflows into EUR assets from FX reserve managers,” Gallo notes.

The Eurozone economy grew by 2.5% in 2017, marking its best year in a decade and, with institutional investors of all stripes having dumped the Euro en masse during the years since the financial crisis, BMO and other FX firms are betting international capital will flow back to the Eurozone in 2018.

“We expect EURUSD to trade at 1.25 in 3M after Italian election risks are cleared and the ECB subtly shifts its QE guidance on March 8. We expect a second confirmation rally to 1.28 during Q3 when the ECB shifts its forward guidance on rates and prepares markets for the first rate hike of the cycle (H1 2019),” says Gallo.

Gallo’s 3 month target is slightly below the 1.26 forecast issued in January although his call for EUR/USD to sit at 1.28 in nine months time is broadly in line with the bank’s earlier forecasts.