The Euro to Dollar exchange rate entered the new week at nine-month highs and with scope for an extended recovery above 1.09 and toward the 1.10 handle as a more benign global economic backdrop and hawkish European Central Bank (ECB) policy stance benefit the single currency.

Europe's single currency stumbled briefly against a falling Dollar last week following a seemingly erroneous press report suggesting some members of the ECB Governing Council may be getting cold feet about following through on December's hawkish interest rate guidance.

That guidance was that further increases in interest rates are assured and will likely be delivered in half percentage point increments over the coming meetings, which is still very much the stance if the latest on-the-record remarks from President Christine Lagarde and others are anything to go by.

"I know that a lot of journalists made a big fuss about the fact that headline numbers had gone down most recently and you also mentioned yourself that we have to look at core inflation which is certainly critically important," President Lagarde said in a panel discussion at the World Economic Forum last Thursday.

"Inflation by all accounts, however you look at it, is way too high and our determination at the ECB is to bring it back to two percent in a timely manner and taking all the measures that we have to take in order to do that," she added. 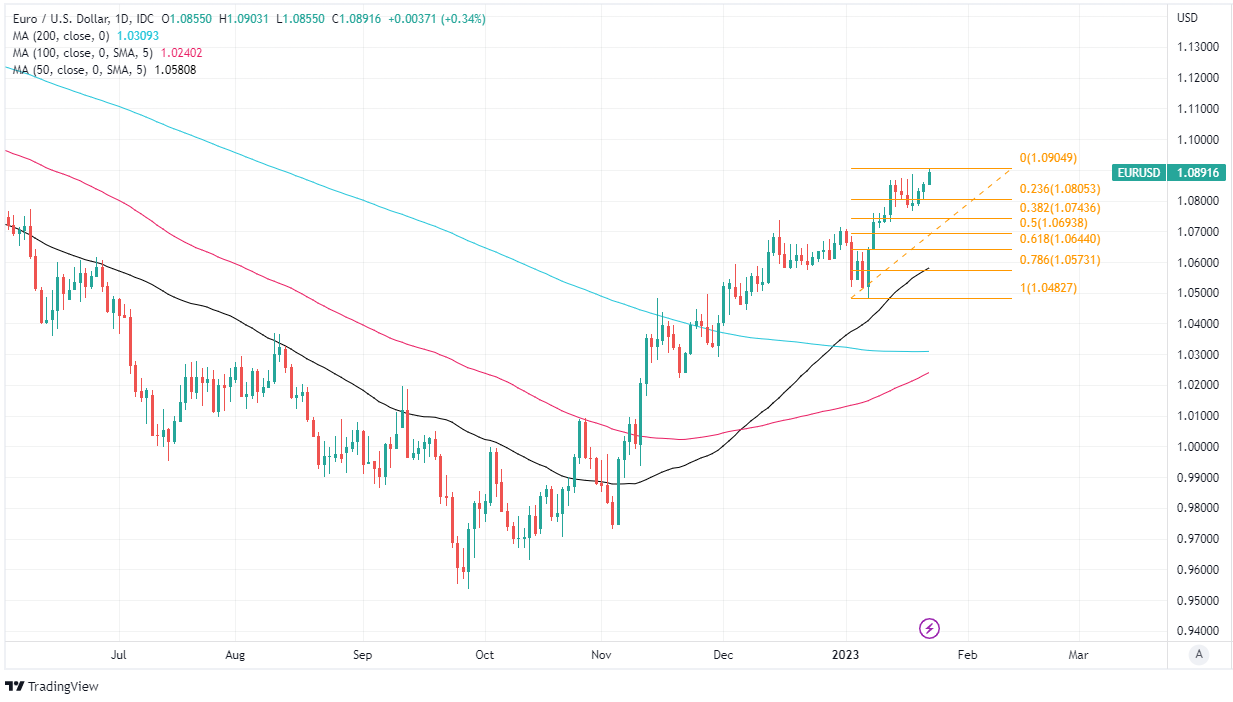 While energy prices have recently fallen and put downward pressure on inflation of late, President Lagarde argued last week that price growth remains too high and that risks remain on the upside in part because unemployment is at "rock bottom compared with what we have had in the last 20 years."

Other Governing Council members also doubled down on December's guidance over the weekend including Klaas Knot and Olli Rehn with each suggesting that half percentage point increases in borrowing costs remain likely for both February and March meetings.

This stance suggests European interest rates are likely to be rising at a faster pace than those of the Federal Reserve (Fed) from February when the latter is expected to further reduce the pace at which it lifts U.S. borrowing costs owing to a 425 basis point increase last year and a recent ebb of inflation.

"We believe EUR/USD is likely to rally further towards our end-January target of 1.10 and possibly towards 1.16 by year-end (new forecast). But it’s more than just a US inflation story, as Europe is recovering in a big way," writes Jordan Rochester, a strategist at Nomura, in a recent research briefing.

"There is a growth convergence story in Europe vs the US. Fed hikes are materially slowing the US economy. Meanwhile, in Europe the combination of fiscal stimulus and dramatically lower energy prices have shifted the growth negative headwind of last year into a tailwind for early 2023," he adds. 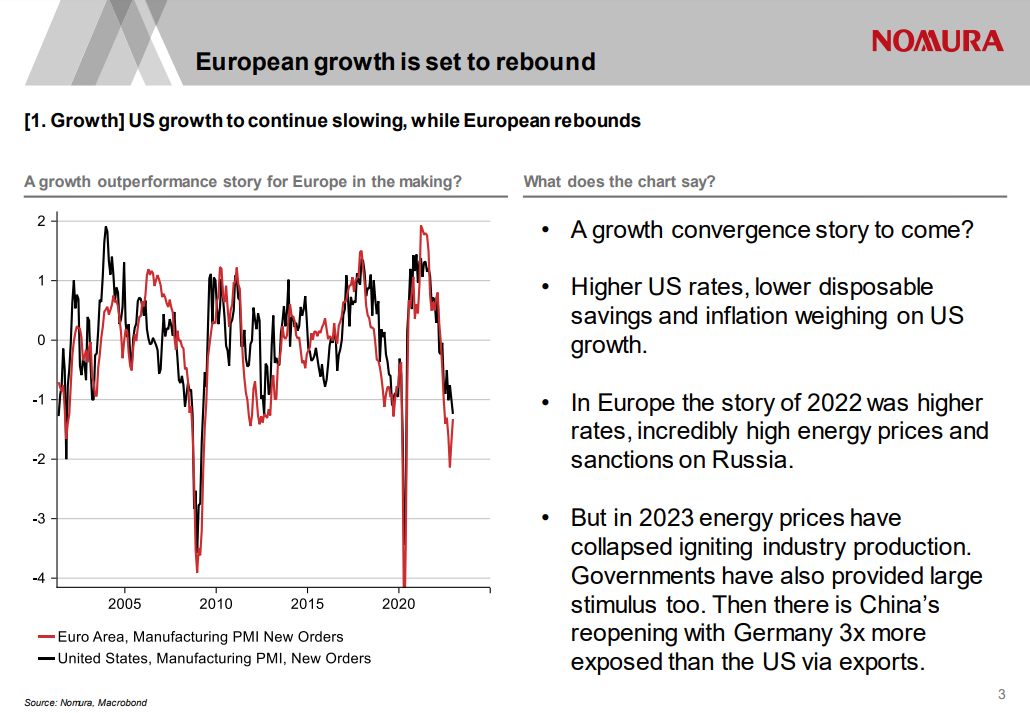 To optimise the timing of international payments you could consider setting a free FX rate alert here.

ECB policy will be the focus again this week when President Lagarde and Executive Board member Fabio Panetta is set to speak publicly about monetary policy-related topics, although European business surveys out on Tuesday will also be scrutinised closely by the market.

"We expect the US and European PMIs to remain below 50pts and be consistent with a mild recession. The risk is the US contraction deepens and the European PMIs increase because of lower energy prices," says Joseph Capurso, head of international economics at Commonwealth Bank of Australia.

"The benchmark European gas price is now well below its pre-war level though near long run average levels. A move in the PMIs back above 50pts, indicating expanding economic activity, could encourage EUR/USD to test upside support at 1.1033," Capurso adds in a Monday research briefing.

The Euro to Dollar rate might also potentially benefit this week if Thursday's release of final quarter GDP data in the U.S. supports the notion of a soft landing for the world's largest economy and if there is no upset from Friday's Core Personal Consumption Expenditures (PCE) Price Index.

The latter is a measure of inflation that is keenly monitored by the Federal Reserve (Fed) and would pose an upside risk to U.S. bond yields and the Dollar if Friday's release begs to differ with the recent consumer price index figures, which indicated that U.S. inflation is now over the hill and in retreat. 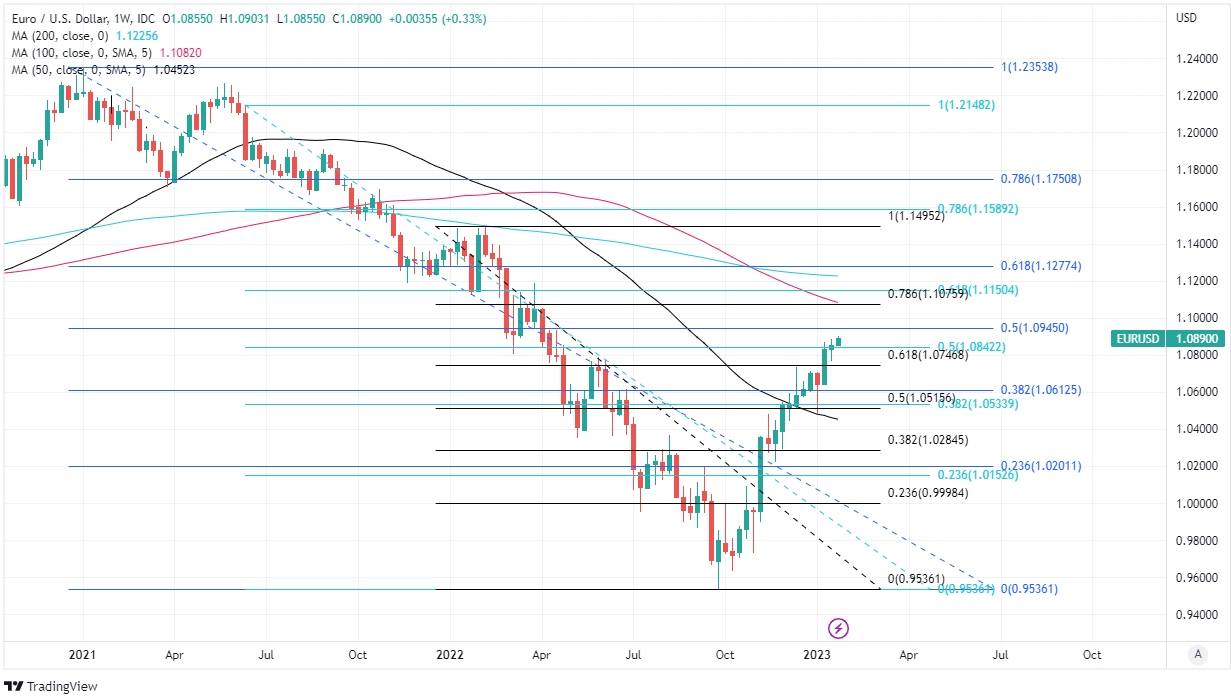 Above: Euro to Dollar rate shown at weekly intervals with Fibonacci retracements of January 2021, June 2021 and April 2022 declines indicating possible areas of technical resistance for the single currency. Click image for closer inspection. If you are looking to protect or boost your international payment budget you could consider securing today's rate for use in the future, or set an order for your ideal rate when it is achieved, more information can be found here.