"I would not be short euros between now and September 8. Risk/reward looks poor to me" - Brent Donnelly, Spectra Markets.

The Euro to Dollar exchange rate (EUR/USD) has clambered back above the parity milestone and it's possible that some of this price action reflects concerns among speculative sellers that the risk of betting against the single currency may no longer be justified by the prospective rewards of doing so.

Europe's single currency entered the week trading below the one-for-one level but rose as high as 1.0078 on Wednesday and was still above parity on Thursday following a favourable turn in prices of gas and electricity as well as hawkish commentary from European Central Bank (ECB) rate setters.

"There is a bit of a sentiment shift here in EURUSD. Multiple people who I would consider ahead of the curve are covering EURUSD shorts or discussing long EUR crosses over the next week or two," says Brent Donnelly, president at Spectra Markets and a veteran currency trader.

"The massive gamma pocket in the 0.9900/1.0000 zone has served as a giant baseball glove to catch the falling EURUSD and now the stage is set for a mild recovery. And EURCHF was the canary as it bottomed first and it’s the most crowded EUR short," Donnelly wrote to subscribers of the daily market newsletter AM FX this week. 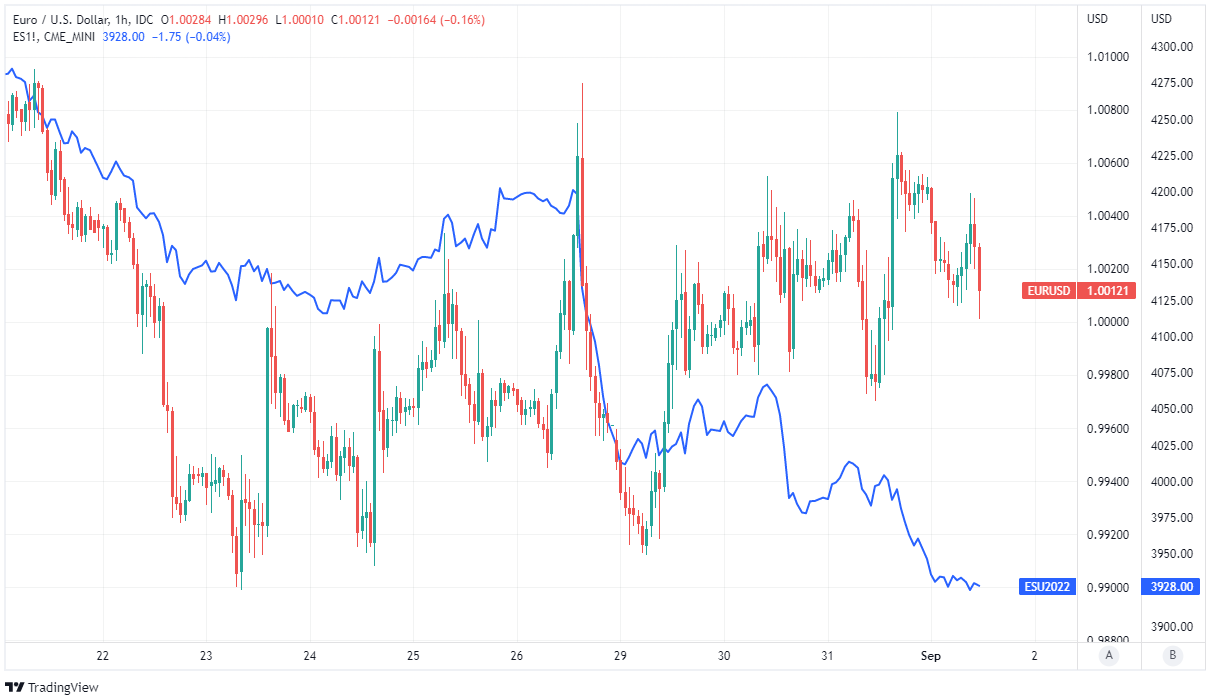 The Euro first tested the parity level against the Dollar during the early weeks of July and has been quoted as low as 0.9903 in the six weeks since then but only after a significant loss of momentum for a downtrend that has been in place since January 2021.

Donnelly and others have attributed this loss of downward momentum to institutions buying the Euro to hedge or protect themselves against risks associated with FX Option transactions between themselves and clients, although some have also flagged other reasons for a more cautious approach to EUR/USD in the days ahead.

"I have no idea what shape an EU power market intervention might take but when policymakers tell you they are about to change the rules, it’s worth considering that the rules might be about to change," Donnelly said.

European Commission President Ursula von der Leyen said from a summit in Slovenia this week that electricity costs have been lifted needlessly by the price of natural gas and announced that Brussels will look to reform the power market in the early months of next year.

Wholesale gas and electricity prices fell throughout the week but the rally by the Euro was also accompanied by' suggestions from ECB policymakers that they could debate following in the footsteps of the Federal Reserve next week with a 0.75% increase for interest rates in September. 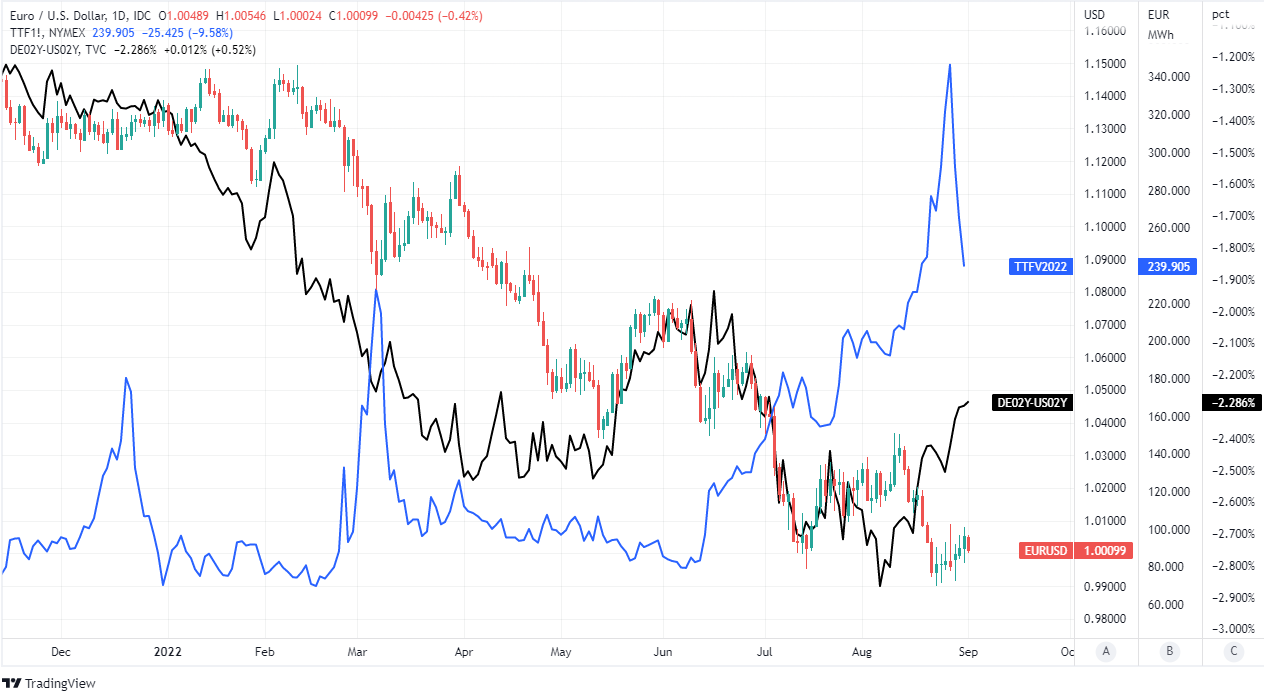 "A EUR recovery is likely to be aided by anticipatory buying (new longs and shorts covering) into the ECB meeting as they have suddenly got some religion on inflation for whatever reason," Donnelly said.

"While payrolls and month end are event risks before then, I would not be short euros between now and September 8. Risk/reward looks poor to me," he added.

The ECB lifted its previously negative deposit rate back to zero in July and warned that further increases would be necessary due to the steep and ongoing increase in inflation rates across Europe.

Eurostat revealed on Thursday that inflation reached a new historic high last month and one loftier than had been anticipated by economists, leading many to lift forecasts for the ECB's interest rates in September and beyond.

But while economists have turned more hawkish and some policymakers may be leaning more in this direction too, European Central Bank chief economist Philip Lane came across as less convinced about any of the possible merits of a larger interest rate step in September.

"A steady pace (that is neither too slow nor too fast) in closing the gap to the terminal rate is important for several reasons," he said at one point in an address at the Annual Meeting 2022 of the Central Bank Research Association (CEBRA) in Barcelona on Monday. 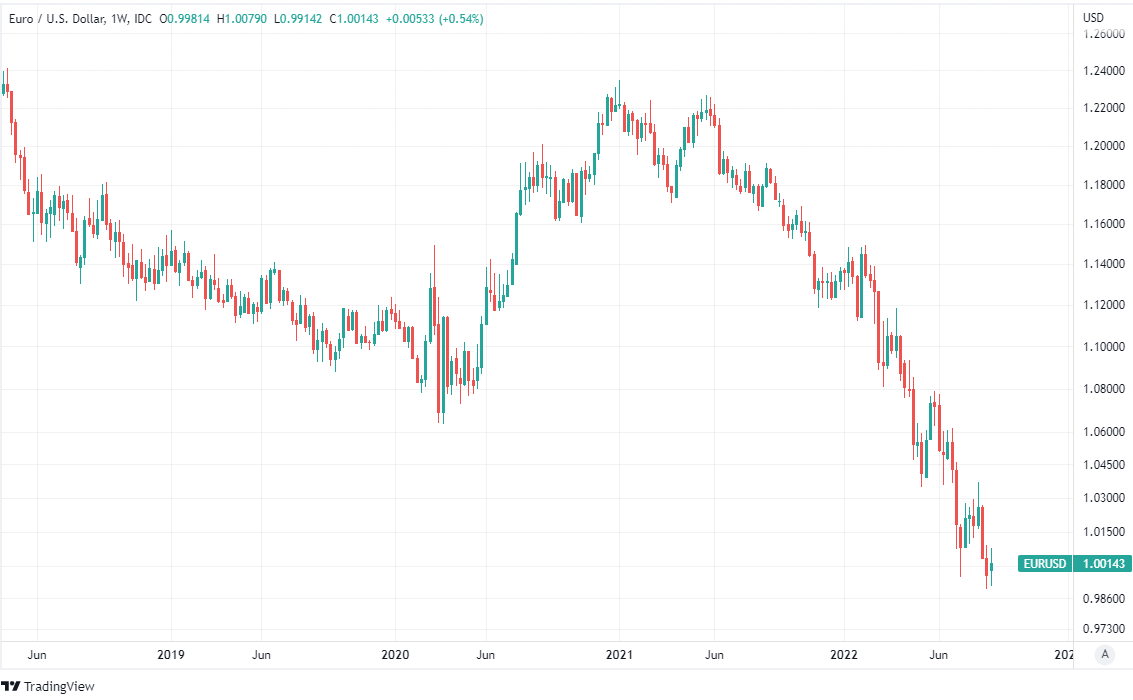