The Euro can avoid a fall to parity against the Dollar as long as current forecasts for a continuation in Eurozone economic growth are realised, says an analyst at a major European lender and investment bank.

Rabobank do however warn clients they are reconsidering their existing suite of forecasts for the Euro to Dollar exchange rate as a result of ongoing pressures caused by high energy prices and the war in Ukraine.

The Euro-Dollar exchange rate rebounded slightly ahead of the weekend as the market looked to snap a run of six consecutive daily declines which have prompted increased chatter of the prospect of a fall to 1.0 EUR/USD.

Expectations that the Euro and Dollar could reach parity have only grown after the exchange rate fell by nearly 2.0% in the week ending April 29 and is remains soft at the time of writing on Tuesday May 03.

A combination of unbridled U.S. Dollar strength and fears the Eurozone economy will continue to face headwinds from soaring energy costs have contributed to these declines.

"The strength of the USD in recent sessions has prompted a discussion as to whether EUR/USD is headed to parity," says Jane Foley, Senior FX Strategist at Rabobank.

A large part of the reason the Euro fell to a low of 1.0471 midweek on reports Russia had cut off energy supplies to Poland and Bulgaria. (Set your FX rate alert here).

This will have knock on effects for the Eurozone economy: currently the consensus and the European Central Bank (ECB) do not expect the bloc to fall into recession, however an intensification of the energy supply shock could deliver such an outcome.

And "the risk is of a recession in the first half of 2022 is high," says Diana Mousina, Economist at AMP Capital. 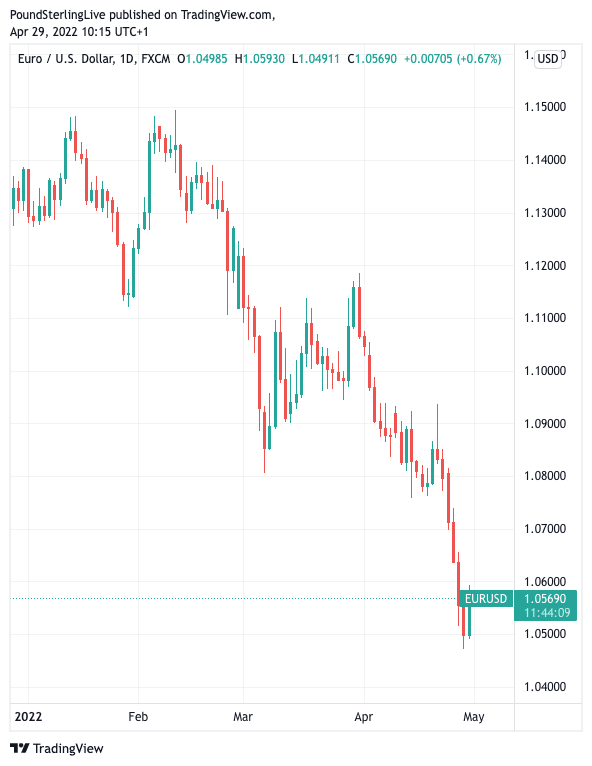 Whether the Eurozone slips into recession or not would impact on how the ECB approaches the question of raising interest rates, which will in turn have implications for Euro exchange rates.

If the economy were to suffer a recession the ECB might row back on indications it is now willing to raise rates as soon as July in order to fend off inflation.

Any retreat on current ECB rate hike pricing would likely deprive the Euro of support.

Foreign exchange strategists at Italian bank UniCredit say the significant uncertainty across markets means there is now a need to focus on "extreme scenarios" pursued by the ECB.

They say the ECB could either:

1) Decide to backpedal on its policy 'normalisation' plans (i.e. move towards raising interest rates) in the face of a full-blown recession in the eurozone.

2) Raise interest rates in order to get inflation back on track.

"In the dovish scenario, the ECB backpedals from its normalisation plans to address a full-blown recession across the eurozone even in the face of inflation approaching 10%, while in the hawkish scenario, the ECB becomes restrictive, lifting the deposit rate to 2.0-2.50%," says FX Strategist Roberto Mialich with UniCredit in Milan.

The ECB will likely proceed with rate hikes and policy 'normalisation' if recession is avoided.

"If recession is avoided and if the market continues to look ahead to ECB policy tightening in 2022 we would expect that EUR/USD parity will also be side-stepped," says Foley.

The Euro fell to its lowest level in five years Thursday in the wake of news of Russia's decision to stop gas flows to Bulgaria and Poland, while threatening similar action against other countries that refuse to pay in Rubles.

The Euro to Dollar exchange rate fell to a low of 1.0408 as a sell-off in the single currency entered a 6th consecutive day.

"With Covid lockdown fears in China exaggerating upside risks for the USD we recognise the possibility of a stronger-for-longer USD," says Foley.

Given the recent changes to the global backdrop Rabobank are reconsidering their 6-month EUR/USD forecast that currently envisages a move back to 1.10.

Analysis from investment bank MUFG meanwhile finds the long-term trendline support from the lows in 2000, 2001 and in 2020 have now been breached by EUR/USD, leaving the technical backdrop to reinforce the negative fundamental backdrop.

"Talk of EUR/USD reaching and possibly breaching parity even just a few weeks ago seemed a tall order but the declines now on this potentially damaging development means such a scenario is no longer such a tall order," says Derek Halpenny, Head of global and EMEA markets strategy at MUFG.

Viraj Patel, strategist at Arkera, says he thinks the EUR/USD exchange rate is course to get "pretty close" to the psychologically important level of parity.

One reason why this level is achievable is because sentiment for such a move is not crowded, he notes.

Jeremy Boulton, a Reuters market analyst, says the chance EUR/USD drops to below parity is now greater than was the case during the Eurozone debt crisis of the early 2010s.

"Demand for dollars resulting from a significant tightening in U.S. monetary policy is likely to fuel a bigger drop than in 2015 when a bet on the end of the single currency led traders to a record short position and the pair fell to 1.0457," says Boulton.

"In 2015 ECB polices were designed to save the euro. Current policies are weighing upon it and there is a likelihood of greater divergence with the Federal Reserve not only set to raise rates in a big way but also reduce the balance sheet. This could drive EUR/USD much lower," says Boulton.

Kit Juckes, head of FX research at Société Générale, says it is too soon to buy the Euro on the back of the recent strong sell-off.

"Were it not for the war, I'd be keen on buying this euro dip," says Juckes, "but as it is, there is more downside and positioning provides no support."

He says the war in Ukraine seems more likely to drag on than end soon, and as well as the human suffering that implies, further tension between Russia and the west seems inevitable.

Furthermore Juckes says markets are expecting too much from the European Central Bank by way of interest rate hikes this year: some 75 basis points of hikes are expected.

He describes this as "implausible".

"The economic threat from the conflict is simply too great to buy dips yet," he adds.