The Euro could fall to par the Dollar, or rise back to 1.15 says Italian lender UniCredit who see one of two scenarios playing out over coming weeks.

UniCredit says the significant uncertainty across markets means there is now a need to focus on "extreme scenarios" pursued by the European Central Bank (ECB).

The ECB could either:

1) Decide to backpedal on its policy 'normalisation' plans (i.e. move towards raising interest rates) in the face of a full-blown recession in the eurozone.

2) Raise interest rates in order to get inflation back on track.

"In the dovish scenario, the ECB backpedals from its normalization plans to address a full-blown recession across the eurozone even in the face of inflation approaching 10%, while in the hawkish scenario, the ECB becomes restrictive, lifting the deposit rate to 2.0-2.50%," says FX Strategist Roberto Mialich with UniCredit in Milan.

Hints that the ECB is looking to tighten policy were provided by a host of ECB Governing Council members this week who all pointed to the need to raise interest rates before year end.

Most prominent amongst them was ECB Vice President Luis de Guindos who said a rate rise by July could be entertained.

Euro exchange rates rallied in response to an apparent 'hawkish' shift at the ECB.

Under their hawkish scenario, UniCredit sees the ECB pushes the depo rate 100bp beyond the 1.50% peak now priced in by markets over a two-year horizon.

"Regression analysis suggests that the shift induced in the interest rate differential between the ECB deposit rate and the fed funds target rate would be consistent with a EUR-USD rebound back towards 1.15," says Mialich.

But the war in Ukraine continues, posing headwinds to the EU via higher energy prices and a recession in the Eurozone cannot be ruled out should the war and associated sanctions intensify.

"In the dovish scenario, the ECB abandons its plans for policy normalization and might consider an expansion of its asset purchases, thereby depriving the EUR of what has likely slowed the pace of its fall against the USD so far," says Mialich. 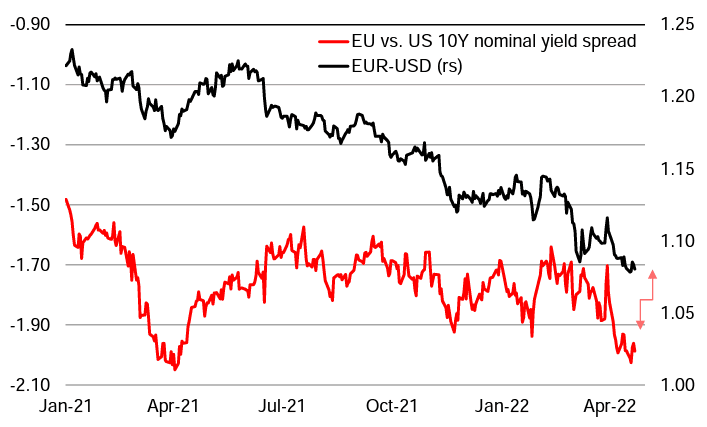 "EUR-USD up and down 1.08 as a reflection of swings in the EU and U.S. long-term spread. - UniCredit. Data sources: Bloomberg, UniCredit Research.

"The removal of this brake will likely speed up the pair’s fall towards parity, with 1.05 as an intermediate target," he adds.

The ECB will however be reluctant to entertain such a dramatic fall in the value of the Euro as such a decline would likely push up the cost of energy imports further, exacerbating the Eurozone's woes.

"A likely step-up in the bank’s FX rhetoric will probably steady the pair at the edge of parity. The EUR-USD drop will probably also depend on whether the Fed reduces the intensity of its tightening if the US economic expansion softens too," says Mialich.

We reported Friday that there are signs the ECB's recent hawkish pivot could indicate they are keeping one eye on the currency.

"A final development that will trigger early ECB action is the decline in the euro," says Kounis, adding:

"This decline could accelerate if the ECB falls too far behind other major central banks in raising interest rates."