Europe’s single currency rallied more than 100 points to reclaim the 1.13 handle ahead of the weekend as a rout in global markets prompted investors and traders to liquidate positions in riskier currencies, leading to a surge in demand for Euros and other funding currencies in the process.

Just like the Yen and Swiss Franc the Euro had been sold widely in recent times by investors seeking to fund wagers on higher yielding or simply more attractive currencies including the likes of the Canadian and Australian Dollars, although these positions were quick to be cut in last Friday’s sell-off.

“The key driver has been the significant shock to risk markets, reflecting the emergence of the Omicron variant. The result has been a massive squeeze in EUR-funded carry positions. We also think that liquidity and seasonal effects have also played a role,” said Mark McCormick, global head of FX strategy at TD Securities, in a Friday note after having closed one of TD’s wagers against the EUR/NZD rate.

The process of exiting bearish bets against the likes of EUR/NZD or EUR/CAD does involve, behind the screens, a bid for the Euro-Dollar rate and helps to explain how the single currency leapt on Friday in what was its largest intraday rally since May. 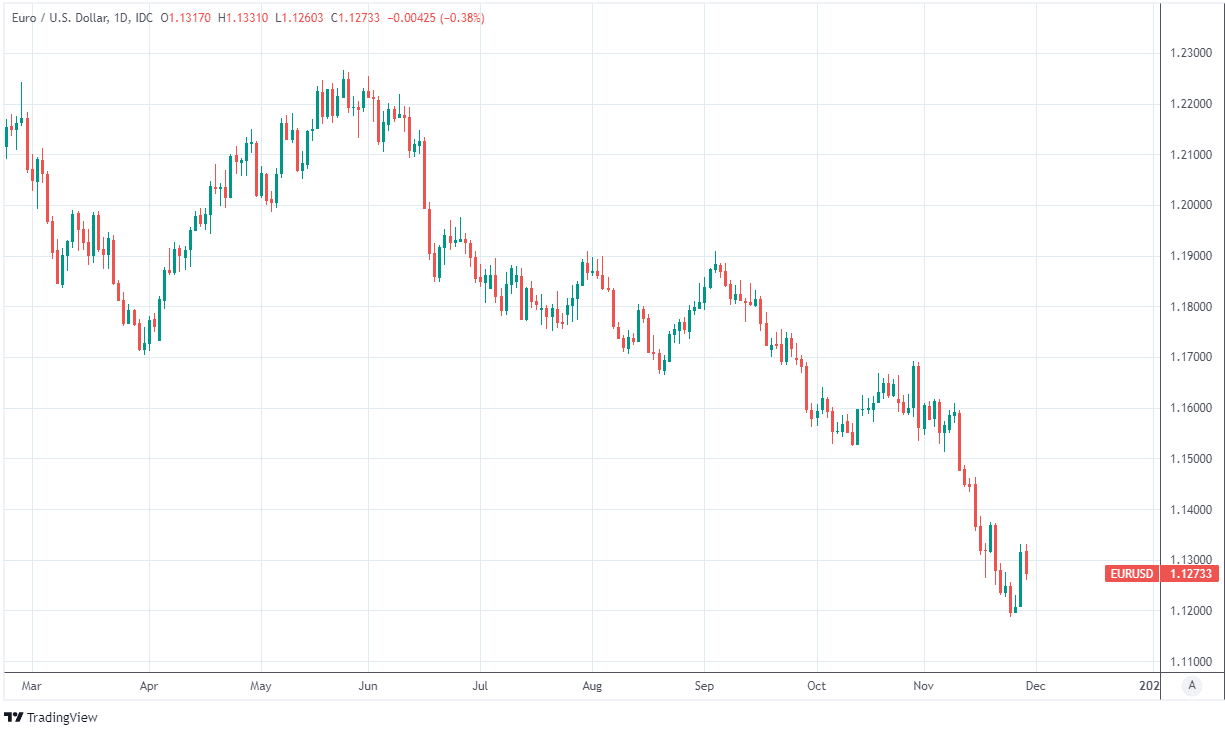 The Euro-Dollar rally and the underlying global market sell-off were catalyzed by the detection of a new coronavirus variant in Africa, which prompted a number of governments to impose travel restrictions or adopt more stringent entry requirements for international travellers.

The rub for the Euro-Dollar rate however, is that if global markets were to stage a rebound this week then the single currency could at the least struggle for further traction and may even be likely to unwind its Friday gains, which is possible given how little is known about the new disease.

"Cases in SA: were mostly amongst young and un-vaccinated (university students), but symptoms were mild. WHO said in a statement that there is no information to suggest symptoms differ from other variants," says Jordan Rochester, a strategist at Nomura.

"It’s small so far, but EUR/USD has come off from the highs, even ZAR is up on Friday’s close. Perhaps with markets back to full liquidity we see this bounce in risk continue," Rochester wrote in a Monday note.

The concern in some parts has been that the new and highly mutated strain of the coronavirus will prove more infectious and as damaging to some of those who contract it as the other dominant strains in circulation.

This would likely be all that some countries’ governments need to see or hear before reimposing economically damaging restrictions on business activities and social contact, although there was not yet any evidence to suggest the new strain is any more potent on Monday.

The risk of a new and problematic strain of virus entering circulation has emerged at an awkward time for the Euro given that many governments on the continent had already resorted to reimposing damaging containment measures of various forms due to the ongoing spread of earlier strains.

"Markets and politicians will have to make assumptions, and judging by the newsflow on Friday, they're jumping the gun," warns Claus Vistesen, chief Eurozone economist at Pantheon Macroeconomics.

“In the Eurozone, where cases have been soaring in the past month, the news of a nasty new variant increases the risk of new restrictions, especially in Germany where politicians have been debating this issue fiercely in the past week,” Vistesen told clients in a Friday note.

The Netherlands was just the latest at the weekend to ramp up restrictions on business activity and social contact when instructing supposedly non-essential businesses to close their doors each day from 17:00. 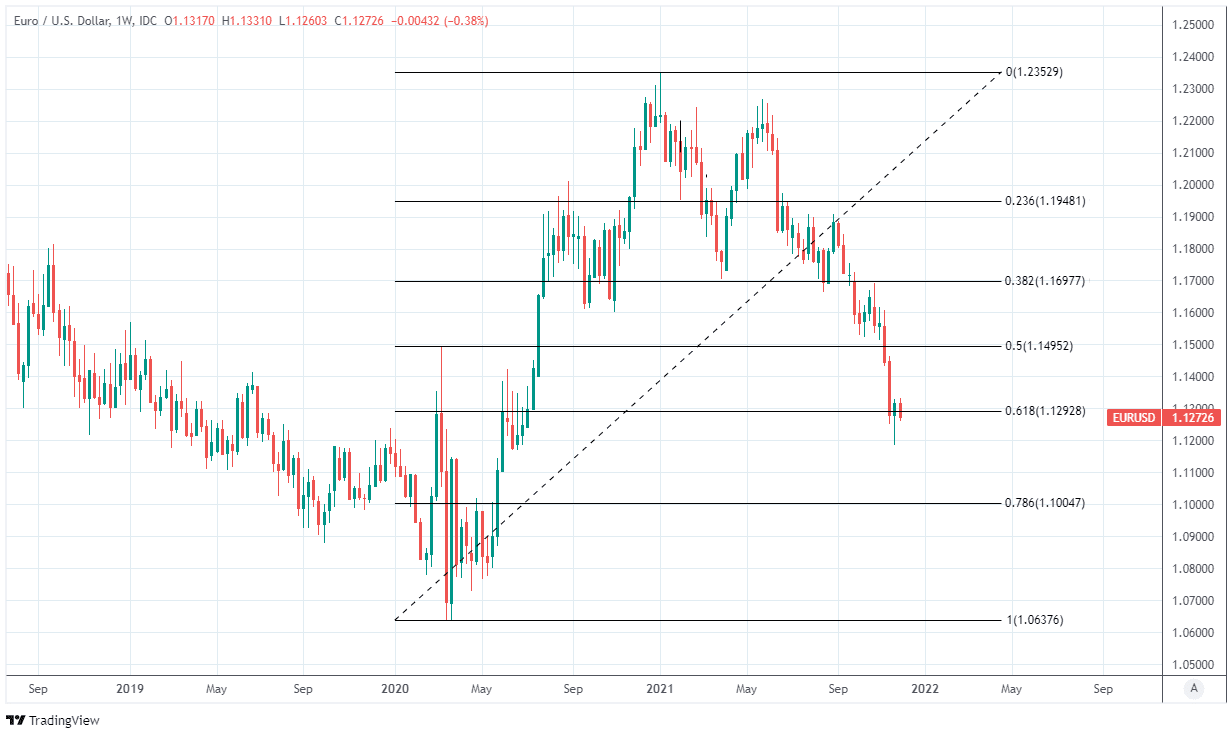 The return of containment measures would act as a headwind to the Eurozone economic recovery even without the risk of a new variant that proves to be a more potent challenge than others in circulation and is one reason why this week’s Eurozone inflation data could go overlooked by the market.

“Simultaneously surging virus cases and inflation also complicate the ECB's deliberations about the PEPP at the upcoming monetary policy meeting,” says Marc Cus Babic, an analyst at Barclays. “Our view remains that the ECB will maintain a very accommodative monetary policy stance in 2022.”

Tuesday’s inflation data is the highlight of the week for the Eurozone calendar until European Central Bank President Christine Lagarde speaks about “Financing the Covid recovery with new economic headwinds” at a Reuters online event on Friday morning.

The Euro-Dollar rate could be more sensitive however, to the ebb and flow of risk appetite in global markets as well as any further insights into the Federal Reserve policy outlook that might be offered by the seven different Fed rate setters who’re set to speak publicly over the course of the week.

These various speeches follow Monday and Tuesday appearances in Congress by Fed Chairman Jerome Powell, all of which will be listened to closely by the market for clues on whether the new virus strain is something that could prevent the Fed from accelerating the pace at which it tapers the bank’s quantitative easing programme and begins lifting U.S. interest rates.

This is after minutes of November’s Fed meeting revealed last week that some of the bank’s policymakers have been considering advocating exactly that course of action, which had weighed heavily on the Euro-Dollar rate before last Friday.