- U.S. inflation at 30 year highs
- Pressure grows on the Fed to act
- USD is bid
- But some economists say Fed will remain patient
- Others forecast inflation to approach 6.5%

The Dollar pushed higher against the Euro, Pound and all other major currencies in the wake of the release of U.S. inflation data that showed prices were rising at rates last seen in the early 1990s, leading economists to warn the Federal Reserve will have to take notice.

The Dollar was already on the front foot heading into the release but it accelerated its advance after it was reported U.S. core CPI surged to +0.6% month-on-month in October, up from 0.2% in September well ahead of the consensus estimate for 0.4%.

"Price pressures were scorching hot in the US in October," says economist Katherine Judge at CIBC Capital. "This print will leave more doubts in the Fed's mind about how long they can let this inflation run."

The Pound to Dollar exchange rate fell by a similar amount to land onto the round 1.35 figure and keeping alive a multi-week downtrend that is being tipped to extend.

The market reaction suggests investors are of the view that the Federal Reserve will be inclined to speed up the rate at which it tapers its quantitative easing, which could in turn hasten the timing of a first rate hike. 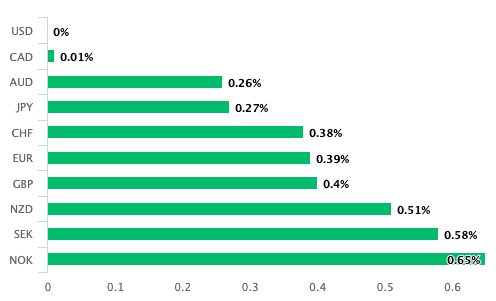 Above: The USD advanced against all G10 rivals on November 10.

"The U.S. dollar ascended to session highs after hotter inflation," says Joe Manimbo, Senior Market Analyst at Western Union Business Solutions. "A broadly firmer greenback rose toward multiweek peaks versus sterling and the Canadian dollar, and flirted with highs for the year against the euro."

CIBC Capital Markets anticipate price pressures will ease after some calming on the supply chain front by mid-2022, but they warn the country's labour market will only likely tighten further by that time, which will keep inflation sustainably above the Fed's target.

"Well this is a mess, an inflation report so bad even the Fed might actually do something about it?" asks Neil Wilson, Chief Market Analyst at Markets.com. "Gold has blown past resistance and the path to $1,875 is clear. Stocks offered and the dollar is bid." 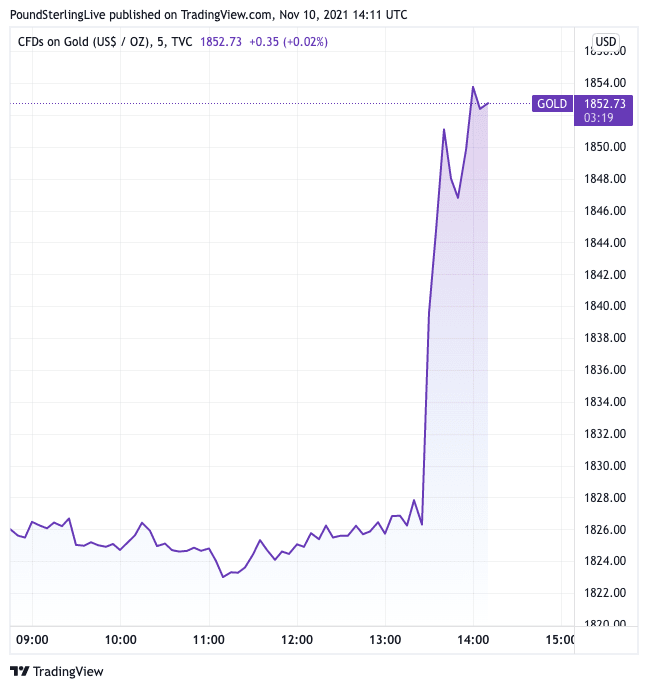 Above: Gold - the ultimate fledge against inflation - surged on the hotter-than-expected U.S. inflation data.

Money markets are priced at levels that are consistent with a rise in the Federal Reserve's basic interest rate from September 2022, which is already well ahead of the Fed's own guidance for a first hike coming only in 2023.

The inflation numbers suggest there is scope for the market to bring forward expectations further, which would aid the Dollar higher.

Ian Shepherdson, Chief Economist at Pantheon Macroeconomics says inflation is set to breach 6.0% and only peak in early 2022, placing massive pressure on the Fed to act.

"The underlying story here remains a combination of supply constraints, soaring labor costs, and the reopening, though the latter is now a small part," says Shepherdson.

"We have no problem believing that supply constraints will ease markedly over the next year and do not require a monetary policy response, but the Fed is now putting a great deal of faith in the idea the wages soon will be constrained by rebounding participation, and that stronger productivity growth will hold down unit labor costs growth too," he says.

Such an assumption is by no means certain though warns Shepherson, saying core CPI inflation is going to rise further; "the October print is not a fluke".

Pantheon Macroeconomics now expect U.S. core CPI inflation to peak at 6-to-6.5% in February or March next year, "massively increasing the pressure on Chair Powell and other Fed doves".

"Inflation has soared to a 30-year high, and the FOMC has come around to the view that heightened inflation is likely to persist longer than initially thought. Expectations for raising the fed funds rate have been pulled forward as a result," says Sarah House, an economist at Wells Fargo.

But House says the Fed could wait to tighten policy until it is clear that inflation pressures are more entrenched and broad-based, but says falling "behind the curve" risks an ultimately stricter policy stance that could induce a recession.

But Wells Fargo finds that there is limited scope for the Fed to control inflation in the current environment:

Wells Fargo expects the FOMC will be content to let the tapering of its asset purchases continue over the next few months while offering little firm forward guidance one way or the other on future rate hikes.

"If this seems a bit odd, bear in mind that the FOMC may be concerned about a policy mistake in both directions," says House.

If this assessment is the correct one buyers of the Dollar might be disappointed as the scope for a material shift forward in rate hike expectations will remain limited, offering the under pressure EUR/USD and GBP/USD some downside protection.