- EUR/USD finds support around major averages
- Fall broken at 1.1570; may see corrective bounce
- On any USD profit-taking but vulnerability to linger
- Risks fresh losses as Fed policy limits any recovery

The Euro-to-Dollar exchange rate found support at major moving-averages marking new 2021 lows last week but it would be likely to see fresh losses if the U.S. Dollar renews a recently stalled appreciation during the week ahead.

The Euro managed only a tepid rally in the hours following September’s Flash inflation data revealed strong increases in both measures of Eurozone price growth last Friday, likely as they do little to shift European Central Bank (ECB) monetary policy in a supportive direction for the Euro.

While Friday’s recovery was faint and the Euro-Dollar rate entered the new week barely more than forty points higher than its new 2021 at 1.1560, it benefits from formidable technical support levels nearby in what is set to be a quiet period for the European economic news but a defining week for Federal Reserve (Fed) monetary policy.

“EUR/USD has continued its descent to reach the 200-week ma at 1.1575, please note the 55-month ma is also found here at 1.1560 and we would allow for some profit taking in this vicinity,” says Karen Jones, head of technical analysis for currencies, commodities and bonds at Commerzbank.

Jones said on Friday that profit-taking could aid the Euro in the short-term but warned of technical resistance overhead at 1.1717 and 1.1807 before reiterating a one-to-three week target of 1.1395 for the Euro-Dollar rate.

This is after the Euro-Dollar rate buckled last week in response to a noisy cacophony of investor fears about what triple digit percentage gains in natural gas prices might mean for the European economic recovery, and a continued response to September’s ‘hawkish’ Federal Reserve policy update. 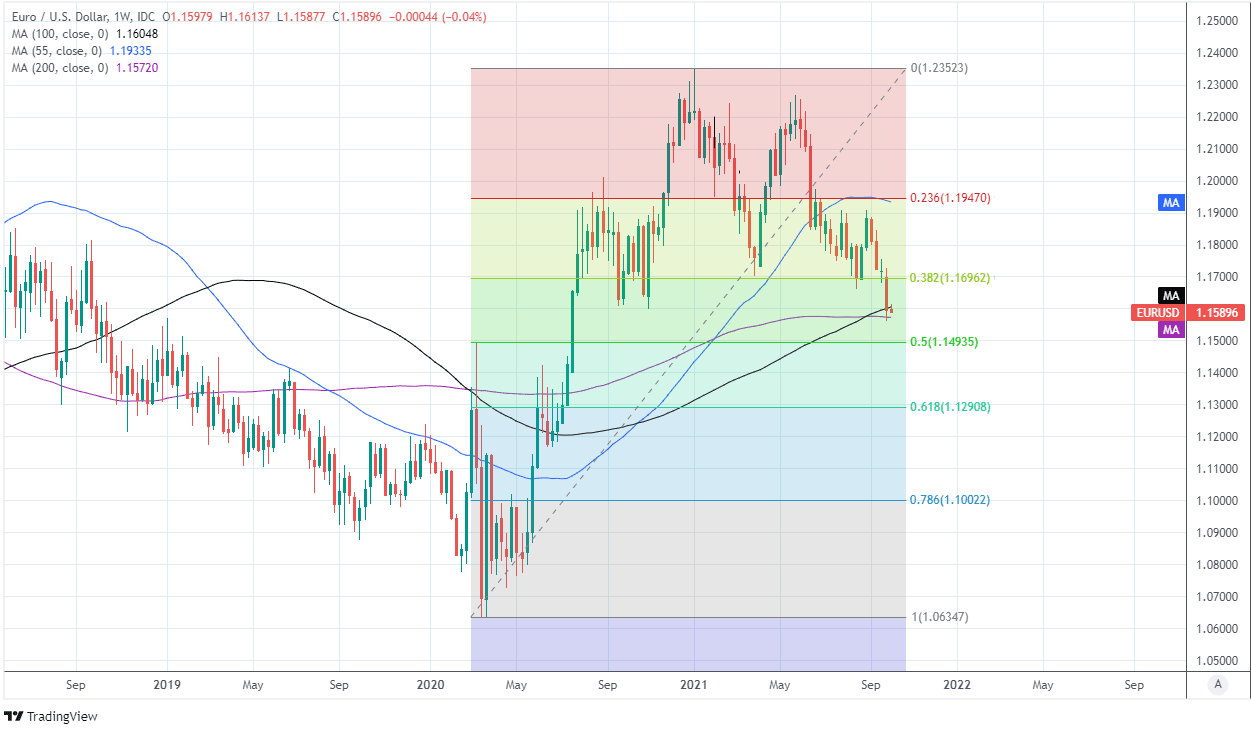 ICE natural gas futures prices had risen 366% for 2021 and by 494% for the 12 months to last Friday, leading some analysts to warn of knock-on impacts that could see household energy costs rising so far that they crimp spending in other areas and deliver a setback to the economy.

Such fears are limited in relevance to just Europe however, as energy prices and supplies have also disrupted activity in both China and the UK, posing risks to economic rebounds in those countries while also helping the Dollar to strengthen across the board.

“For the Dollar to stabilize we will likely need to see equity markets find their footing, and for markets to get more comfortable with the idea that central bank policy normalization will not derail the economic recovery,” says Zach Pandl, co-head of global foreign exchange strategy at Goldman Sachs.

Global growth concerns are typically supportive of the Dollar but its recent appreciation also comes amid recognition in the market that the Federal Reserve could raise interest rates as soon as late 2022 after an anticipated winding down of its $120BN per month quantitative easing (QE) programme.

That tapering process would be likely to end around the middle of next year if announced at the end of the Fed’s next meeting on November 03, which would be almost a certainty if Friday’s U.S. non-farm payrolls report is anything other than outright poor.

“Technically the dollar looks on the verge of a significant break-out and a strong US jobs report could cement that trend,” says Chris Turner, global head of markets and regional head of research for UK & CEE at ING.

Turner and colleagues warned last Friday that the Euro-Dollar rate could slip as far as 1.15 if Friday’s job report is perceived by the market as sufficient to meet the low bar that has been set by Chairman Jerome Powell in September’s Fed policy press conference.

Powell said “it wouldn’t take a knockout, great, super strong employment report. It would take a reasonably good employment report” for him to join the “many” at the Fed who already view the present time as appropriate to begin weaning the economy and markets off its yield and interest rate suppressive policy support.

The median estimate in a Bloomberg survey suggests the U.S. economy likely created 500k jobs last month, which would be around the middle of the range of numbers seen this year. 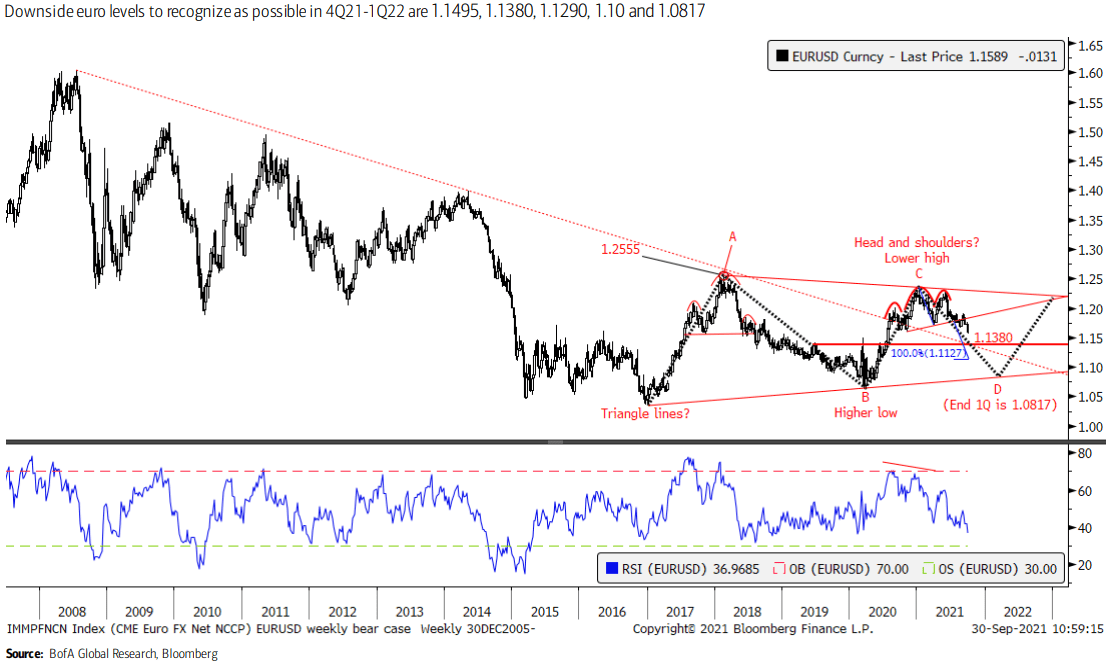 Above: BofA Global Research EUR/USD chart with technical indicators and analysis. Click on image to enlarge.