The next major test for the U.S. Dollar will be Wednesday night's update from the Federal Reserve (Fed).

The Fed is expected to offer its updated views on the recent slowdown in U.S. economic activity while detailing plans to end its quantitative easing programme.

Current expectations are for the programme to be tapered starting in either November or December.

Should these dots imply a rate rise could occur as early as 2022 the Dollar could appreciate in value, pushing the Euro-to-Dollar exchange rate back towards the 2021 low at 1.1664.

Significant upward revisions to 2022 as well as 2021 inflation projections would also be delivered under such a scenario.

The Euro-Dollar exchange rate could fall to 1.1660 says TD Securities who see a 25% possibility of such an outcome. 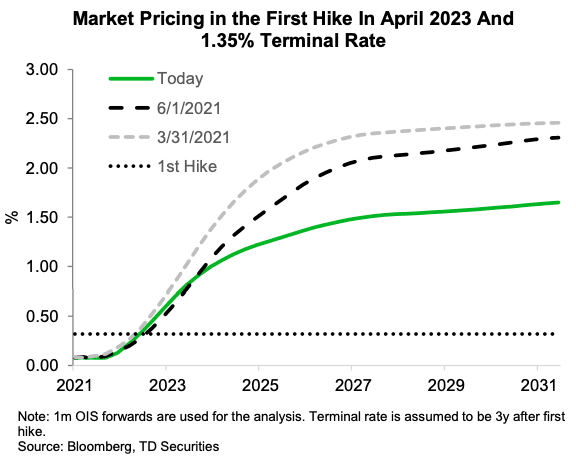 Readers looking to gain exposure to the EUR/USD can do so with spreads as low as 0.2 pips from Vantage FX. For more information, please see Vantage FX spreads and commission.

There would be no definitive signal on taper timing, but the economy is judged to be close to achieving the required "substantial further progress," required to start the withdrawal of monetary support, even with some cooling in growth recently.

The Euro-Dollar is seen at 1.1750 in response to such an outcome.

Strategists say a 'dovish' outcome - that results in Dollar weakness - would see the Fed say the economy is closer to achieving "substantial further progress," but no definitive new signal on tapering is offered.

This would build on the theme introduced by Fed Chairman Jerome Powell in his speech to the Jackson Hole Symposium where he said interest rate rises would not necessarily occur soon after quantitative easing is ended.

But there would be virtually no changes to 2022/23 projections.

The Euro-Dollar is forecast to trade back up towards 1.1800 under such an outcome.