- EUR/USD holding above 1.18 but risks a slide to 1.17
- As Fed’s minutes offer clarity on QE taper & rate plans
- ECB stance emphasises scope for divergence from Fed

The Euro-to-Dollar exchange rate has held above 1.18 but could be at risk of slipping back to April’s lows around 1.17 over the coming days if minutes from last month’s Federal Reserve (Fed) meeting provide investors with cause to further reduce earlier bets against the greenback.

Europe’s unified unit was back above technical support around 1.1824 on Monday following fresh losses for U.S. exchange rates that came in the wake of last week’s non-farm payrolls report for June, though with the outlook for it hanging in the balance.

This week’s domestic highlight is Thursday’s 12:00 London time release of minutes from last month’s European Central Bank (ECB) meeting, although these come only after the record of June’s Fed meeting is released on Wednesday at 19:00.

“EUR/USD remains fragile and the better-than-expected NFP headline number will keep open the possibility of a drop to 1.1700. Expect the FOMC minutes on Wednesday to have a big say in how low EUR/USD goes this coming week,” says Petr Krpata, chief EMEA strategist for currencies and interest rates at ING.

Last month’s policy announcement included Federal Open Market Committee forecasts which indicated the Fed could be likely to begin lifting its interest rate in 2023 if-not sooner, although the danger is that this week’s minutes not only reinforce those expectations but also bring attention to bear on its $120 billion per month quantitative easing (QE) programme and questions about what would be the most appropriate time to begin winding it up. 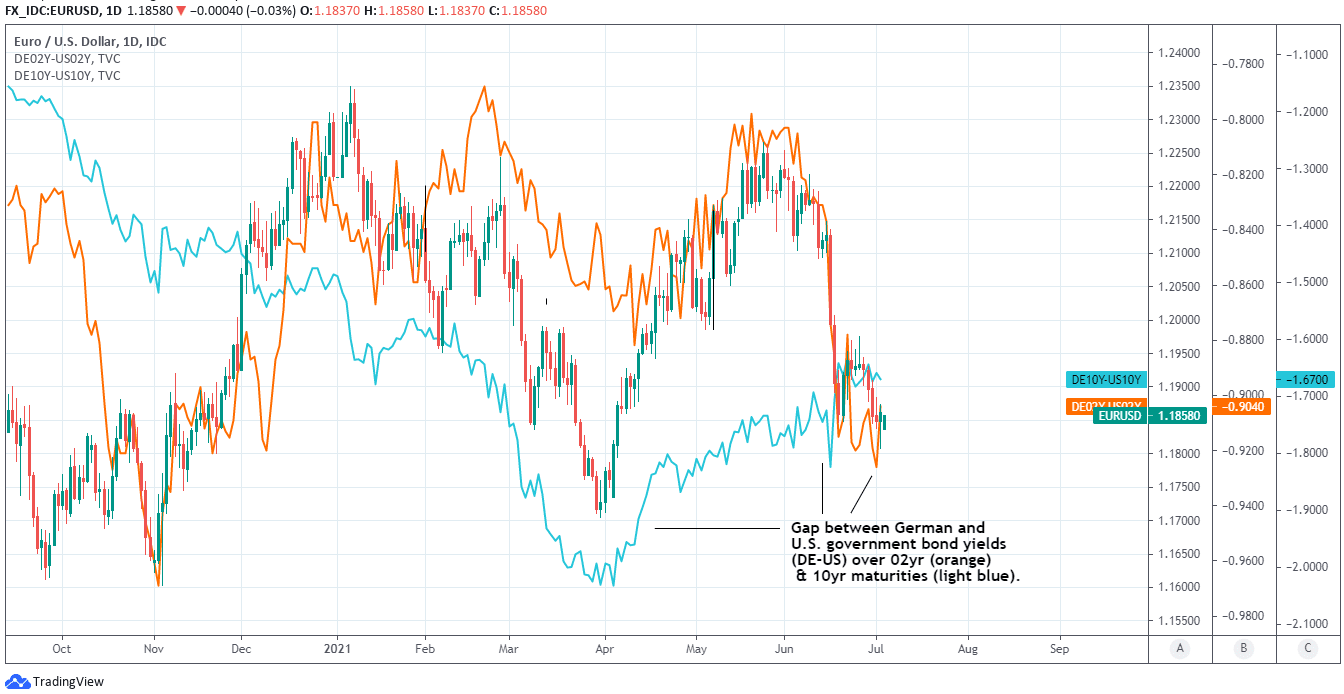 The latter would be what’s commonly referred to as a “tapering” process, any confirmation of which could potentially lift American bond yields and in the process push the gap between German and U.S. yields - known as the DE-U.S. ‘yield spread’ and pictured above - further below zero.

“We do expect that a taper announcement will be a key catalyst for a sustained 2H USD rally. And for now, at least, monetary policy expectations continue to trend in USD's favor,” says Ben Randol, a strategist at BofA Global Research.

Lower German-U.S. yield differentials depicted by the blue and orange lines in the above graph show the impact the Fed’s tentative policy pivot has already had on the relative-return offering of equivalent European government bonds compared with the yields paid by U.S. government bonds.

These would shift further against the Euro-Dollar rate if this week’s minutes suggest the Fed is now actively considering reducing its footprint in the U.S. bond markets, although it remains to be seen if the bank has actually gotten that far.

“We are not yet convinced that real yields are offering enough support to allow a sustained and significant rally in the value of the USD vs. the EUR back to levels seen at the start of last year. While we have adjusted down our 1 month EUR/USD forecast from 1.20 to 1.19, we are holding our 6 month forecast at 1.17,” says Jane Foley, head of FX strategy at Rabobank.

Wednesday’s minutes from the Fed will be followed at 12:00 on Thursday by equivalent records of the ECB’s June meeting, which are unlikely to afford much support for the Euro, especially as the Frankfurt-based institution said last month that it’s own €1,850 billion bond buying programme will continue “until at least the end of March 2022 and, in any case, until the Governing Council judges that the coronavirus crisis phase is over.”

The ECB noted in June that risks to the Eurozone had become more “balanced” since the vaccine rollout got underway in April and the bloc’s economic reopening process began, but it warned just last week that new strains of the coronavirus were “weighing on the balance of risks.”

“The ECB has reaffirmed its commitment to stand behind the bloc’s bond markets and is still pledging to maintain “favourable financing conditions”. We think that sovereign yields in the bloc will rise only a little in the next couple of years, and that the yield spreads of periphery countries will stay very low, as the central bank keeps policy loose for longer than is widely anticipated,” says Andrew Kenningham, chief European economist at Capital Economics.