The Euro is tipped to enter a 'bear trend' against the Dollar in the second half of the year by foreign exchange strategists at French investment bank BNP Paribas, although those holding euros will take heart from Eurozone consumer confidence that is approach record highs.

In a regular quarterly research briefing BNP Paribas says the Dollar faces a "balanced" outlook over the remainder of 2021 as U.S. yields start outpace those in other jurisdictions.

Indeed, the Euro will join the Yen and Swiss Franc in the basket of currencies that find their upside potential is capped by the low sovereign bond yields on offer in the Eurozone, Japan and Switzerland.

"We expect the USD to outperform low beta currencies and underperform high beta. In other words, we think currencies with anchored yield curves (JPY and CHF) will underperform those where yields reprice higher and whose currencies are more sensitive to commodities and equities," says Sam Lynton-Brown Head of G10 FX Strategy at BNP Paribas. 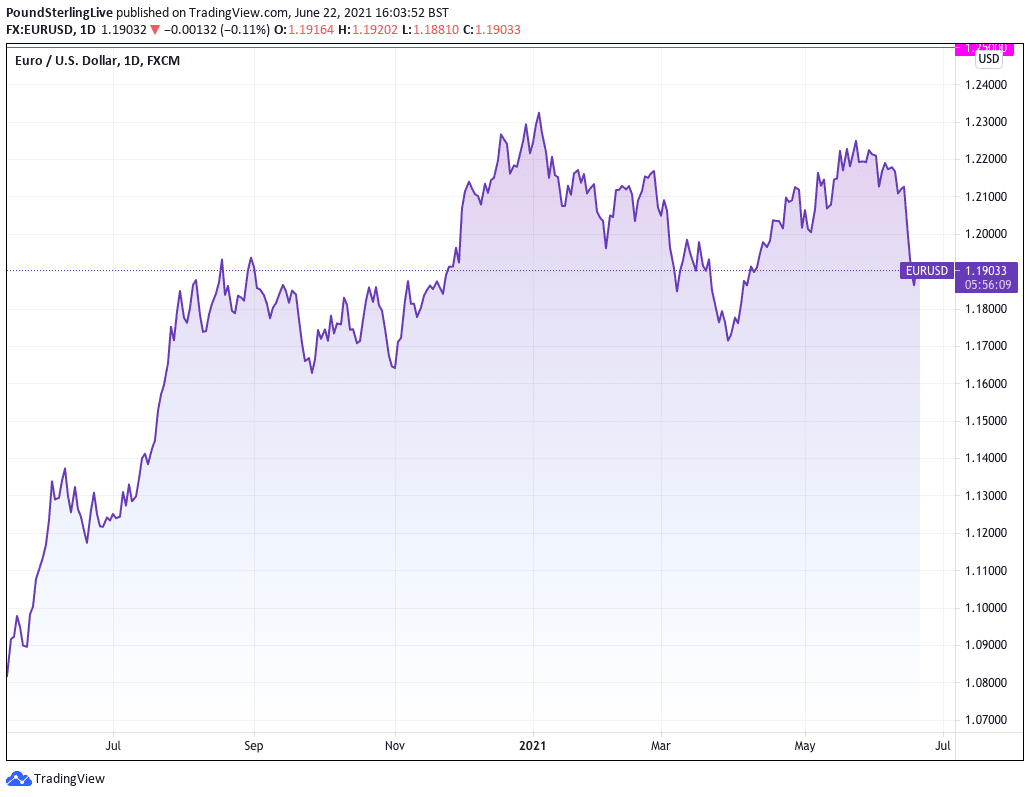 The yield paid on U.S. bonds rose in the wake of the June Federal Reserve (Fed) policy meeting which resulted in market expectations for a first interest rate hike moving forward into 2023.

Previously the market had expected the first interest rate rise to occur in 2024 but members of the Fed shifted this view when they raised their own projections for the central bank's base rate.

The Dollar rose sharply in the wake of the development, confirming central bank policy and resultant moves in bond yields as key drivers of currencies at the present time.

The European Central Bank (ECB) is expected by BNP Paribas to only raise interest rates in 2024, two years in the wake of the Fed.

The Fed's early mover advantage in this regard is expected by foreign exchange strategists at the bank to pressure the Euro, which they say has now likely peaked.

Euro bulls will nevertheless take heart from signs the Eurozone's economy is potentially entering a strong phase of expansion, at a time when the U.S. recovery is seen to already be incorporated 'the price' of the Dollar.

Hinting towards a strong European growth spurt was the release of Eurozone consumer confidence on Tuesday which reached pre-pandemic levels and is approaching all-time highs.

According to the European Commission, the Flash Consumer Confidence Indicator improved further in both the EU (1.5 points up) and the Eurozone (1.8 points up) compared to May 2021.

At −4.5 points (EU) and −3.3 points (Eurozone), the indicator is now scoring well above its pre-pandemic level.

The findings are significant in that consumer confidence is a key ingredient of economic growth and therefore the outlook for the Eurozone economy over the second half of the year is bright.

"Consumer confidence has surged from recessionary levels in February to the third highest reading in the past two decades," says Bert Colijn, Senior Economist for the Eurozone at ING Bank. "This bodes well for the consumption recovery in the months ahead."

A stronger-than-expected economic performance by the Eurozone over coming months could be supportive of Euro exchange rates given foreign exchange markets have become increasingly reactive to data releases once more.

Pound Sterling Live note emerging signals the UK's economic rebound had started slowing of late, posing the potential for the Eurozone to outperform just as the UK economy disappoints against expectations.

Such a contrast could potentially allow for the Euro to outperform the Pound.

"As economies reopen more structurally now that vaccinations have picked up and new cases have dropped, there's a good chance that retail sales and services will show strong growth over the summer months. This confirms our view of a fast-paced GDP recovery for the second, third and fourth quarter of 2021," says Colijn.