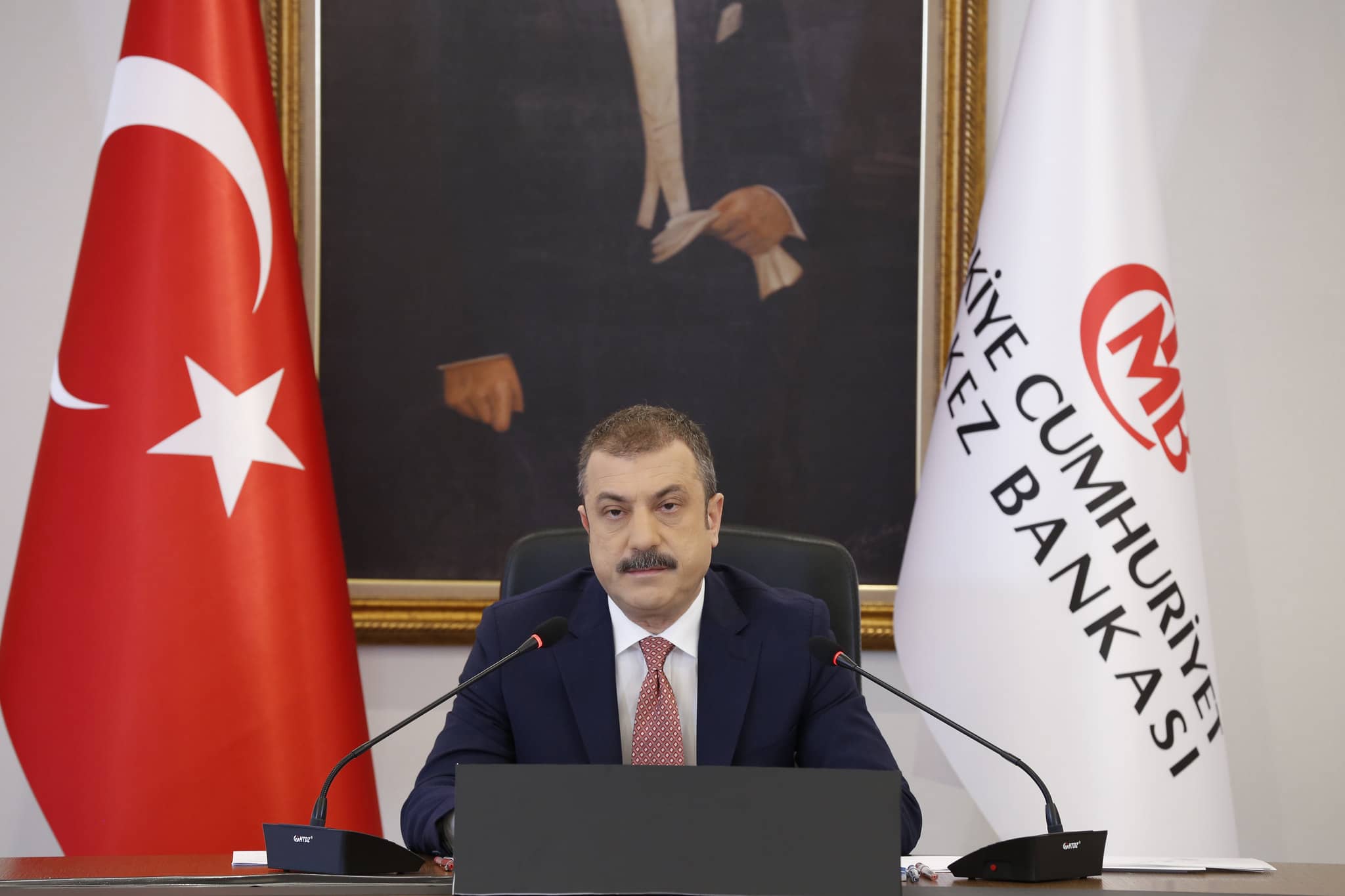 Above: File image of Governor of the CBRT, Şahap Kavcıoğlu. Image © TCMB.

The Turkish Lira was only a touch lower against the Dollar, albeit while many other emerging market currencies were edging higher, after the Central Bank of the Republic of Turkey (CBRT) left its interest rate unchanged at 19% and said it would not entertain a reduction of borrowing costs until its inflation objective is achieved.

CBRT rate setters are looking to reduce inflation to their 5% target over a three-year period, although consumer price growth rose 17.14% last month, according to data released on Monday, which was its highest level for more than two years and an outcome that underlined the long journey ahead of the bank.

“Taking into account the high levels of inflation and inflation expectations, the current monetary policy stance will be maintained until the significant fall in the April Inflation Report’s forecast path is achieved. Accordingly, the MPC has decided to keep the policy rate unchanged,” the CBRT said in a statement.

Few in the market had expected the bank to opt for an interest rate cut on Thursday although there are still plenty of analysts out there who say the bank is likely just biding its time in the hope that global market conditions eventually enable it to pull off an interest rate cut. 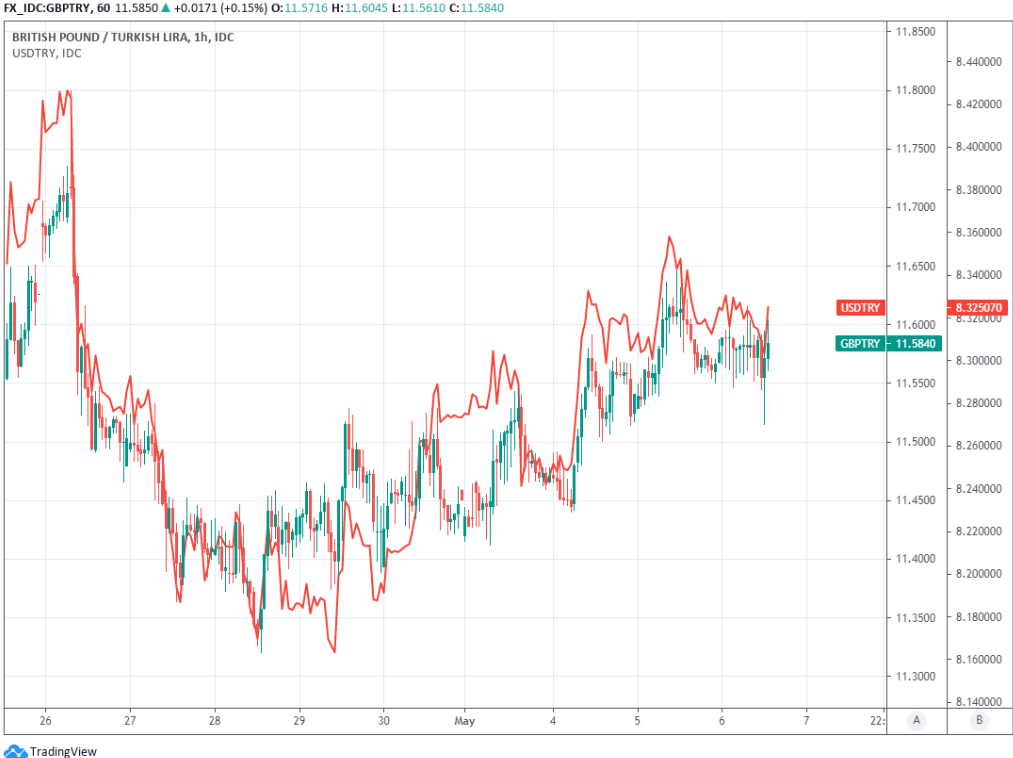 Above: GBP/TRY shown at daily intervals alongside USD/TRY (red) and EUR/TRY (green).

These lingering market suspicions have thus far prevented the Lira from backfilling the hole dug for it by Ankara in March when former CBRT Governor Naci Agbal was fired over a weekend in an apparent response to the prior week’s decision to lift the cash rate from 17% to its current 19% level.

“Despite the reassurances of the newly appointed governor, we think his appointment serves one scope only — ease monetary policy as quickly and deeply as possible,” says Cristian Maggio, head of emerging market strategy at TD Securities.

Meanwhile, the bank unde new governor Sahap Kavcioglu has continued to cite persistent currency depreciation resulting from speculation on international markets as well as other offshore factors like sharp increases in commodity prices for the current high levels of Turkish inflation.

The CBRT estimated in its April inflation report that six percentage points or just more than one third of last month’s 17.14% inflation rate could be attributed to the impact that past bouts of currency depreciation have had on the cost of imported goods. 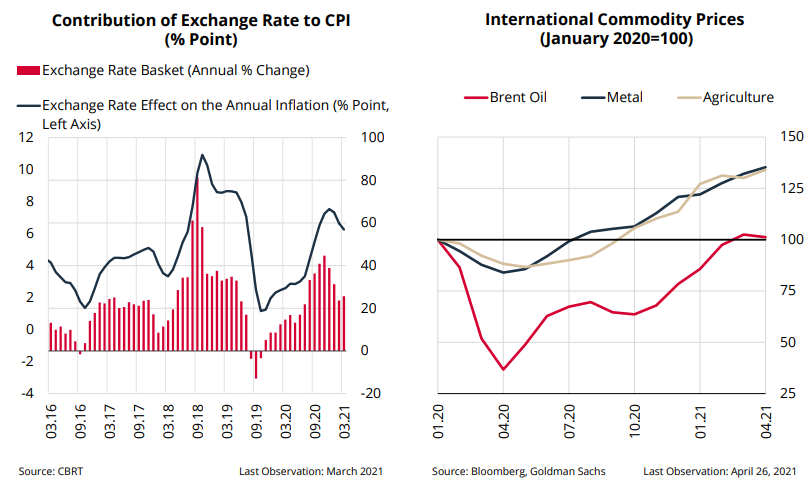 “We stick to the view that the risk to USDTRY is skewed towards the upside. We continue to target a break in USDTRY to levels above the all-time high of 8.58 later in the current quarter,” says Nimrod Mevorach, a strategist at Credit Suisse, in a Wednesday note to clients.

The apparent interference by political leaders in Ankara in CBRT monetary policy decisions, notably under PResident Recep Tayyip Erdogan, has seen international investors grow increasingly averse to holding the Lira and prolonged if-not exacerbated its vulnerability to repeated spirals of depreciation that simply serve to raise inflation even further.

Mevorach and the Credit Suisse team say “investors are going to remain sceptical about the willingness of the central bank to control inflation in a structural and persistent way,” as a result of the above factors and that this is likely to pose ongoing risks to the Lira.

Others see the global bond market having more sway over price action in the short-term. 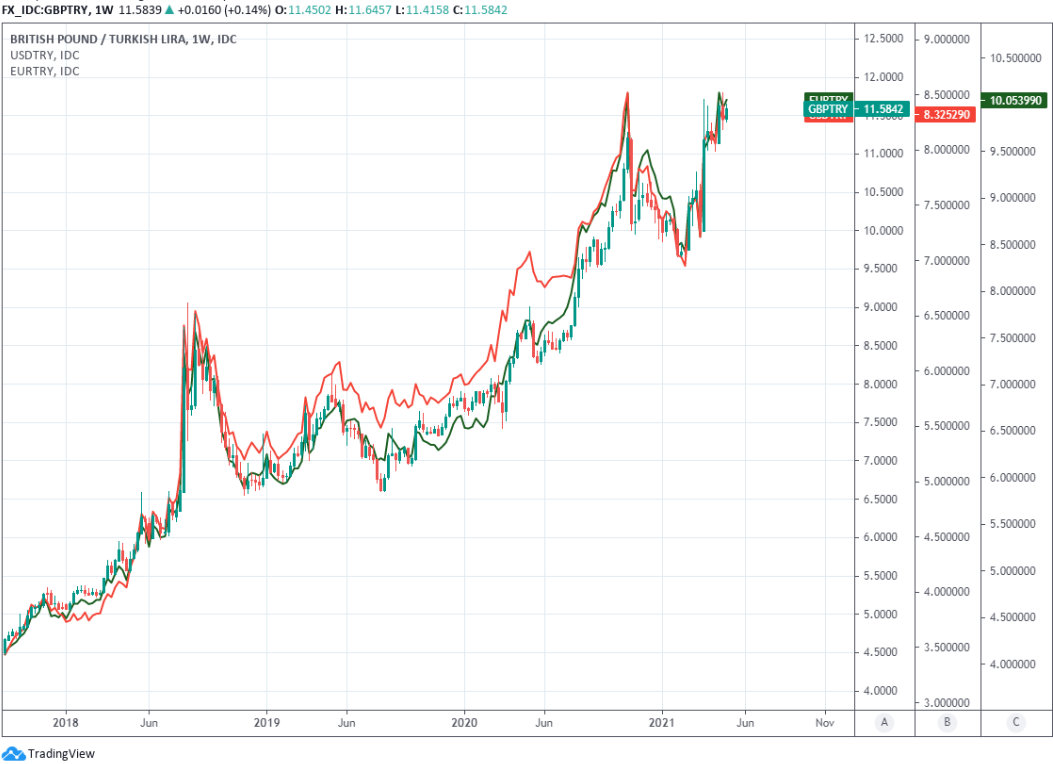 Above: GBP/TRY shown at weekly intervals alongside USD/TRY (red) and EUR/TRY (green).

"Should the global reflation expectations remain on pause for now, then the TRY weakness could be limited in the short term. In our base case scenario, we expect the central bank to maintain the policy rate until Q3, and the TRY to remain close to its current level in June," says Sebastien Barbe, a strategist at Credit Agricole CIB.

The expected recovery of the global economy later this year has been a major driver of rising commodity prices that are also contributing to Turkey’s inflation problem, as they have in turn lifted yields of U.S. government bonds and in the process put upward pressure on financing costs of all other economies including the Turkish one.

That means Turkish inflation pressures could rise as the global recovery unfolds, enhancing in the process the imperative for the CBRT to leave the cash rate unchanged at 19%, while the Lira would likely grow more vulnerable to renewed depreciation under circumstances even without any interest rate cut.

This is why many analysts still forecast the Lira to return to 2021’s all-time lows irrespective of CBRT policy over the coming months.