Analysts at the Milan-based lender and international financial services provider say the Dollar will likely struggle now that foreign exchange markets are entering a 'risk on' faze, and the Euro-to-Dollar exchange rate (EUR/USD) can retest 1.20 in the near-future as a result.

"A likely turnaround in the logic that has driven currencies in the past few weeks is probably underway in the FX market," says Roberto Mialich, FX Strategist at UniCredit Bank.

Mialich says buoyant risk appetite in foreign exchange is in part driven by two very strong data releases out of the U.S. of late – the March employment report that saw over 900k new jobs created and the ISM non-manufacturing survey which reached its highest level since 1997.

"Investors are being pulled out of safe-haven currencies and into riskier and other currencies more related to global growth," says Mialich. 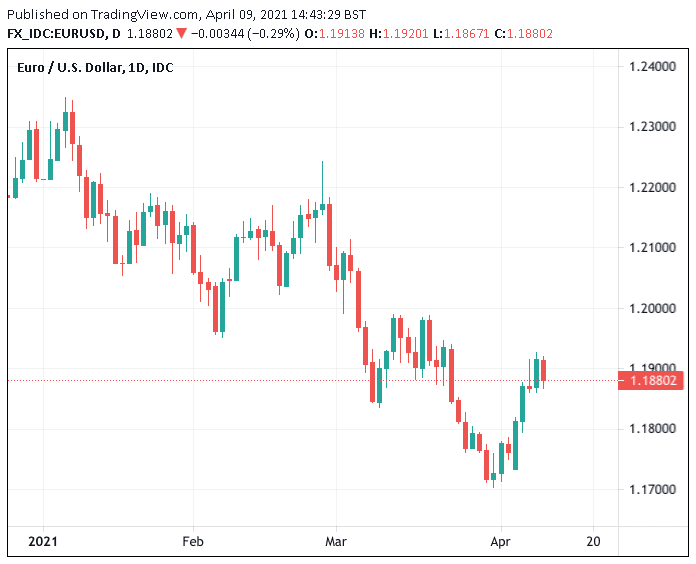 "This is a return to the logic prevailing in the currency market over most of 2020, until the abrupt and sharp rise of UST long-term yields gave the greenback a competitive advantage starting in mid-January," he adds.

The EUR/USD exchange rate fell to its lowest level since November 2020 on March 31, thanks in part to a multi-week resurgence in the Dollar.

The Euro has however rallied against its U.S. counterpart in April, taking the exchange rate to the cusp of 1.19 on April 08.

UniCredit tell clients a break of 1.19 is in the offing near-term, and a test of 1.20 will likely follow.

"The USD failing to appreciate further in the face of two undoubtedly strong signals that the US economy is accelerating reinforces our call that at this juncture most of the positive news for the greenback, and primarily from the US macro front, has been already factored in," says Mialich.

He adds the bar for more genuine Dollar strength has become quite high.

An obsession for global investors for much of the first quarter of 2021 was the rapid rally in the yield paid on U.S. government bonds, notably those with a duration of five years.

The rising yields signalled investors are increasingly anticipating inflation in the U.S. to rise sharply over coming months and years as an economic rebound gets underway.

Those rising yields in turn attracted foreign investment flows into U.S. bonds as investors sought out higher returns, driving the Dollar higher as a result.

But, UniCredit say support for the greenback from widening interest-rate differentials between the U.S. and the rest of the world has weakened too.

The 10Y UST yield has not only failed to rise in the face of strong US data, but even drifted to below 1.70% amid U.S. stock market outperformance.

From a technical perspective, he says the exchange rate must hold the 1.1834/1.1850 area to avoid renewed selling and attracting fresh buying interest.

"The acceleration of vaccinations across the eurozone would represent another key factor for any above-1.20 scenario," says Mialich.

We reported this week that an increasing number of analysts are of the view the Euro stands to benefit as the EU vaccination rate accelerates in April, allowing foreign exchange markets to focus on a strong Eurozone recovery in the second half of the year.

"If we look at the Euro area more broadly, the health situation looks better than the public debate might suggest. Despite the further twists and turns in the AstraZeneca saga, the overall pace of vaccinations is finally starting to surge," says economist Jan Hatzius at Goldman Sachs.

With supply expected to drastically increase in April, the blocs woes on the vaccination front now appear to be finally fading.