The Euro's decline against the Dollar is not yet over according to new research, however the Eurozone's single currency can nevertheless still stage a recovery into year end according to one leading analyst we follow.

Analysis from UniCredit - the Milan based international financial services provider - reveals the low in the Euro-to-Dollar exchange rate's early-2021 decline is yet to be completed as markets readjust for stronger-than-expected U.S. economic performance, but a recovery back above 1.20 is still possible before the year is out.

"The US fiscal plan launched by the Biden administration has raised expectations that the US economy may reach pre-COVID-19 levels much faster than the rest of the world amid increasing risks of overheating," says Roberto Mialich, FX Strategist at UniCredit.

The U.S. economy has outperformed its peers thanks to a combination of a rapid vaccine rollout and a strong fiscal boost to the economy provided by the Biden administration.

This momentum is likely to remain entrenched following confirmation by the administration on Tuesday that by April 19 all U.S. adults would be invited to step forward for their vaccine.

These developments concerning the ending of the pandemic in the U.S. and a $1.9TRN stimulus package are being reflected in economic activity; last week saw the U.S. report a 916k jump in March payrolls and the improved economic sentiment was echoed in a strong lifts in the ISM and Conference Board surveys.

The strong data saw foreign exchange analysts at Westpac say their G10 FX Model had gone "all-in on the USD".

The Australia-based international financial services provider said their model is now overwhelmingly 'long' on the U.S. Dollar while it continues to shy away from low yielders (CHF and JPY) and vaccine laggards (EUR). 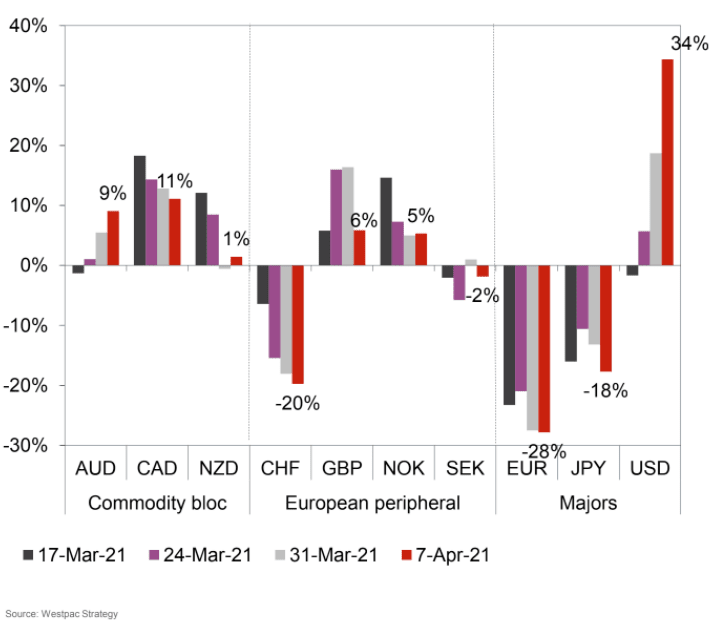 "While the focus is mostly on the US, where overwhelming fiscal support, reopening and a strong vaccine drive have boosted rebound hopes, growth and yield are having their say across the G10 as a group. Two distinct groups have formed: rebound leaders AUD, NZD, CAD, GBP, NOK and USD, and the “also rans”, made up of JPY, EUR, CHF and SEK," says Richard Franulovich, a foreign exchange strategist with Westpac.

The Dollar defied investors and analysts alike by gaining in the first quarter of 2021 and upended a solid consensus that 2021 would be a year of decline for the currency as the world recovered from the covid pandemic in tandem.

Polling of the analyst community showed an overwhelming preference for Dollar decline at the start of 2021 while positioning data showed speculators to be overwhelmingly betting their money against the Dollar.

However expectations have been upended by a disparity in the rollout of vaccines across the world, while a third wave of infections in Europe has been particularly detrimental to sentiment towards the Euro.

The Euro-to-Dollar exchange rate has fallen as a trend of "U.S. exceptionalism" gripped investor decision making, with a five-month low of 1.1704 being recorded on March 31 at 1.1704.

"Everything seems to be moving in the USD’s favour right now, and this is indicative of morem USD strength in the short term," says Mialich.

UniCredit says interest-rate differentials are favourable of the Dollar, very strong U.S. data are in the pipeline and COVID-19 developments have provided further tailwinds.

"However, the bar for more-genuine USD strength has risen to a very high level, and for various reasons," adds Mialich, citing the following observations:

1) Investors are now well aware of the massive U.S. fiscal plan and its projected impact on the U.S. economy. "New data releases on the US economy will probably offer diminishing support to the USD". 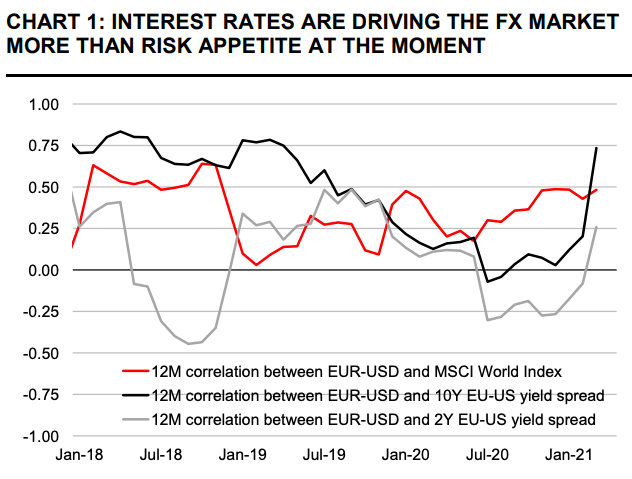 2) "a weird situation" is noted in which EU-US real differentials remain in the USD’s favor at the long end, while they are still in the EUR’s favour at the short end.

3) The Fed is said to be in no rush to raise interest rates, an expectation that could ensure U.S. yields are kept in check, thereby easing upside pressure on the Dollar.

The Dollar's recovery in the first quarter of 2021 has meant UniCredit have been forced to adjust their forecast profile for Euro-Dollar for the entire forecast horizon.

"EUR/USD downside potential has probably not been exhausted yet and a further correction, say down to EUR-USD 1.16/1.15," says Mialich.

However, UniCredit maintain a view that the exchange rate will still ultimately head higher supported by rising real yield differentials and an improving eurozone economy.

The Eurozone is expected to see progress made in its vaccination campaigns over coming weeks and months and UniCredit are forecasting a return to EUR/USD 1.18 by the third quarter of 2021.

Further stabilisation is envisaged around 1.22 by the fourth quarter.