The Dollar can continue to advance against the Euro and British Pound say foreign exchange analysts at Bank of America in a research briefing to clients, noting that a period of U.S. economic outperformance and linked Dollar "exceptionalism" is not going to evaporate in the foreseeable future.

The investment bank says they have been expecting general U.S. exceptionalism for some months now and this is expectation is now borne out in current market expectations for robust near-term U.S. economic growth.

Bank of America economists have recently revised upward revisions for U.S. interest rates as a result of these expectations.

"The US dollar appreciated at the beginning of March to the highest level since late-November, moving in close lockstep with the upward shift in US rates. Despite lack of follow-through as yet, we continue to expect a trend of USD appreciation this year," says John Shin, FX Strategist at Bank of America.

The Dollar defied investors and analysts alike by gaining in the first quarter of 2021 and upended a solid consensus that 2021 would be a year of decline for the currency.

Polling of the analyst community showed an overwhelming preference for Dollar decline at the start of 2021 while positioning data showed speculators to be overwhelmingly betting their money against the Dollar.

A look at relative performance in the G10 space shows that the Dollar has advanced against all its peers, apart from the Canadian Dollar and Pound, with the biggest gains coming against the low-yielding Yen and Franc. 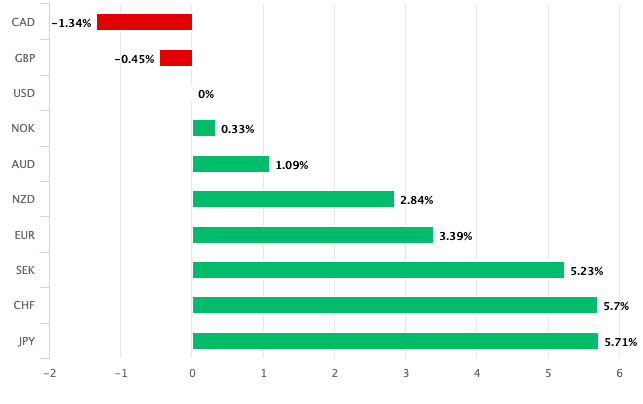 Bank of America currency strategists and economists expect a strong decoupling of the U.S. from the Eurozone economy and think the U.S. economy is likely to outperform by a wide margin in 2021.

Driving the outperformance is the superior vaccine rollout in the U.S. which is accompanied by a "particularly aggressive fiscal stimulus".

Economists expects 6.5% GDP growth and higher than anywhere in G6 and much of the Emerging Market space.

"As 1Q comes to an end, FX markets are reflecting our expectations for moderate EUR-USD downside and general US macro outperformance," says Shin.

Bank of America forecast Eurozone GDP to be 4.3% below pre-COVID GDP this year, to recover to the pre-COVID level only in 2023, and to remain well below the pre-COVID trend in the years ahead, by 5.3% next year.

"The risk is for an even stronger US decoupling than we expect," says Shin. "Against a backdrop of strong relative growth and rising interest rate differentials, we expect supportive capital flows into USD."

Bank of America forecast the Euro-to-Dollar exchange rate to trade at 1.18 by the end of June but fall to 1.15 by year-end.

The Pound-to-Dollar exchange rate is forecast to fall back to 1.35 by the end of June and 1.31 by year-end.