Europe's single currency has been recuperating this last month following another earlier airing of European Central Bank (ECB) concerns about the impact that a 10% EUR/USD rally during the year to January would have on inflation and the bank's ability to meet its "close to, but below 2%" target.

But on Thursday the Euro rose above month-long technical resistance point around 1.2190, enabling it to then rally hard back above the 1.22 handle for the first time since early January and before ECB President Christine Lagarde said the bank is "extremely attentive" to EUR/USD.

It may not be coincidence that Euro-Dollar rallied on Thursday alongside German and other government bond yields, which were also noted during the morning session by ECB chief economist Philip Lane as another source of concern. He was the first to complain in September 2020 about EUR/USD itself.

Technically, the Euro's break higher opens the door for a return to its January 6th high at 1.2349, ahead of further gains, but it's not just the signals coming off the charts indicating the Euro-Dollar rate might soon be goer again. Recent price action Pound Sterling is also supportive of that idea too.

Euro-Dollar was trading around the 1.2150 level on January 13 when Lagarde last referenced concerns about the exchange rate and since that time the Pound-to-Euro rate has risen by 4.3% from around 1.12 to 1.1648 at its peak in the early hours of Wednesday morning, amid a slide in EUR/GBP.

"There were no real headlines to trigger this move, though we have seen constructive flow," says Rui Ding, a content analyst at Citi FX Wire. "[Angus Yard] points out that the volume of questions he's getting regarding the EURUSD move and how much further this has to go indicates this isn't widely owned. Speaking to our eTrading desk, EURUSD trading volumes were 70% above the 30 day average during the London morning session." 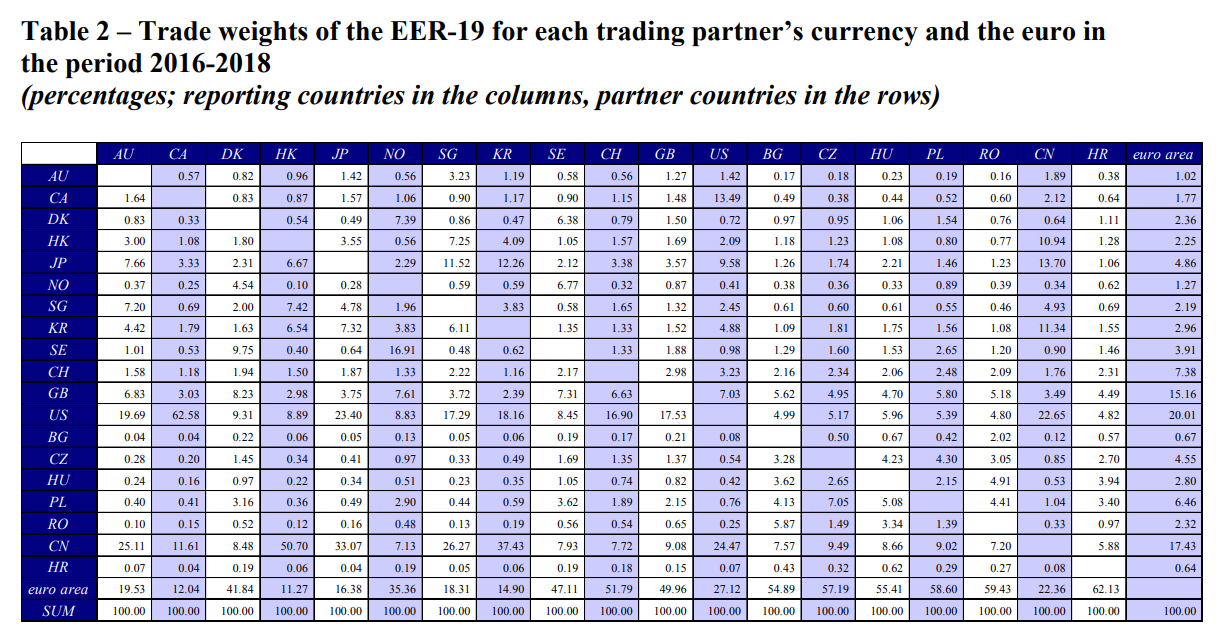 Sterling's decline on Thursday reflects strength in Euro-Dollar made possible by the British currency's earlier rise, which was worth in total and terms of the overall trade-weighted (TWI) Euro exchange rate, some 0.64%.

That is to say that Sterling's rally had a -0.64% impact on the TWI, the earlier level of which was a concern for the ECB.

Rallying exchange rates cheapen imports and when they rise as fast as EUR/USD does during bouts of market excitement over the Eurozone's prospects, such price action can lead to reduced inflation, which would be problematic for any inflation-targeting central bank but especially the ECB.

The ECB has long struggled and more than most to meet its inflation target, which is why as much as anything else that it was first to complain about the impact of last year's Dollar depreciation on its outlook for inflation. 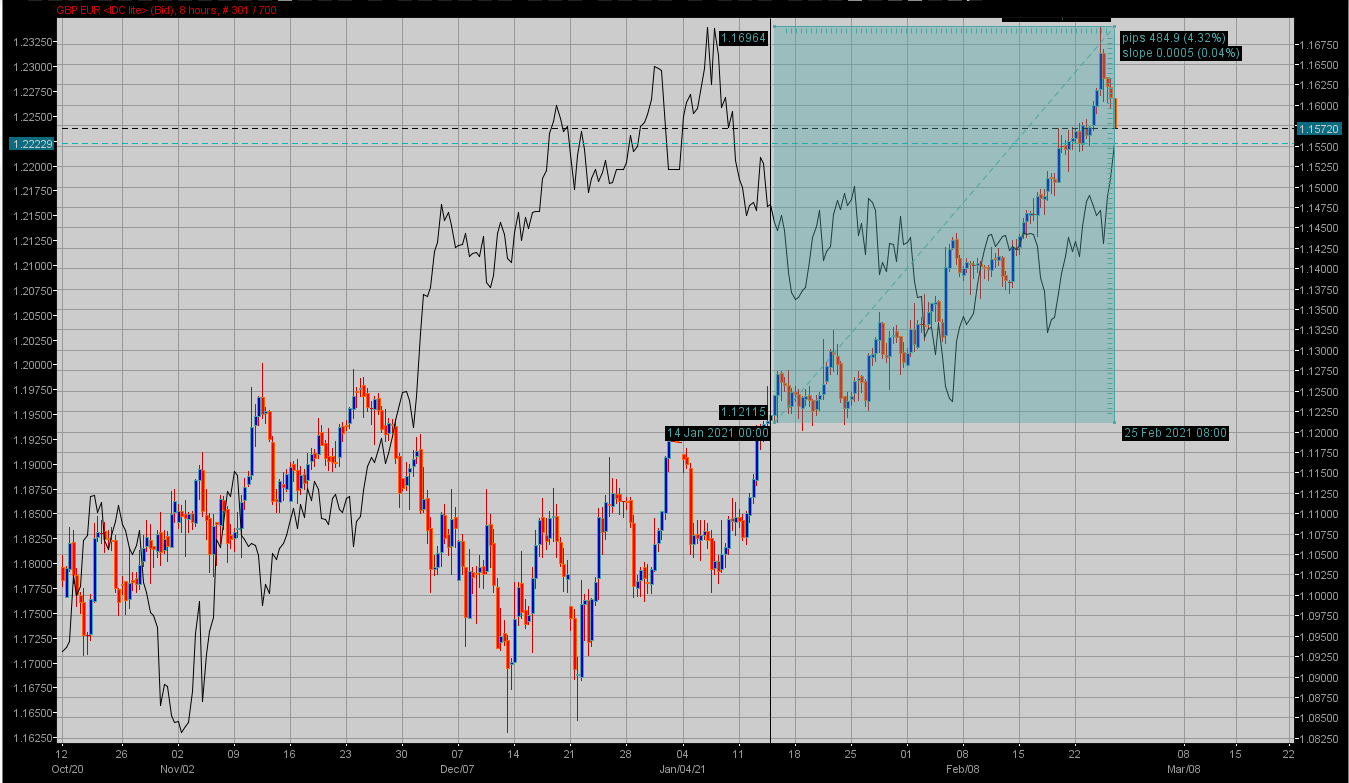 To the extent that this was the case, the TWI's fall was worth 1.2% in terms of upside from 1.2150 for the Euro-to-Dollar rate with all other things being equal. That in turn points EUR/USD toward 1.2368 for the time being, however not all other things have remained equal and notably other things located elsewhere in the Euro TWI complex.

"EURCHF has improved strongly over the last few days, testing above the crucial medium-term range high at 1.0915/16," says David Sneddon, head of technical analysis at Credit Suisse, referring to an exchange rate that accounts for around 7.38% of the trade-weighted Euro. "EURGBP momentum is slowing ahead of our core objective of the “neckline” to the late 2019/early 2020 base and long-term uptrend from late 2015 at .8609/07 [GBP/EUR: 1.1615], which we look to hold for now for a recovery/consolidation." 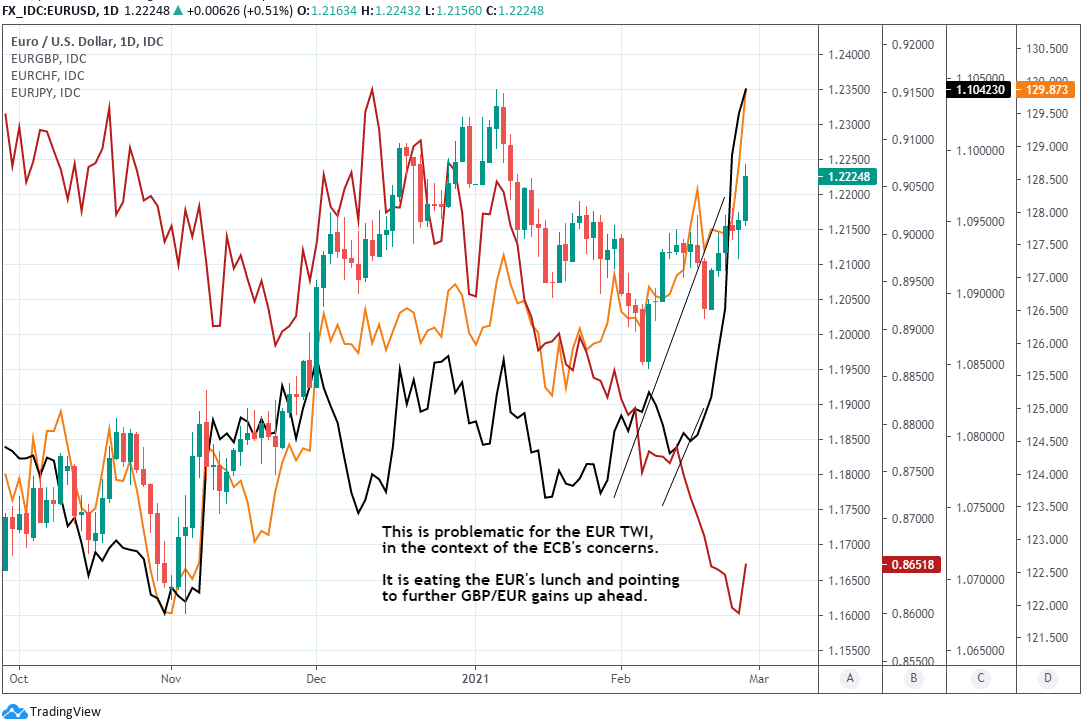 USD/CHF and USD/JPY are rising and in the process as well as when combined with the move in EUR/USD, are lifting other TWI-important exchange rates like EUR/CHF and EUR/JPY - which together account for around 12% of the TWI. This is eating into the headroom created by Sterling in its recent rally.

To the extent that the Pound's barnstorming performance is making nascent gains in Euro-Dollar possible - in the context of the ECB's concerns - depreciations of the Swiss Franc and Japanese Yen could also be likely to mean that Sterling's steamrolling 2021 recovery is not yet over.

The British currency could have much further to run this year and not least of all because it's Brexit-inspired undervaluation makes the Pound almost the only major component of the Eurozone's trade-weighted exchange rate complex that actually has scope to appreciate meaningfully from its current levels.

The exact driver of Sterling's 2021 rally is a matter of debate in the market. For example, one research note published on Thursday carried the headline "GBP: a one-trick pony on sale?"

Pound Sterling Live and others have what could be an underappreciated view on the rally's cause, which would have implications for both the Pound and the Euro up ahead.

These could see EUR/USD at 1.27 before long, although not without a further confounding of a once-comparatively pessimistic market consensus by Sterling, a 2021 outperformer of the currency market until just this Thursday. 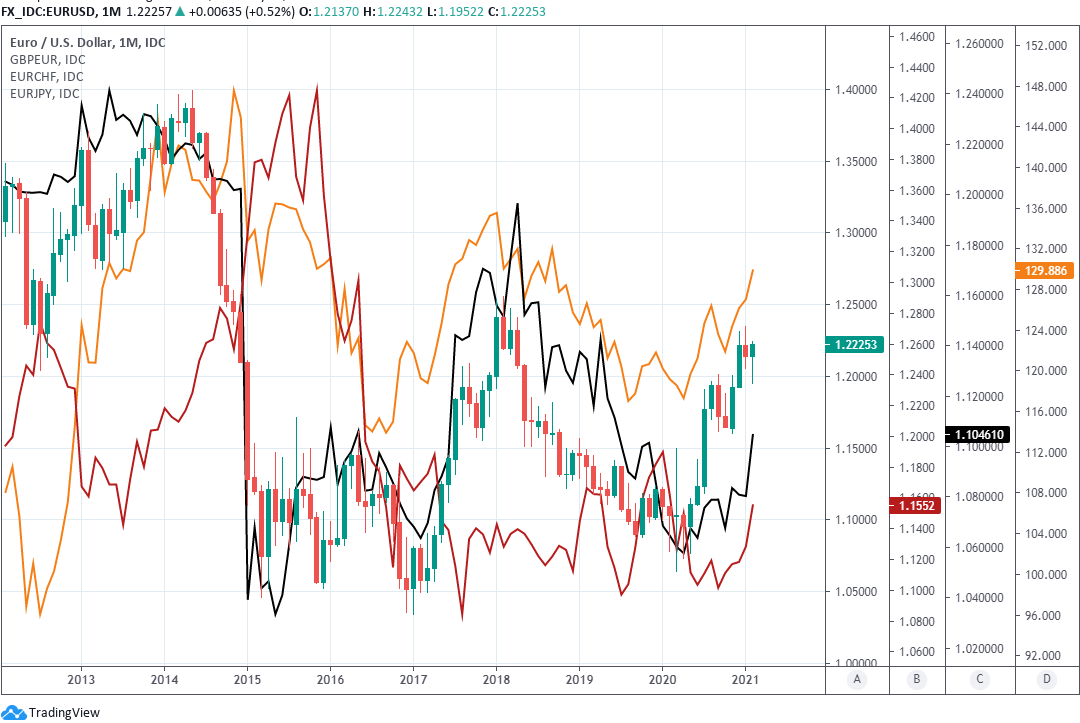 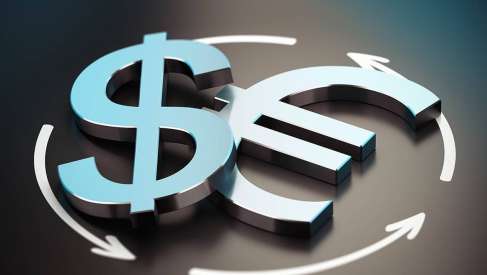