Studies of the charts are indicating that a dip below the 1.20 level could be likely for Europe's single currency over the coming days after waning momentum conspired with a break higher in American bond yields and prolonged coronavirus-induced shutdowns on the continent to stall the Euro-to-Dollar exchange rate last week.

The Euro twice tested 1.2350 last week, its highest since the first-quarter of 2018, before a sell-off in the American bond market provided a sharp lift to U.S. yields that troubled stock and commodity markets, which the single currency is positively correlated with.

But even as the Euro probed 1.2350 last Wednesday, measures of momentum were declining on the daily charts and warning that a short-term trend change toward the downside could be afoot. However, subsequent declines into the weekend have since made a mark on the weekly charts too.

"The US Dollar Index is upside corrective, we are near term looking for a correction to the downtrend at 91.72," say Karen Jones and Axel Rudolph, technical analysts at Commerzbank. "Above here should see further strength to the 200 day ma at 94.76 but that is about it on the topside."

Divergence between a relative-strength-index (RSI) and market price can often be a harbinger of a technical reversal and both the Euro as well as U.S. Dollar Index have exactly this on both daily and weekly charts.

Europe's single currency has a 57% weighting in the ICE Dollar Index so when it turns lower, the barometer of the U.S. currency tends to turn higher.

"With the USD rebounding from major support and our next core objective, we look for further corrective weakness yet," says David Sneddon, head of technical analysis at Credit Suisse. "We continue to look for a rebound from price support at 1.2129/22 as flagged, but our bias is seen for a break in due course and a deeper setback to 1.2065/59 – the December low and 38.2% retracement of the November/January rally – where we then look for an attempt to find a floor. Failure to do so can expose the 55 - day average and September high at 1.2020/11, but with this expected to prove a better floor." 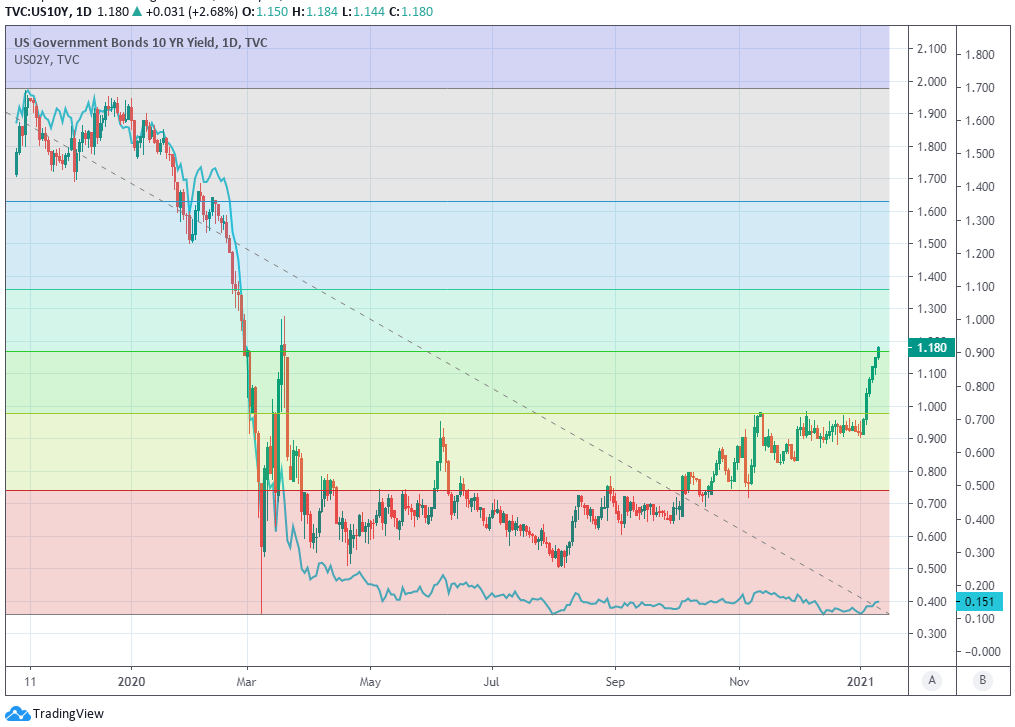 Chancellor Angela Merkel said Tuesday that Germany's lockdown is likely to remain in place until April despite the current measures being set to expire in January, indicating that an extension is now all but certain. This and the ongoing rally in U.S. bond yields could have fomented the Euro's sluggishness on Tuesday, which saw it cede ground to most major counterparts with the exception of the Dollar, Japanese Yen and Swiss Franc.

"G10 currencies have been primarily and commonly driven by a single force: risk appetite. While some may consider this simplistic or boring, it is also inescapably true. This largely remains the case. But with US 10y yields having moved sharply higher so far this year, we must ask whether FX will start to respond more to other drivers soon," says Dominic Bunning, head of European FX research at HSBC. "The sharp run up in US front end yields from 2016, as the Fed moved from tapering to hiking, helped to make rates a much more prominent force for FX. For rates to become a persistently more powerful driver of FX again, we would need some combination of even higher US yields and more movement in the front end of the rates curves."

But Federal Reserve policymakers have also recently suggested the bank could begin winding down its quantitative easing programme (QE) before the year is out, which is sooner than markets had anticipated. Lesser central bank demand for government bonds is a recipe for higher yields as well as potentially a source of support for the Dollar and a headwind for the Euro.

For the time being at least, yields may only be able to weigh on the Euro through any impact they have on stock markets, which it's positively correlated with. However, any indication there's anything like a majority coming together among U.S. central bankers in favour of a 2021 reduction to its bond purchases would be a different story.

The latter could be enough to encourage the uplift in short-term yields like the 2-year, which HSBC says is necessary for the bond market to become a more prominent influence on the Euro and other currencies. Currently, the Fed's QE programme disproportionately squashes yields of exactly that kind of maturity while having a lesser effect further along the yield curve or maturity spectrum.