The Euro-to-Dollar exchange rate is in touching distance of the psychologically significant 1.20 level at the start of the new week, at 1.1967.

This is the best exchange rate for Dollar buyers since September 01, when the pair shot above 1.20 momentarily before retreating back to lower levels.

The Euro closed its strongest week in four on Friday after overcoming important technical obstacles on the charts but but faces further nearby impediments to upside and a deluge of economic data as well as central bank speeches that could slow the single currency's ascent this week.

Europe's unified unit rose for three out of five days last week and crucially, climbed above the 1.1925 level that formed the last remaining obstacle to a retest of September's high above 1.20 , a return to which could be seen over the coming days.

Europe's single currency is in the midst of a "bullish consolidation" on the charts, with directional movement studies and the Elliot Wave indicator all pointing to continued upside in the short-term at least, according to Commerzbank technical analysis. Rudolph and colleagues bought the Euro at 1.1780 and are targeting a move up to 1.2010 where they intend to partially exit the position. 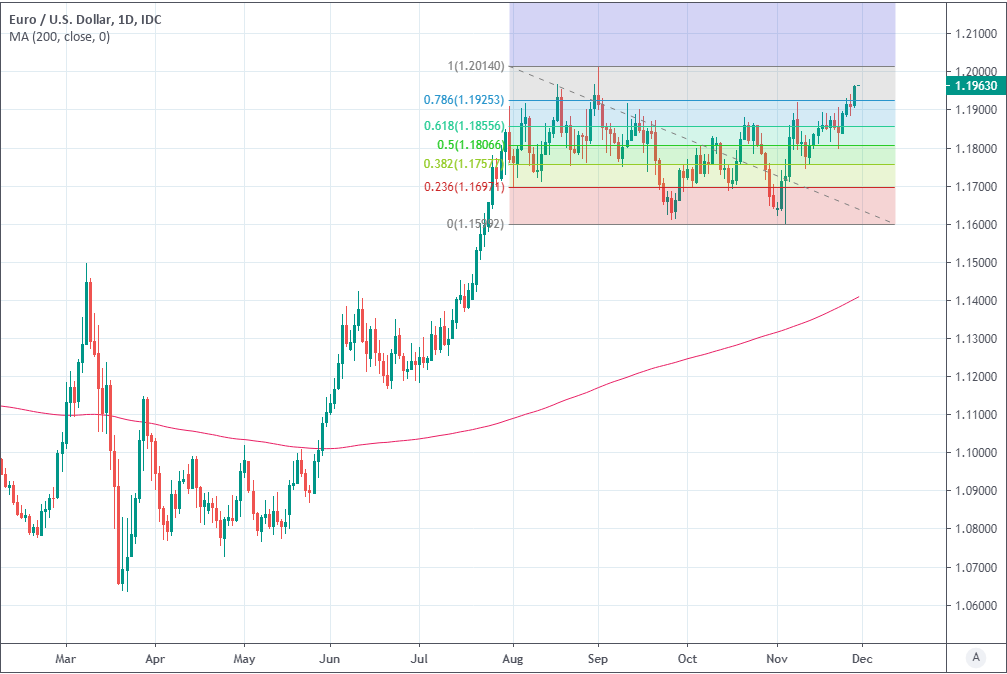 Above: Euro-to-Dollar rate at daily intervals with Fibonacci retracements of September correction, 200-day average in pink.

Once above the 1.2014 level the Euro would then have little by way of technical obstacle keeping it from a significant long-term average located at 1.2622, although European Central Bank (ECB) President Christine Lagarde may have something to say about this in either of her Monday and Tuesday speeches.

ECB officials have repeatedly tried to discourage the Euro from climbing above 1.20 in recent months and Lagarde is set to speak twice in the first half of the week. She will address the Policy Centre at 10:00 am on Monday and the Atlantic Forum on Tuesday at 17:00 London time.

"We sense a forming consensus that 1.20 will keep holding, which is a signal of vulnerability to us," says Martin Enlund, chief FX strategist at Nordea Markets. "If the 2017 playbook is allowed to unfold itself again, then EUR/USD will break 1.20 shortly in to 2021. Maybe the pamphlet of perma-EUR-loving investment bank trade of the year publications, will prove to be the final trigger of such a move? Or maybe we just need the two dovish meetings from the ECB and the Fed out of the way first?"

ECB policymakers fear the effect that a rising Euro will have on their ability to deliver a ever-elusive inflation target of "close to but below 2%," given that rising exchange rates make imported goods cheaper to buy while also crimping export competitiveness.

Inflation data for November will either further vindicate such concerns on Tuesday at 10:00 am, or question the merit of them. Consensus looks for the consumer price index to rise from -0.3% to -0.2% while leaving the core inflation rate unchanged at an annualised 0.2%.

Any disappointment of those expectations could bolster expectations for a significant easing of Eurozone monetary policy by the ECB in December and test investors nerves when it comes to remaining invested in a rising Euro. 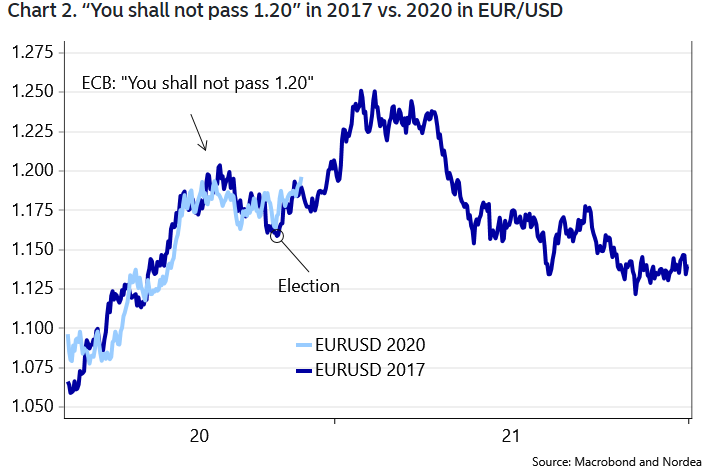 "The simmering threat of a veto of the EU Recovery Fund by either Poland or Hungary has yet to be taken seriously by FX markets (a deal is expected) and the EUR will also take note of any progress on Brexit. In the background, any good Chinese November PMI numbers or any OPEC+ outcome which does not hurt crude oil too badly would probably be greeted well by the trade-sensitive EUR," says Petr Krapata, chief EMEA strategist for currencies and bonds at ING.

Also of interest to Euro-to-Dollar traders in the week ahead will be any signs of compromise in Europe's row over the EU's recovery fund and next seven-year budget after Poland and Hungary said earlier this month they intend to veto it due to disagreement with provisions relating to the EU's rule of law.

If deadlock between the two members and the remainder of the EU is not broken then the implementation of Europe's widely cheered coronavirus recovery fund would be delayed for months and Brussels would face having its spending on various programmes made more difficult from the New Year.

EU leaders were expected to give a final sign-off to the budget and recovery fund at December's European Council meeting, which ends on Thursday 11.

ECB currency concerns and developments around the budget could both marr the backdrop for the Euro this week, but its investor risk appetite and the resulting trajectory of global stock markets that has mattered most for the single currency in recent months.

This could mean the creeping spread of new restrictions on activity in the U.S. and investors' reaction to it is the most important factor for the single currency this week, alongside responses to key economic figures that are also in the diary for the coming days.