Europe's single currency was back above 1.19 against the Dollar amid an upbeat mood among investors, which saw stock markets climb and the greenback relinquish ground only just recovered from other major currencies in the prior session.

"EURUSD is grinding higher again today as risk-on continues to build momentum across all markets," says Peter Garnry, head of equity strategy at Saxo Bank. "If the high from yesterday at 1.1941 can be taken out then the 1.2000 level is psychologically in sight for traders."

The Euro was bolstered early on by an upward revision to France's third-quarter GDP estimate but faces a series of hurdles that could place a question mark over the sustainability of any highs in the short-term, not least an ongoing row over new conditions for accessing EU funding that Brussels and some members are attempting to push through with the bloc's next seven-year budget.

"The EU could push ahead via a qualified majority of its members for at least the EUR750bn coronavirus fund, but that would leave the EU operating under an emergency monthly budget rather than something more expansive going forwards," says Michael Every, a global strategist at Rabobank.

Officials and leaders had expressed optimism this week that a solution could be found by the December European Council meeting, enabling the budget to come into effect smoothly on January 01, although the stand-off with Poland and Hungary escalated on Thursday and left those sentiments looking misplaced. 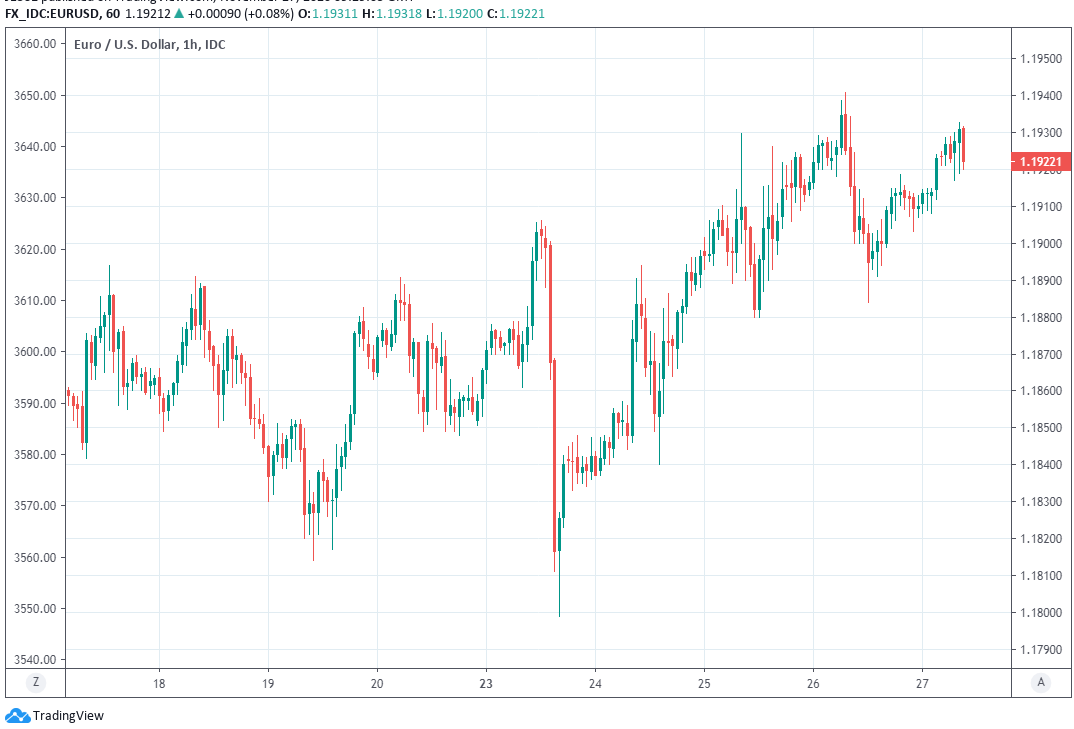 "Hungary will not accept a proposal that would be unacceptable to Poland," said Hungarian Prime Minister Viktor Orbán in a joint statement Polish Prime Minister Mateusz Morawiecki. "The veto is a right guaranteed to us by the Treaty on European Union. It can be used if a country feels that its vital, fundamental, essential interests would be harmed by a decision. It is not only my opportunity, but also my patriotic duty to prevent the adoption of a proposal that violates the interests of Hungarians."

Poland's Mateusz Morawiecki accused Brussels of trying to force "an arbitrary, politically motivated mechanism on member states, which could even lead to the disintegration of the union." He argued that a new legislation "cannot circumvent a fundamental right...We have a veto right enshrined in the basic treaty."

The two members have agreed to work in tandem and say neither will accept a proposal that cannot be agreed by the other, leaving the two sides in a divide over the EU's "rule of law" deadlocked and the Brussels on course for something like a partial government shutdown in the New Year.

"The ECB does not need a stronger EUR from here but for EU leaders to deliver the EU Recovery Fund," says Philip Wee, a strategist at DBS Group. "Despite the extraordinary policy responses overall monetary conditions in Europe have not eased...its price stability mandate would require the ECB to address the tightened financial conditions from real interest rates (the tightest in 12 years) via negative inflation and a stronger real euro (tightest since January 2010)." 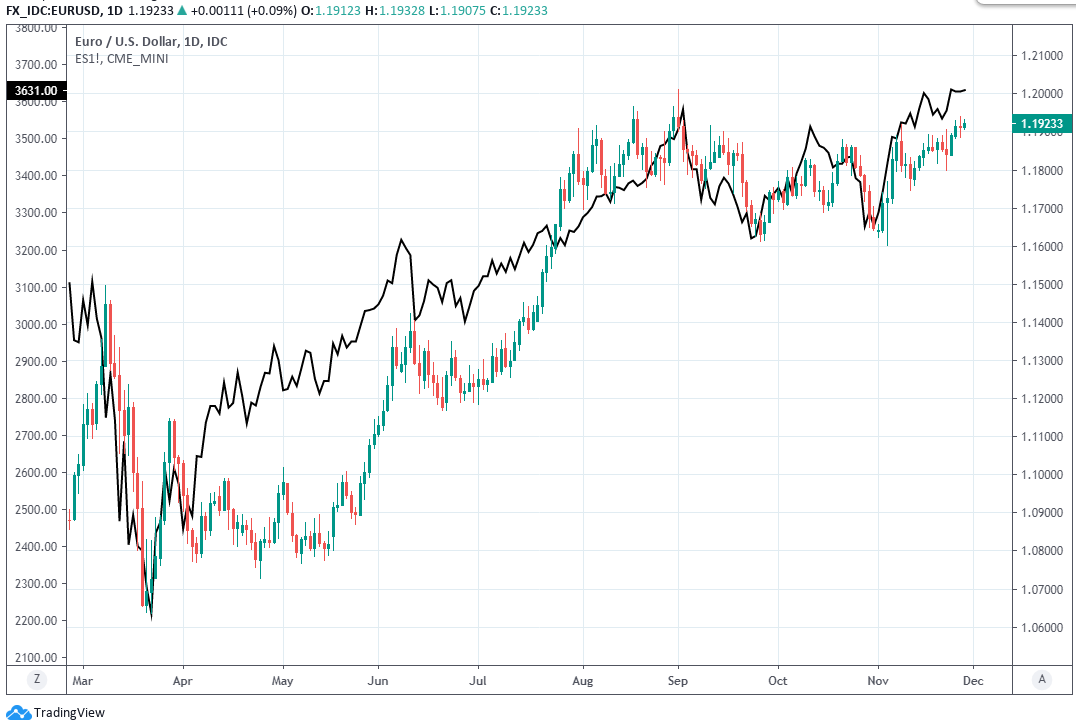 The stand-off risks disrupting budgets so will place more pressure on the ECB to act in December when it was already expected to add further to its €750 billion Pandemic Emergency Purchase Programme (PEPP), after saying in October that a "recalibration" of all instruments was necessary.

The bank also warned it would "carefully assess the incoming information, including the dynamics of the pandemic and developments in the euro exchange rate," ahead of the December 10 decision.

"The threat of interest rate cuts may remain active for the time being," says Ulrich Leuchtmann, head of FX research at Commerzbank, who sees the Euro taking until March to reach 1.21. "The ECB needs this threat to be able to limit any possible excessively rapid appreciation of the EUR. We therefore regard a very significant EUR appreciation as hardly sustainable. If it did come, it would be quickly killed off by an ECB interest rate cut."

With Europe's economy also now encumbered by fresh coronavirus related restrictions, which are set to endure further into the winter in some parts, the ECB may now need to go further than before. Political quarrel and a second wave of coronavirus measures have pressured the ECB and constrained the Euro even as progress in the race for a coronavirus vaccine fueled investor risk appetiteand enabled stock markets as well as other currencies to reach new highs against the Dollar this month.

"The prospect of monetary easing on 10th December may well be playing a role in limiting EUR upside. We should not be fixated on EUR/USD alone. The rise from the 1.1600 level is very much USD-related. The ECB EUR EER covering 41 trading partners has actually declined in November," says Lee Hardman, a currency analyst at MUFG. "Still, the ECB will remain focused on EUR upside risks given the potential for follow-through once 1.2000 is breached."