The Euro-to-Dollar rate led a fresh onslaught against the greenback Tuesday that took it across an important threshold on the charts, potentially opening the door to further gains ahead, but the trade-weighted Euro is rising again along with Eurozone economic headwinds that may ultimately undermine the rally.

Europe’s single currency lept back above 1.18 on Tuesday, leaving behind in its wake the 55-day moving-average located around 1.1795 and in the process, creating scope for a potential retest of September’s highs.

“The market remains capped below a cluster of resistances including the 55-day average and potential downtrend at 1.1789/95 and whilst below here, our bias stays directly lower,” says David Sneddon, head of technical analysis at Credit Suisse in a morning research note. “A closing break above the 55 -day average at 1.1795 would reassert the choppy range again and likely see a move back to 1.1833/39. Only above here would turn the risks back higher.”

Tuesday’s leap builds on a strong start to the week but could ultimately prove to be self-defeating if it invites further threats of action from the European Central Bank (ECB), which it may eventually do given renewed increases in the trade-weighted Euro and fresh coronavirus threat to the economic outlook.

ECB complaints helped turn both the Euro back from two-year peaks early last month, capping the trade-weighted Euro in the process.

"The EUR TWI is back above the ‘neckline’ to its small top, however whilst below 101.70 we stay biased towards for a two-to-four week correction," Sneddon says. 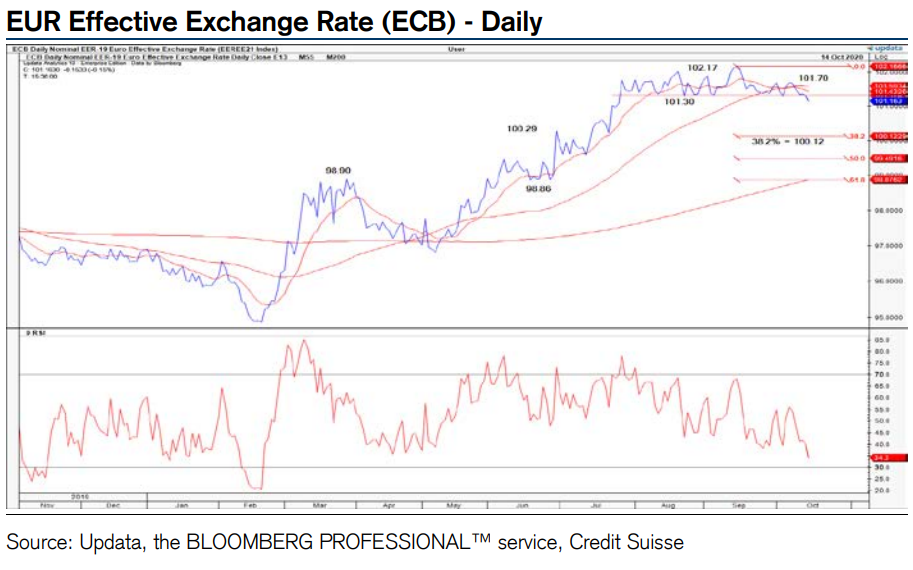 “We turned bullish the EUR on an outright basis back in June following the completion of a large “head & shoulders” base by the EUR Effective Exchange Rate, which was accompanied by a break of its medium-term downtrend from 2014. Whilst we still think this core long-term trend is up and further gains will eventually be seen, the immediate risk is now seen lower following the completion of a three-month top and we look for a counter-trend correction to emerge over the next two to four weeks” Sneddon writes. “The close below the 101.30 August low has resolved its three-month range lower as flagged and we look for this to clear the way for further broad-based weakness.”

ECB policymakers have warned repeatedly that they’ll be watching the Euro-to-Dollar rate closely because of the impact that fluctuations in it can have on the trade-weighted exchange rate. EUR/USD accounts for one fifth of the Eurozone TWI, which has also risen to multi-year highs this year but at a point when neither the Eurozone economy nor the ECB can afford it.

The stronger trade-weighted exchange rate has made imported goods cheaper to buy, which risks pushing the ECB’s inflation target of “below, but close to 2%” further from view while potentially tempering the recovery if currency strength leads export competitiveness to be crimped.

“Falling inflation expectations in the euro area are likely to keep the ECB in a dovish state of mind,” says Jordan Rochester, a strategist at Nomura in a recent note. “In our view, it's all about risk sentiment into and over the US election, with EUR/USD highly correlated with equity markets in the US of late. The market currently holds multi-decade highs in short USD positions. With rising COVID-19 cases, social distancing slowly being re-tightened and mobility data in decline, we see the risks skewed toward a turn lower in EUR/USD for the time being.” 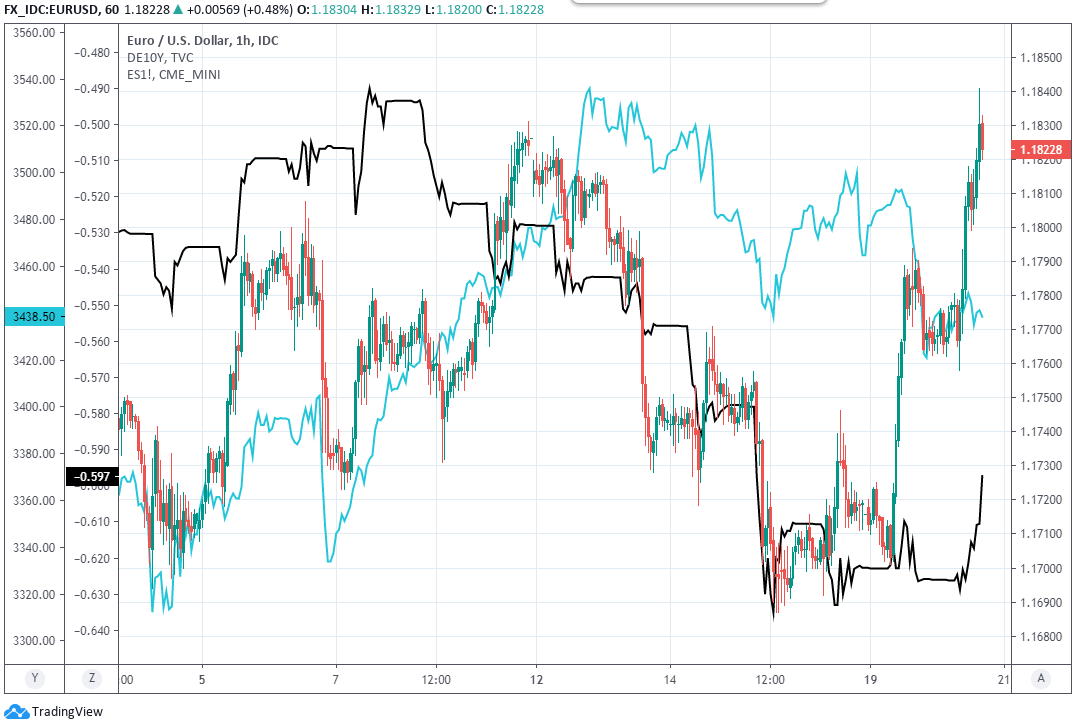 The Euro-Dollar rate is rising and Europe’s trade-weighted exchange rate climbing just as continental economies face having their recoveries scuppered in the final quarter by fresh coronavirus-related restrictions on activity.

European governments have mostly avoided a return to the all-out ‘lockdown’ seen back in the second quarter but nonetheless, increasingly cumbersome restrictions on social contact have placed the rebound in GDP growth at risk.

This is a risk to the Euro because market perceptions of a brighter continental growth outlook relative to that offered in the U.S. were a significant driver of the summer rally in the Euro-to-Dollar.

“The second wave of coronavirus has caused the recovery to stall and we forecast euro-zone GDP to stagnate for the next six months, with an outright recession a significant downside risk. We think Spain’s economy will probably contract in Q4, while Germany is very likely to remain the region’s strongest,” says Andrew Kenningham, chief Eurozone economist at Capital Economics. “Governments will provide more fiscal support than previously anticipated, but this will not prevent unemployment from increasing which in turn will weigh on consumption. With inflation stuck well below target, the ECB will make its targeted loans to banks more generous and expand its emergency asset purchase programme.” 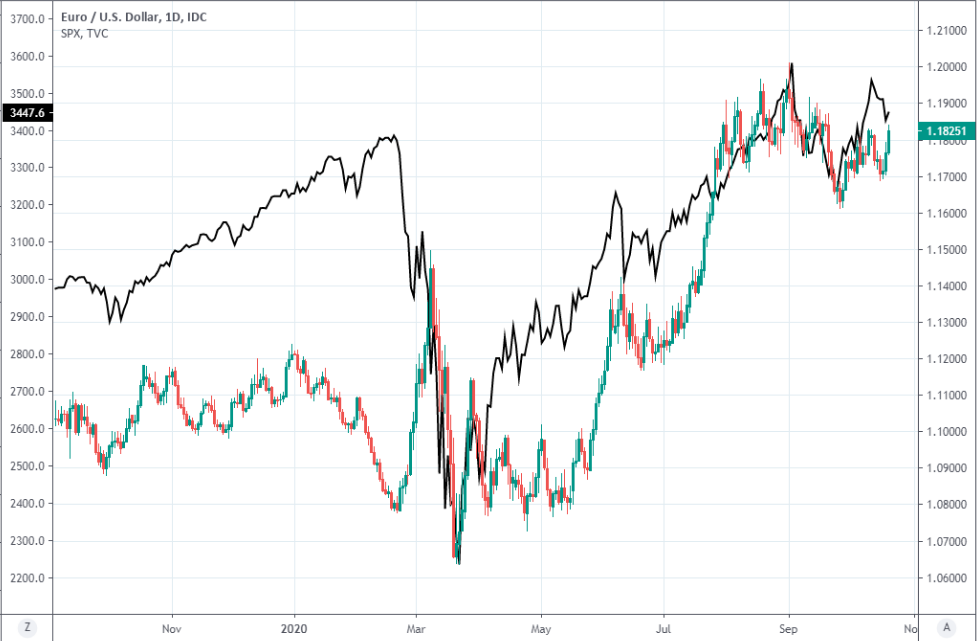 The danger now is that a souring growth outlook undermines appetite for the Euro where ECB concerns about currency strength don’t, and just as the U.S. election draws near, which could see investors rethinking wagers against the Dollar that Europe’s single currency has been a significant beneficiary of.

Investors have sold the Dollar in anticipation of a victory by opposition candidate Joe Biden whose regulatory and tax agendas risk slowing the economy, while his spending agenda promises ongoing large budget deficits and continued Federal Reserve (Fed) money creation to support such expenditure through quantitative easing. But Biden has seen his polling lead narrow in recent weeks with now just a fortnight to go until the November 03 ballot, potentially making the worst case scenario of an outcome that’s contested in court more likely, while risking a further correction higher for the Dollar.

“Demand was enormous, totaling over €230bn. From today’s auction, the EU plans to raise €17bn; the bulk (€10bn) from the sale of 10-year debt," says Mathias Van der Jeugt, head of research at KBC in Brussels.

Tuesday’s price action came amid a chequered performance for stock markets but widespread increases in government bond yields that are typically indicative of a robust appetite for risk among investors. But European currencies were clear outperformers, potentially as a result of strong demand for European Commission bonds issued as part of the coronavirus recovery budget.

Gains built alongside fresh hopes that a pre-election financial support package for households could yet be agreed in Washington, as well as amid further suggestions from pharmaceutical companies including Moderna that a coronavirus vaccine could be ready by year-end.