The Euro-to-Dollar rate has proven resilient amid safe-haven demand for the greenback after President Donald Trump contracted the coronavirus, but it could struggle this week if European Central Bank President Christine Lagarde speaks out against the Euro in any of her multiple speeches.

Europe’s single currency closed Friday with an intraday loss but one that was reduced after it President Trump said he has the coronavirus, a revelation that lifted the Dollar against most majors.

The Euro still ended the week with close to a one percent gain but had been unable to get sustainably past the 1.1750 level. It could be volatile over the coming days as investors digest updates on Trump's condition, which will be an important determinant of risk appetite.

“The news that President Donald Trump has tested positive for coronavirus has further boosted Joe Biden’s perceived odds of winning,” says Franziska Palmas at Capital Economics. “We might well see politics take the centre stage in the next few weeks, driving day-to-day moves in the S&P 500.”

Trump was transferred to hospital late on Friday where he's receiving Remdesivir, an experiemental drug developed by the U.S.-headquartered and NASDAQ-listed Gilead Sciences, and antibodies.

"The President was first diagnosed with COVID-19 on the evening of Thursday, October 01 and had received Regeron's antibody cocktail on Friday, October 2nd," Trump's physician said on Saturday, after earlier describing him as "doing very well...not requiring any supplemental oxygen...resting comfortably."

Wednesday's vice presidential debate is the main event for election-watchers but Trump's health might have more of an impact on the markets. 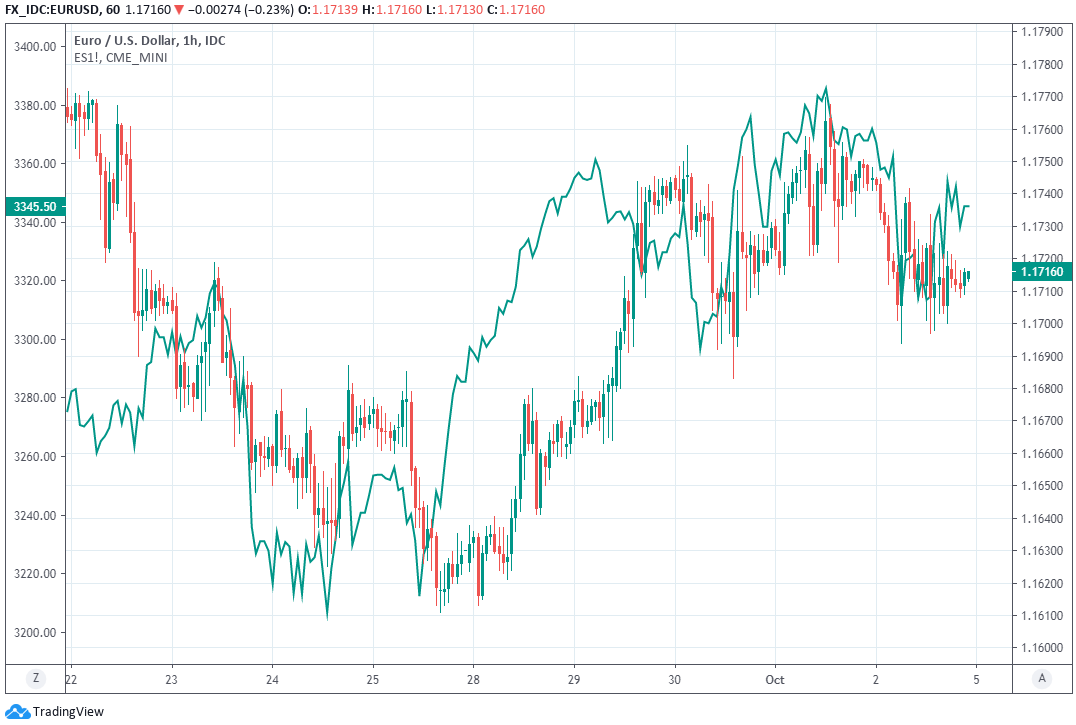 There's widespread agreement among analysts that a Democratic Party presidency would be a Dollar-negative outcome given Joe Biden's China-friendly stance, but his onerous agendas on taxes and regulation coupled with the Democrats' growing contingent of 'socialists' could hardly be welcomed by the stock markets. In other words, the above correlations might be susceptible to at least a period of interruption in a post-Trump world.

The Euro is one of the first in line to benefit if Trump is either unable to run for or otherwise secure re-election, which might explain why it pared earlier losses on Friday following his announcement.

Appetite for the Euro could be tested in the week ahead by a series of speeches from ECB President Christine Lagarde, who’s set to address multiple audiences on Tuesday and Wednesday.

“The question now turns to what the ECB does to counteract the impact of a stronger EUR,” says Bipan Rai, North American head of FX strategy at CIBC Capital Markets. “EUR/USD is still struggling to capture the 1.1750 level that marked prior support. Again, that’s indicative of the position rebalance theme playing out. Another test of the 1.1600 mark shouldn’t be ruled out.”

Lagarde’s speeches could garner more attention than usual this week after Friday brought with it inflation statistics that surprised on the downside for September, a month in which ECB policymakers warned repeatedly about the risks posed to the bank’s inflation outlook by this year’s strong gains in European exchange rates. 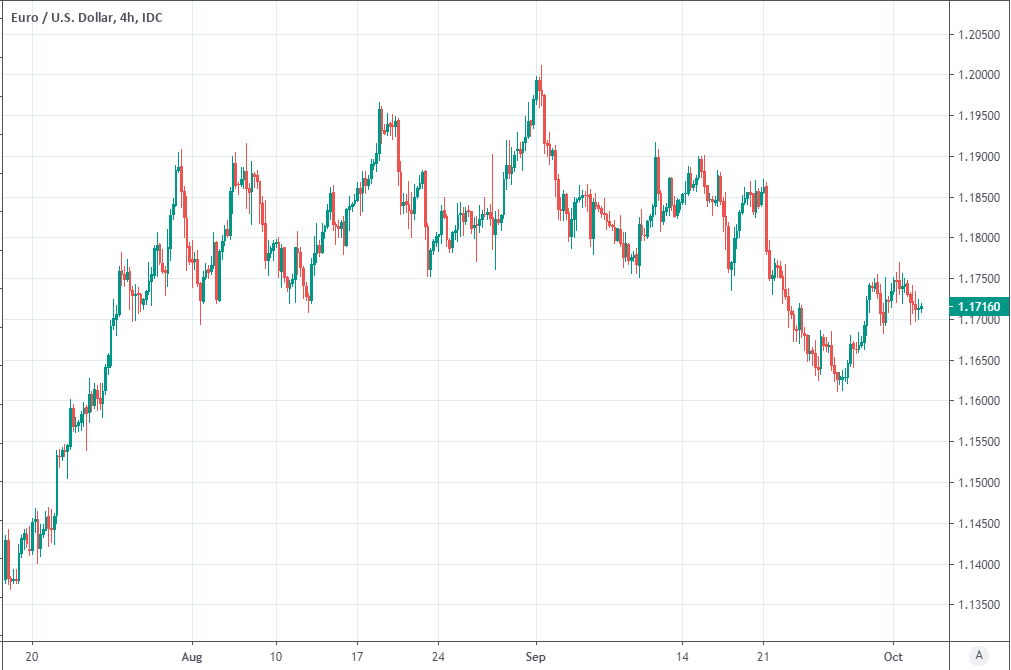 Inflation fell further below zero last month when it had been expected to rise, which could be troubling for the ECB given it struggled for years before the pandemic to meet its target of delivering price growth of “close to, but below 2%.” Currency strength reduces inflation by making imported goods cheaper.

“We look for the downtrend at 1.1794/98 to ideally cap the rebound,” says David Sneddon, head of technical analysis at Credit Suisse. “Support is seen at 1.1717 initially, then 1.1685, with a break below 1.1665/61 needed to reassert a bearish tone again...Above 1.1798 would see the top negated to suggest the correction is already over and broader uptrend resumed.

The Eurogroup of finance ministers will get the first opportunity to discuss and comment on the Euro Monday, before Lagarde addresses an online CEO summit hosted by the Wall Street Journal at 09:25 on Tuesday.

Lagarde will speak again at 14:00 Tuesday, this time participating in a panel discussion about the European Stability Mechanism, before going on to the Paris Europlace  International Financial Forum for 13:10 on Wednesday.

“While the market remains below the short term downtrend at 1.1780 a negative bias will remain entrenched. We should see renewed weakness towards 1.1523, the 38.2% retracement and then the March high at 1.1495,” says Karen Jones, head of technical analysis for currencies, commodities and bonds at Commerzbank. "There is an outside chance that losses could extend to the 200 day ma at 1.1251, but that is not our favoured scenario." 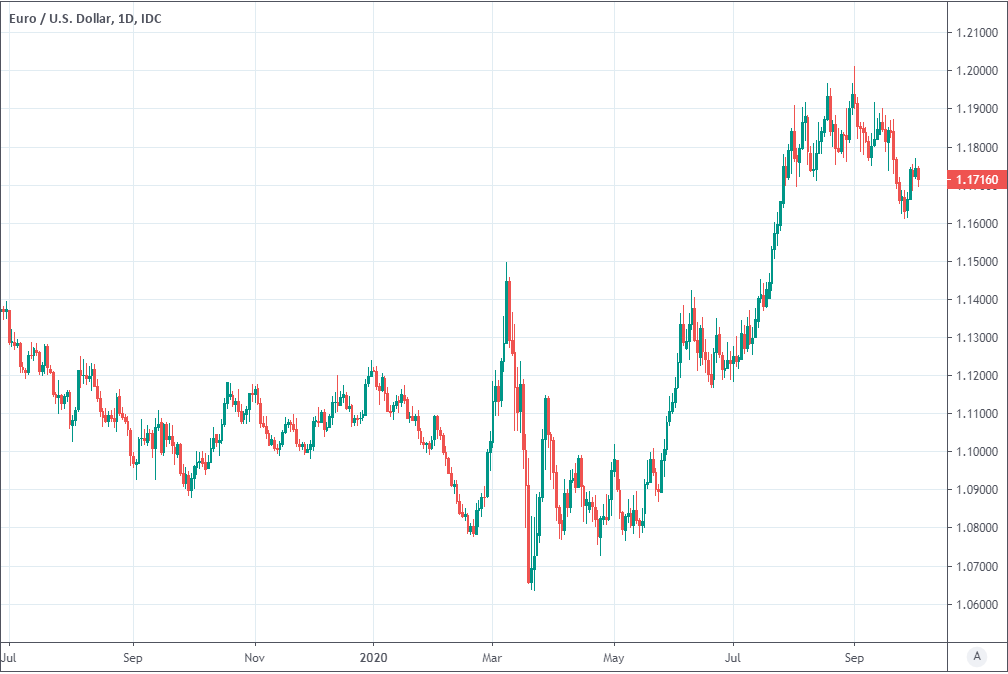 Lagarde already said last week that she and ECB rate setters will take exchange rate developments into account when assessing the inflation outlook as well as in determining the right level of additional stimulus required by the Eurozone economy, a tacit threat of an attempt to push it lower.

Investors will be listening closely for further detail on the ECB’s boundaries and of any action it might take to restrain the currency. They’ll also likely scrutinise Thursday’s account of the September policy meeting in which Lagarde first addressed the subject of Euro strength.

However, updates on President Trump’s health and developments in pre-election opinion polls may matter more for the Euro. It could be as much as 14 days before markets know the extent to which Trump and his re-election campaign will be impacted by the virus.

“We continue to look for broad US Dollar depreciation over the coming year. In the event that Democrats take both the White House and Senate—the “blue wave” scenario—and regulators approve a first vaccine this year, Dollar depreciation could be more front-loaded than we currently anticipate. In particular, our 12m targets for major crosses—e.g. 1.25 for EUR/USD and 6.50 for USD/CNY—could be reached closer to year-end,” says Isabella Rosenberg, a strategist at Goldman Sachs.

The Democratic Party was already tipped by pollsters to clinch the presidency but if the Republican campaign is undone by the virus and this leads to a higher probability of a ‘clean sweep’ the Dollar could come under renewed pressure. 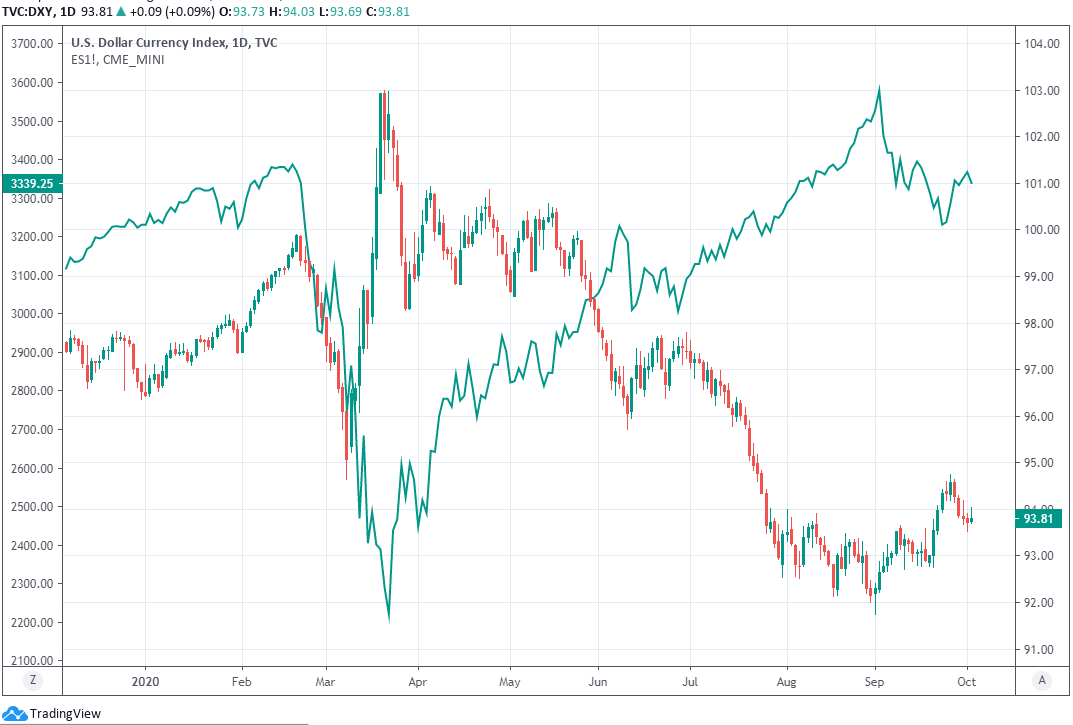