-EUR/USD swimming in deep water with ball and chains on each ankle.
-As ECB blows hot and cold on EUR strength and Brexit talks turn ugly.
-Market still remains bullish EUR/USD as the ceiling solidifies at 1.20. 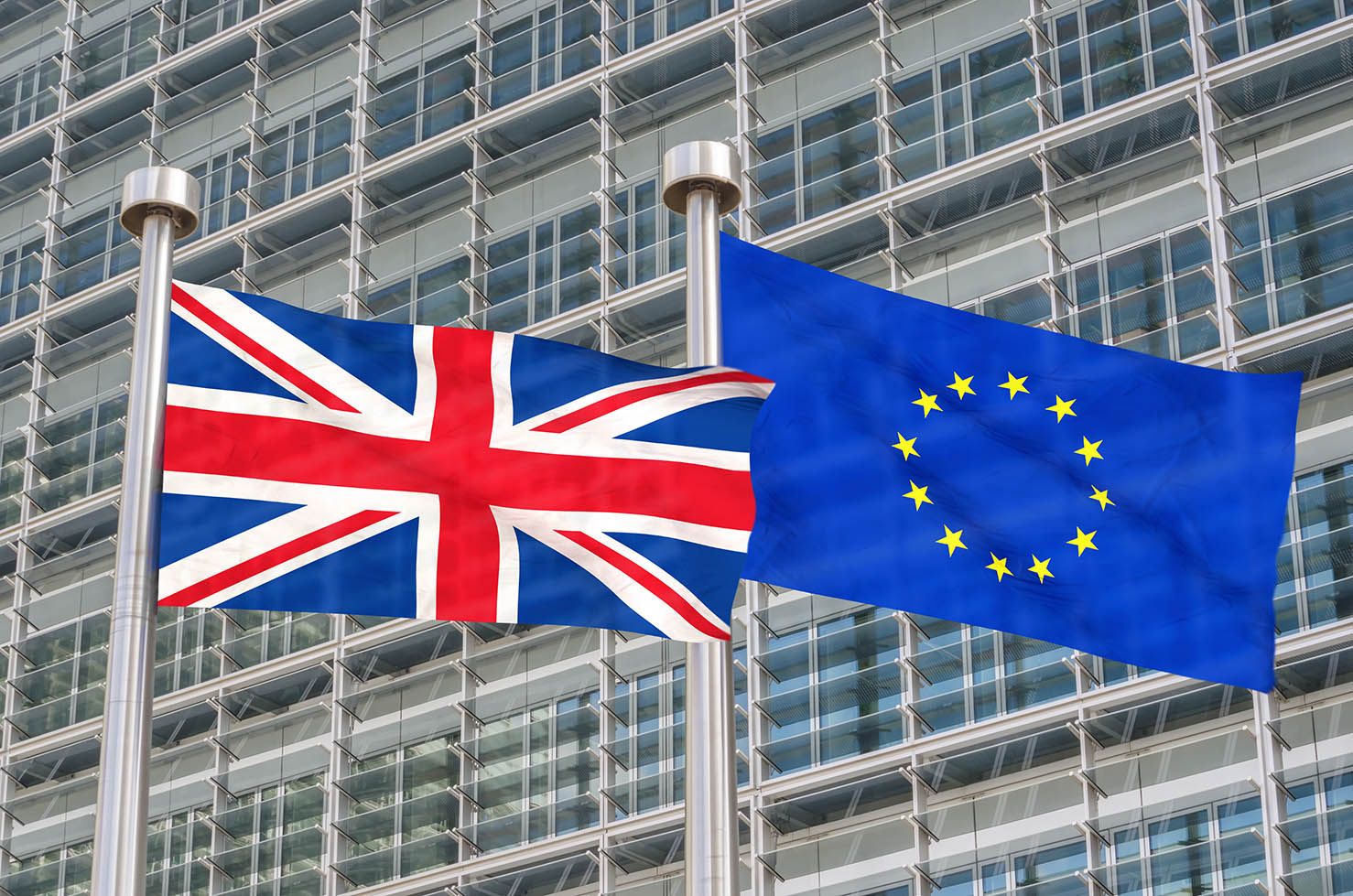 Europe’s single currency saw three solid days of recovery into the weekend but ended the week on Friday with less than a 0.1% gain for the period after Sterling suffered its steepest losses since March, which lifted the trade weighted Euro during a week dominated by ECB concerns about exchange rate strength.

But with Brexit back in the mix for investors and threatening further losses for Sterling, which is more than 15% of the trade-weighted Euro, the exchange rate that matters most to the ECB in the coming weeks without the Euro-to-Dollar rate having to do much of anything at all.

“EUR failed to hold on to initial gains post the ECB press conference – we believe for good reason. President Lagarde may have disappointed expectations with her FX comment but it should not mask the fact that the ECB is growing concerned and continued EUR gains could prompt monetary action in the future,” says Derek Halpenny, head of research, global markets EMEA and international securities at MUFG.

Dollar transactions account for a larger 20% while the Japanese Yen, which could also be likely to fall this week, accounts for almost five percent of the index. If Sterling, the Yen and Dollar weaken at the same time the upward pressure on the trade weighted Euro would be intense. 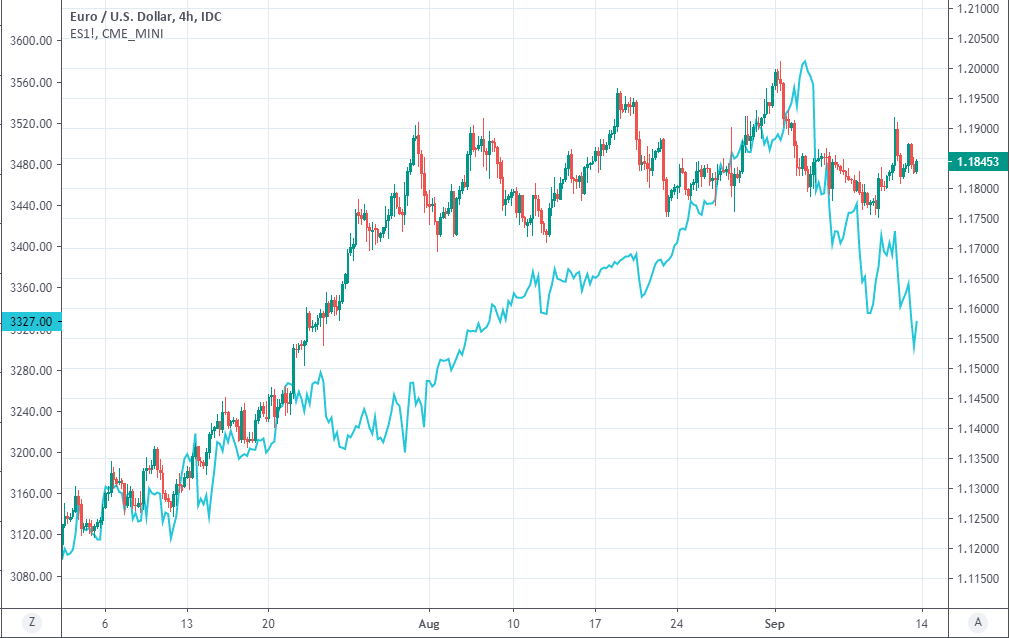 “The EUR based earlier today. We still rather think the market is consolidating but support in the mid-1.17s could well pave the way for a short term bounce back to 1.19,” says Juan Manuel Herrera, a strategist at Scotiabank in a Thursday note. “The 1.1750 level now becomes pivotal for the EUR outlook in the next few weeks; holding above here suggests more chopping below 1.20 while a break down below 1.1750 would tip the balance of risks towards a deeper, corrective drop towards 1.15/1.16.”

Sterling's falls, their uplift to the trade-weighted Euro and the long-term threat posed to the Eurozone economy by a bad Brexit might for some investors mean that a downward adjustment in another part of the trade-weighted index is necessary in the event of further falls in the GBP/EUR rate.

For the EU, the risks stemming from Brexit could be more longer-term and political in nature than with the UK, given that an acrimonious and disruptive exit from the transition period will impact mainly Germany, the Netherlands and France. The UK's largest trade deficits are with those countries and although the post-Brexit British tariff regime is a mild one, and so might not have any immediate impact, the loss of British money will be felt promptly and by already-burdened German, Dutch and French coffers.

Some have already been asked to cross red lines financially for the much-vaunted EU recovery fund, stoking domestic controversy in parts. 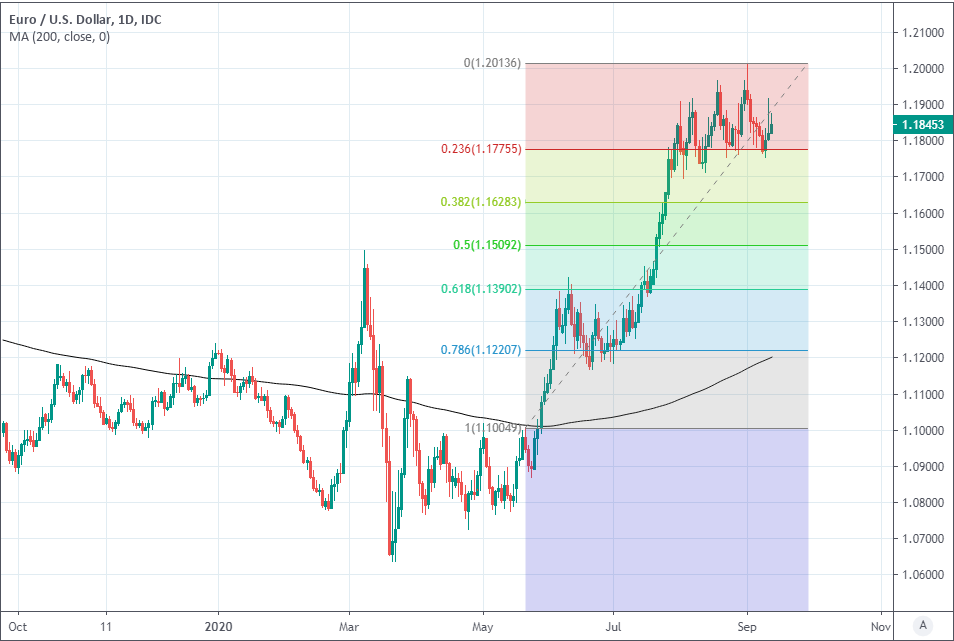 Above: Euro-to-Dollar at daily intervals with 200-day moving-average (black line), Fibonacci retracements of May breakout.

“EUR/USD continues to hold and recover from the 4 month uptrend at 1.1779. The daily Elliott wave count has turned more positive and we favour a near term rebound. Recovery off the trend line will target the 1.2014/15 region,” says Karen Jones, head of technical analysis for currencies, commodities and bonds at Commerzbank. "Only a close above 1.2015 will introduce scope for further gains to 1.2630, the 200 month ma."

Jones and the Commerzbank team bought the Euro-to-Dollar rate at 1.1779 last week but intend to exit the trade at 1.20.

In any case, the combination of ECB currency concerns, a rising ‘no deal’ Brexit threat and looming U.S. election could all act like ball and chains around each ankle of the Euro-to-Dollar rate as it swims back toward the deep waters of 1.19 and above, potentially helping to solidify a ceiling that may have formed around 1.20 since ECB chief economist Philip Lane first spoke out against the currency.

“President Lagarde noted that a stronger currency would affect the inflation outlook, but did not otherwise try to talk down the Euro,” says Zach Pandl, global co-head of foreign exchange strategy at Goldman Sachs.

Lane's Friday sentiments were contrary to those expressed by President Christine Lagarde in the ECB’s September policy update the previous day, and his role at the bank is thought to be of increased importance now because the newly-inaugurated leader of the bank is not an economist or financial practitioner. Christine Lagarde, former head of the International Monetary Fund, is a lawyer by trade much like Chairman of the Federal Reserve Jerome Powell. 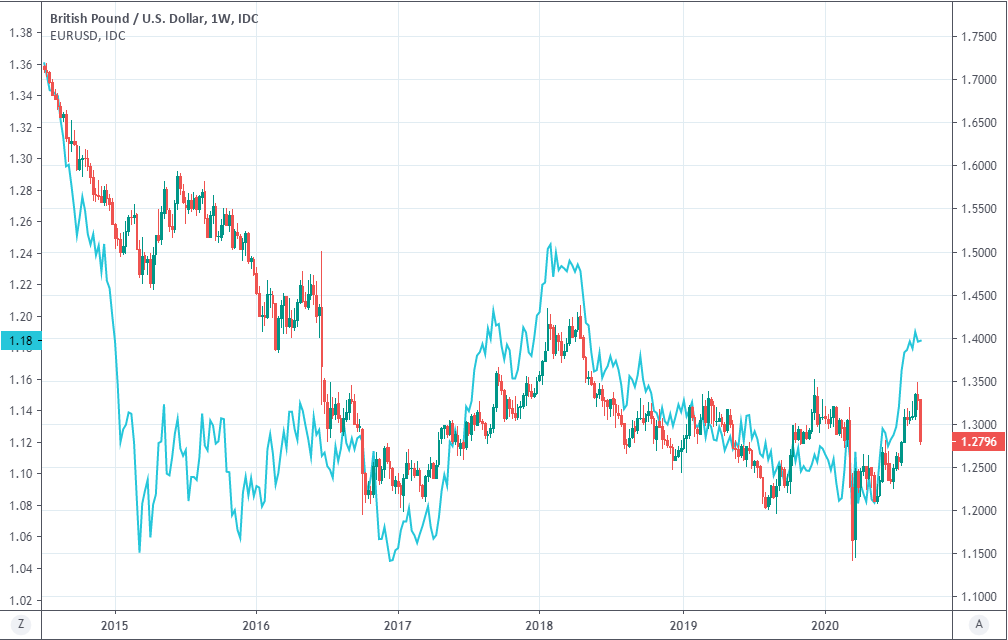 Pandl and the Goldman team say the Euro should follow developments impacting the Dollar Index over the coming months as the U.S. election draws near, and that any victory by opposition candidate Joe Biden can be expected to weigh heavier on the Dollar and might serve to lift the EUR/USD as far as 1.25 by year-end if it comes alongside early approval of a coronavirus vaccine. The single currency is likely to dip back to 1.15 by year-end but rise to 1.25 by September 2021, according to Goldman Sachs forecasts.

The Dollar has a well established history of appreciation ahead of presidential elections while President Donald Trump’s polling disadvantage has recently eased, although his prospects have continued to take on water, and the Euro-to-Dollar rate has a negative correlation with the Dollar Index, of which it is a 57% share. Few if any polls gave Trump a chance of winning in 2016.

"The USD weakening trend has lost a little momentum. Usually there is a 60-day lead/lag pattern between the USD liquidity impulse and changes in the Dollar-index (DXY). If historical patterns are to be trusted, then the USD will regain a little momentum short-term. The negative USD liquidity impulse is temporary and has been driven by the cash hoarding of the USD treasury, why the medium-term trend of a weaker USD should remain intact," says Andreas Steno Larsen, chief FX strategist at Nordea Markets. 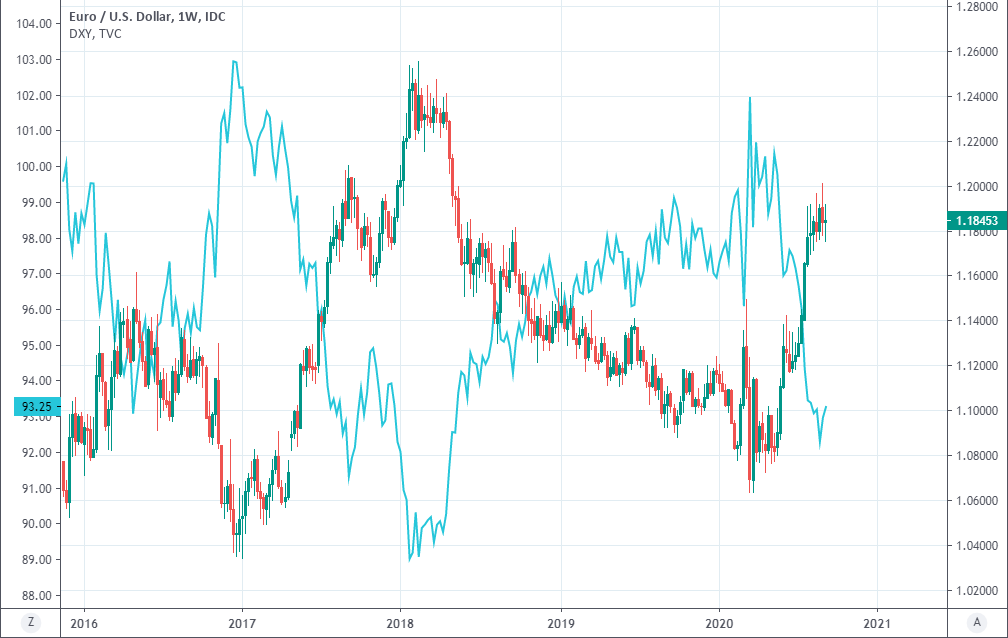