The Euro's strength against a struggling U.S. Dollar looks set to extend ahead of the weekend with the market looking to test 1.19, but analysts say the rally can extend further than this over coming weeks and months.

"This morning EUR-USD is already tickling the next "big figure" (1.19);" says Ulrich Leuchtmann, Head of FX and Commodity Research at Commerzbank.

Leuchtmann says the Euro's strength looks justified, based on recent developments that include:

1) "the (from the market’s point of view permanent) ultra-expansionary Fed monetary policy and the resulting record lows in US yields;

3) Thursday’s proposal by the U.S. President to postpone the elections, "that seems to confirm the worst concerns about the future of US democracy."

All the above, "means the 1.20 mark is within reach," says Leuchtmann. 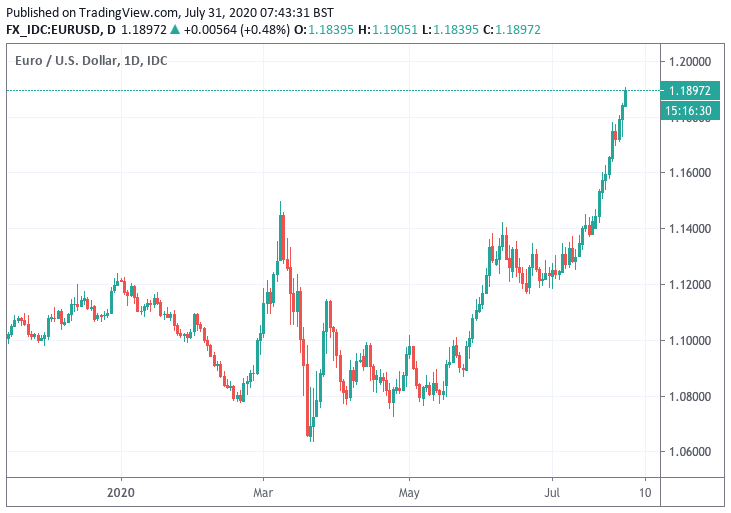 Analysts at Nordic lender SEB says the conditions are in place for ongoing EUR/USD exchange strength, noting that some of the more recent and longer-term drivers of U.S. Dollar strength are fading.

The Dollar rallied sharply in early 2020 as markets scrambled for liquidity as the coronavirus market meltdown ensued. But, "the defensive qualities of the USD and global demand for USD-liquidity, which benefited it at the height of the Covid19 crisis earlier this year, have now turned negative for the USD as global risk appetite has recovered amid unprecedented policy responses by central banks and governments," says Richard Falkenhäll, Senior FX Strategist at SEB.

But perhaps the most important shift with regards to U.S. Dollar demand and performance rests with Federal Reserve policy and its impact on the yield paid on U.S. Government debt.

"To us the most important factor behind the weakening of the dollar is probably the rapid fall in U.S. interest rates following the Fed’s sharp rate cuts in March in response to the lockdown. Much higher U.S. interest rates has attracted capital inflows to U.S. financial assets for several years. With the rate advantage almost gone, with U.S. interest rates at around the same low level as in other countries, this sharp shift has dramatically reduced the attractiveness of U.S. financial assets and the cost of removing an open exchange rate exposure on dollar denominated assets," says Falkenhäll.

But the EUR/USD exchange rate's decisive rally in July is not simply a story of Dollar weakness, as there is genuine Euro strength behind it. Analysts cite the breakthrough by EU countries in approving a €750BN rescue package and €1.02TN budget for coming years, decisions that came in quicker than markets had expected and therefore one that offered up a positive surprise.

"For the outlook of the euro, the decision to issue joint EU-debt may turn out to be a groundbreaking shift towards increased fiscal policy integration among EU members, which is key for the long-term sustainability of the euro. This should benefit the common currency," says Falkenhäll.

SEB analysis shows the Dollar remains overvalued, and further EUR/USD gains can therefore be expected, "the dollar remains overvalued according to our long-term valuation models and a reasonable level for the EUR/USD seems somewhere between 1.20 and 1.25, which suggests that there is scope for a further move higher in the currency pair from today’s level," says Falkenhäll.

Analysts at Wall Street investment bank Goldman Sachs earlier in July told clients they were upgrading their forecasts for the Euro, saying they had grown more confident on an expectation for sustained Euro appreciation.

"Over the coming year we expect investors to take a more balanced approach to the international opportunity set, resulting in a reduction of long-standing USD overweights and portfolio inflows into other major markets, including the Euro Area. Therefore, we are revising up our 12m forecast for EUR/USD to 1.25 (from 1.17), and nudging up our near-term targets as well," said Zach Pandl at Goldman Sachs in New York.

Goldman Sachs economists are not confident that the U.S. asset market dominance over the last ten years will continue, and at least from a GDP growth standpoint, their economists think Europe will actually outperform.