The Euro-to-Dollar rate rally stalled on Tuesday as the greenback steadied against major rivals at oversold levels while analysts mulled the odds of a correction to the downside, which is something that might be growing more likely given the evolving coronavirus situation.

Europe's single currency has been a darling in June and July, offering respite from an down-and-out Dollar amid excitement about the EU's coronavirus recovery budget and push for a more joined up approach to fiscal policy.

The July agreement, which has roots in a late May Franco-German proposal for embattled member states to receive grants and loans from the European Commission, has stoked hopes of a currency union matched by fiscal union and a Eurozone better able to cope with crises in the future.

"We are certainly entering stretched territory although perhaps not yet compellingly so. But what we find most significant about this EUR move is the lack of evidence of leveraged speculative buying," says Derek Halpenny, head of research, global markets EMEA and international securities at MUFG.

Last week's EU27 endorsement of the recovery fund appeared to play a pivotal role in a more-than 2% gain for the Euro. This, and perceptions of an economy that might be recovering from the coronavirus quicker than others, has been a boon for sentiment toward the single currency.

But speculative traders have not been as trigger happy as other investors, while many in the financial media may also have been guilty of overlooking the significance of events on the opposing side of the Euro-to-Dollar equation.

"IMM data continues to show net short EUR positions suggesting that the speculative market has largely missed out on this rally higher. If this is accurate, it strongly suggests further impetus in this move could lie ahead. Given where EUR has now got to it may be more a case of there being strong interest to the downside once a correction takes hold," Halpenny says.

Some speculators have increased bullish wagers on the Euro since May but others have continued bet against it, while some have even added to bearish positions. The result has been a continued net-short position that could cut both ways for the outlook, but which also begs questions about the extent to which the Euro rally was really driven by improved sentiment about Eurozone prospects and how much was the result of fading appetite for the Dollar.

The Euro-to-Dollar rate rose 9% from its range-floor around 1.08 in late May to its 1.1780 peak during Monday's trading session, although much of the rally has also taken place during a period when investors have sold Dollars in exchange for just about every other G10 currency.

"Not bad for a bloc seeing the second-largest economy leave the EU with no guarantee of anything other than trade-shattering WTO terms by year end; or for a tourism-focused region as Spain sees virus cases flare up again, prompting several countries to reimposed lockdown for those returning from it," says Michael Every, a global strategist at Rabobank. "We are just seeing some recent excess wound back – and the question is if it is temporary or not." 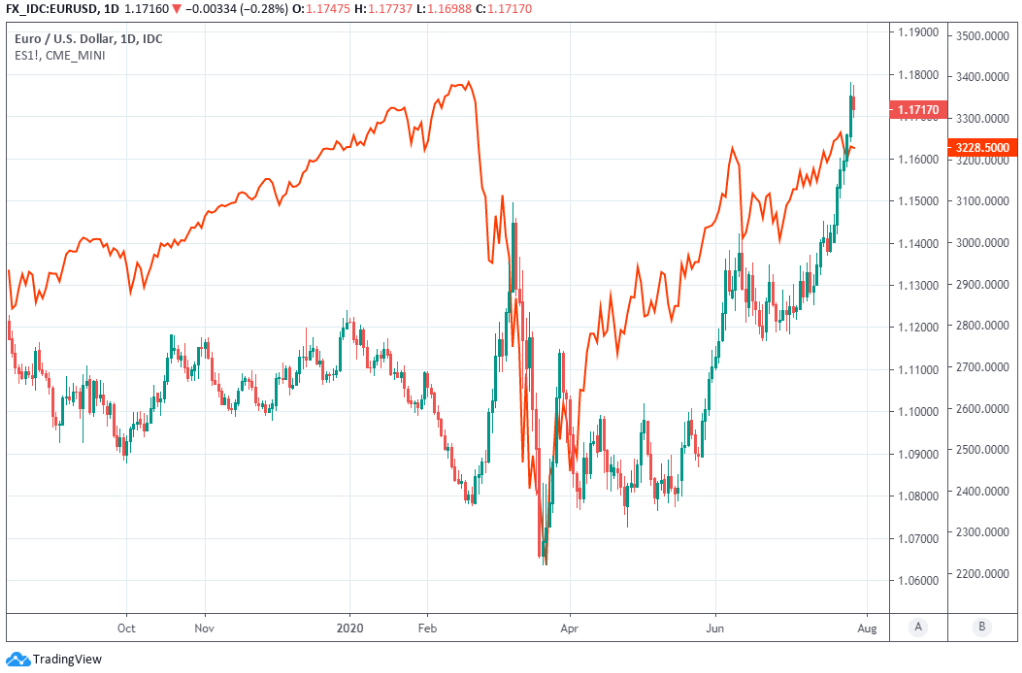 Dollars have been sold hand over fist since early June, taking the Dollar Index down to its lowest level since May 2018 this week, as a second wave of coronavirus infections has threatened the recovery of an already badly damaged economy at a time when the Federal Reserve (Fed) has been pushing the proverbial printing presses to new extreme. When combined with signs of economic recovery and claims of a contained coronavirus in Europe and elsewhere, investors have had little reason to hold the Dollar.

But the Transatlantic tables are tipping again and potentially enough so to bring them back into balance, or worse for the Euro. The UK and Germany imposed fresh restrictions on travellers returning from Spain at the weekend due to fears about a second wave in the Mediterranean country, which could be bad news for the Euro-to-Dollar rate rally if Spain's increase in infections is just the beginning of a broader second wave on the continent.

"With many countries still in their first wave of the Covid-19 outbreak, including the US, more and more are experiencing a second wave...Australia, China, Japan and Spain are just a few examples. In Belgium, wider user of face masks and registration at restaurants have been mandated to avoid another full lockdown. But effectively, this could be defined as lockdown 2.0," says Jeroen Blokland, a multi-asset portfolio manager at Robeco, a buy side firm with €171bn under management in 2019. "At some point this could lead to a significant shift in market sentiment. I still believe that equities look most vulnerable, should this happen." 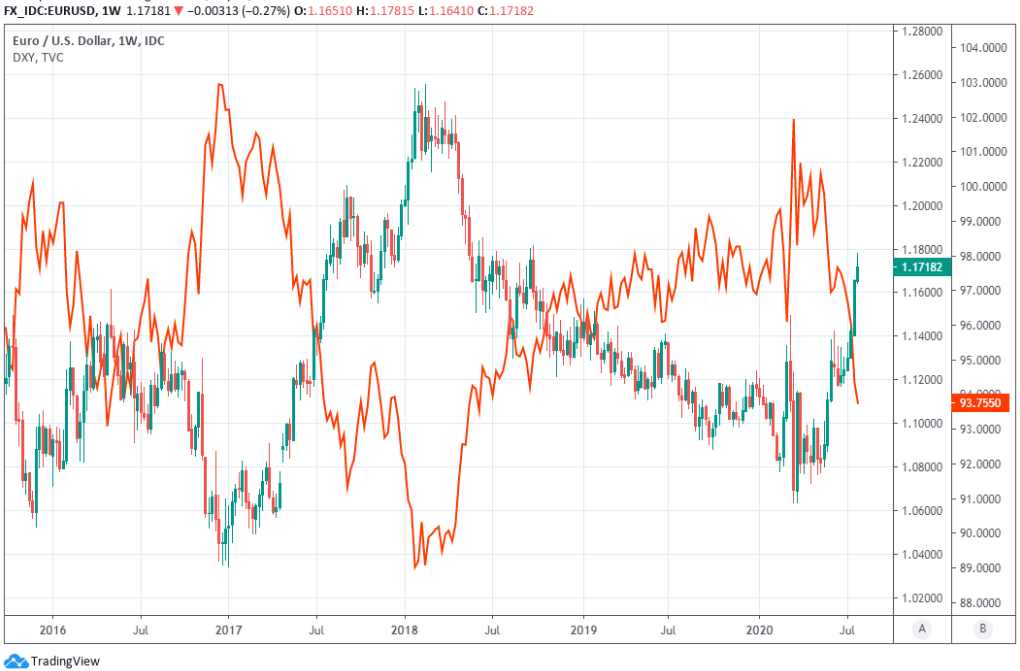 The rally in the single currency and exodus from the Dollar have coincided with if-not been driven by resilience in stock markets, many of which have all but wiped the coronavirus off the charts. But those stocks have risen in part because of investors' perceptions that large parts of the global economy were undergoing or are in line for something like a V-shaped recovery.

Such a recovery would be compromised and non-Dollar currencies left vulnerable if a European second wave leads governments to become trigger happy with 'lockdown' restrictions or if the resurgence prompts businesses and households to take action themselves. This is partly because the Dollar would no longer stick out like a sore or sickly thumb to investors, while sustained disruption in Europe might lead markets to worry about whether the recently approved €750 bn EU recovery fund will be enough.

"Then we come to geopolitics," Every says. "What do you do on China in your lame-duck period in office if you are Trump and you lose the election? Exactly. And read the report in The Australian which notes that major defence strategists around the world last week undertook a “risk assessment” of potential military conflict between China and the US: they rate conflict in the next 12 months as “likely”; over the next two years as “highly likely”; and over the next three years as “almost certain”. Do you really think now is the time to be selling USD, because a moving average says so, or for using this dip to buy them and hold them tightly? I guess it depends if you think nobody else will require another huge stimulus package they can’t afford relative to the US or not. And it depends on if you believe those in market-facing jobs in air-conditioned offices/at home have a better grasp of the likelihood of US-China conflict happening than the people who are involved with war professionally."