The Euro clocked up a 21-month high on Wednesday as the Dollar weakened and after recovery fund fever drew the single currency into a collision with a key technical resistance barrier, an overcoming of which would open the door for a move up to 1.18 in the weeks or months ahead.

Europe's single currency was briefly quoted at 1.16 against the Dollar, its highest since October 2018, after having collided with the 50% Fibonacci retracement of a long-term technical downtrend that dates back to April 2018 and the death of the prior year's European Central Bank-induced rally.

The Euro had advanced more than half a percent at its peak Wednesday as investors continued to shun the Dollar while mulling Tuesday's landmark agreement among EU national leaders, which allows the European Commission to raise monies from the financial markets to finance loans and grants for members seeking to pull themselves out of the crater carved opened up in economies across the bloc by the coronavirus and efforts to contain it.

"Given the 13 count on the daily chart caution is warranted, in fact all our signals continue to say it will struggle here," says Karen Jones, head of technical analysis for currencies, commodities and bonds at Commerzbank, whose been flagging levels above 1.15 as being in the pipeline since June. "Ideally dips lower will be contained by the 2 month uptrend at 1.1348."

Jones says once a daily close above 1.1596 is achieved the Euro would then target 1.1815, which is the peak seen by the single currency in September 2018 and one that also coincides with the 61.8% Fibonacci retracement of the move down from the 2018 peak. But the Euro first has to overcome the 50% retracement at 1.1596 that barred its path higher in the Wednesday session and Jones says the charts are warning that this could take a bit more time. 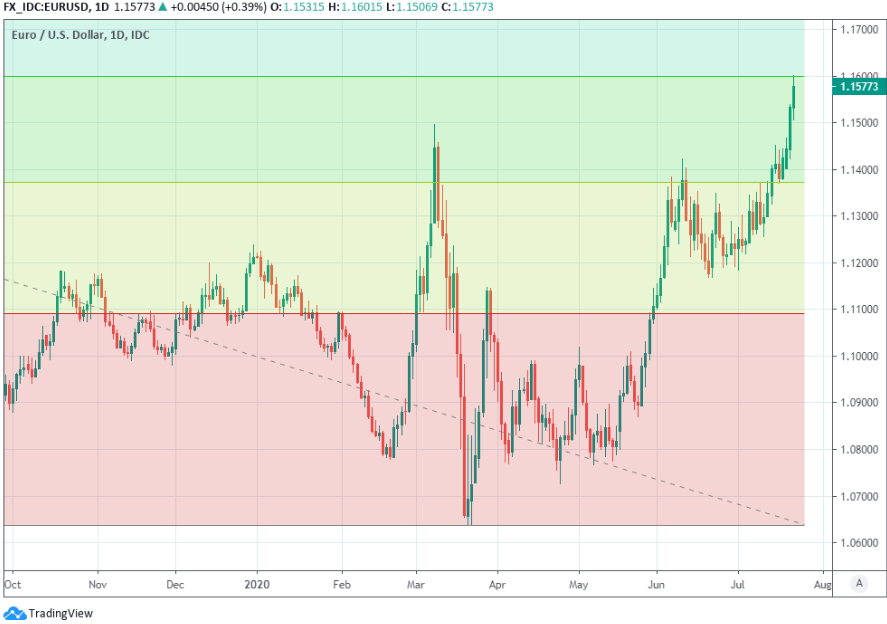 Above: Euro-to-Dollar rate shown at daily intervals with Fibonacci retracements of 2018 fall.

The recovery fund has the capacity to raise the level of fiscal support available in poorer EU nations so that it matches that of the wealthier countries in GDP terms and so might limit the downside for bloc-level GDP. But that was never what excited the Euro or investors, who've instead assigned a greater value to the political signal of solidarity that comes from the mutualised financing of the fund as well as the precedent it creates for dealing with future crises in a bloc long dogged by economic underperformance.

"It is not difficult to imagine various scenarios in which it may fall short. However, in terms of being able to thrash out a compromise which is a small, but important step toward debt sharing, the European politicians may have this week heralded in significant change," says Jane Foley, a senior FX strategist at Rabobank, who's reviewing the bank's forecast of 1.09 for year-end. "The EMU project may not be on the home straight yet, but since the spring the fundamentals behind the EUR have improved. While much of this is priced in, the EUR’s resilience vs. the USD has been provided with an additional boost."

The European Commission will be able to raise €750bn from financial markets which will be supplementary to its next seven-year budget and is to be split almost down the middle with non-repayable grants comprising €390bn of the package while loans make up €360bn. The monies will mostly be doled out over the next two years but only upon European Commission approval of a "recovery and resilience" plan, the terms around which do provide scope for financial and structural economic reforms to be imposed on members, among other things. 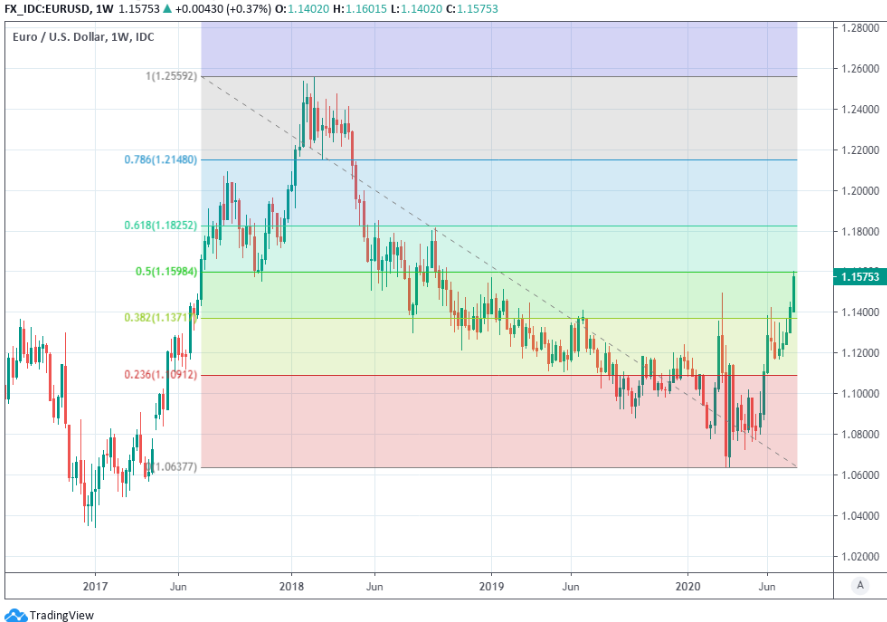 Above: Euro-to-Dollar rate shown at weekly intervals with Fibonacci retracements of 2018 fall.

It's not clear what these and other aspects of the deal mean for EU politics beyond the short-term, much less in the next electoral cycle, but they've provided a backstop for financially challenged members while decisively quelling market concerns about a breakup scenario building. When set against July's increasingly negative Dollar backdrop, Tuesday's landmark agreement has helped to fundamentally turn the EUR/USD table over.

The Dollar had entered the Wednesday session on its front foot amid increasing tensions between China, the U.S. and others in the world but it quickly succumbed to a fresh wave of selling as investors penalised the U.S. currency for an anticipated slower economic recovery, from a lower starting point and after a dire first quarter, as well as reports suggesting the fiscal policy rug will be pulled out from underneath households in August when the paycheck protection programme expires with the July month.

"EURUSD Traders continued to fade 1.1450-70s resistance in the aftermath of an overhyped EU recovery fund deal, but technical breakdowns for the USD against the risk currencies (AUD, CAD, GBP), which were already underway in overnight trade, proved the more dominant force going into the 9amET hour. Spot silver prices then absolutely exploded higher over the next 60mins in a panicky move that saw the EURUSD faders throw in the towel and join the sell-USD party," says Eric Bregar, head of FX strategy at Exchange Bank of Canada. "We’ve witnessed an increased number of instances over the last few months where extreme price movement in the precious metals complex has led broader USD price action on a short-term basis, and so we think this dynamic warrants even closer attention now gold and silver prices are breaking out."

Above: Euro-to-Dollar rate shown at weekly intervals alongside Dollar Index.

The once runaway Dollar has been steamrolled by the Federal Reserve since March while comparatively greater economic damage, the slower recovery and uncertainty over if Washington lawmakers will get their act together in time to avoid pulling the rug from under the feet of voters in an election year have set a cat among pigeons. Dollar woes are compounded by President Donald Trump's flagging performance in pre-election polls, which risks condemning the economy to a Democractic Party presidency in which rising taxes, increased public spending and 'Corbynista' style politics are the order of the day. The most widely publicised polls never gave the incumbent any chance in 2016 either.

These are all supportive factors for the Euro-to-Dollar rate although explosive gains in silver prices are also an increasingly positive influence on the single currency. Silver offers investors the best of both worlds in that it's a precious metal which also has industrial uses so can benefit from safe-haven demand as well as the nascent global economic recovery. That's thought to have begun in May after economies reached their respective nadirs in the prior month.

"Bond yields have little to no room to move higher, even as the global recovery starts to unfold. This means real yields are continuing to fall. Historically, precious metals have done well during periods of falling real yields. In addition, silver is cheaper compared to gold, with the gold/silver ratio still at very elevated levels. The catalyst of the recent rally, however, seems to be the fact that the world is aiming for a ‘green’ recovery, with a significant part of the stimulus assigned to environmentally friendly measures," says Jeroen Blokland, a multi-asset portfolio manager at Robeco, a buy-side investment firm with €171bn (£151bn) of assets under management in 2019. 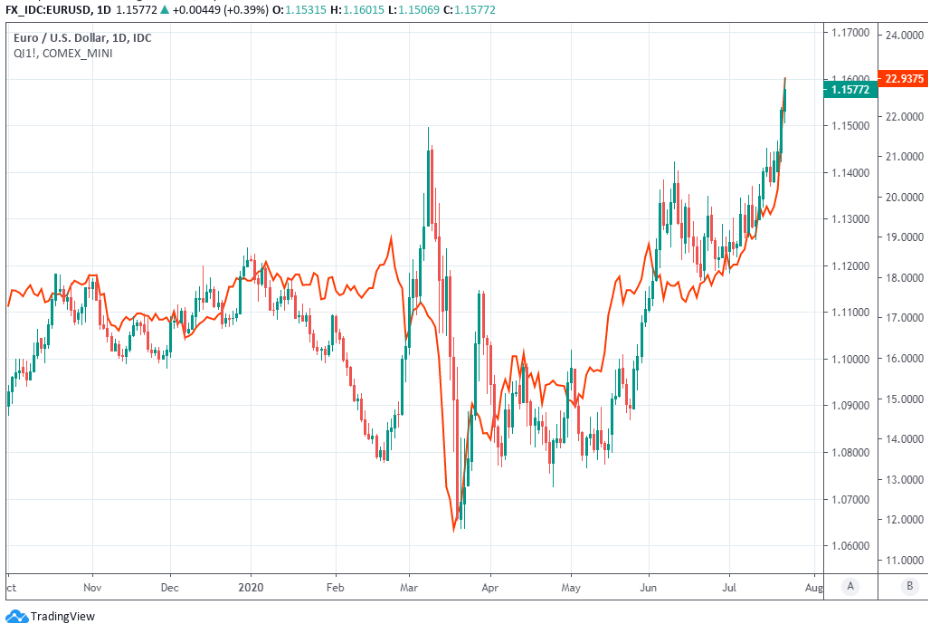