Europe's single currency advanced on the Dollar alongside most major rivals last week even as continental stock markets underperformed their North American counterparts, as resilient sentiment toward the U.S. and global economies kept the safe-haven greenback on the back foot. Increases in U.S. and Chinese PMI surveys helped to keep investors' hopes for a robust global economic recovery alive and some currencies including the Euro supported.

"EUR/USD is still heading for the June peak at 1.1422. This will remain the case while the cross stays above the two month support line at 1.1269 and, more importantly, above the 1.1168 June 22 low," says Axel Rudolph, a senior technical analyst at Commerzbank. "1.1422, together with the March high at 1.1495, represents quite formidable resistance which we would expect to cap at first. However a break higher is eventually favoured."

The week ahead will see appetite for the Euro tested on two fronts, with the most notable being Friday's European Council meeting which will reveal something about the level of work left to do in order for national leaders to reach an agreement on the eagerly-awaited 'Next Generation EU' proposals of the commission. The June proposal for €750bn (£669bn) and its Franco-German predecessor have been instrumental in enabling the Euro to participate in the recovery rally among risk assets in recent months.

"As long as sentiment remains optimistic, the dollar will be on the defensive and other currencies will probably outperform. EUR/USD has risen above 1.13. However, the speculative community is substantially net-long euros and holds small net-short positions in the dollar (the latter happens only occasionally)," says Georgette Boele, a senior FX strategist at ABN Amro, who forecasts a Euro-to-Dollar fall to 1.08 by September. "We think that optimism will fade, and investors will realise that reality is looking somewhat different/less optimistic. When this happens, we expect the dollar to recover, and the euro to fall. This could already happen after the EU Summit." 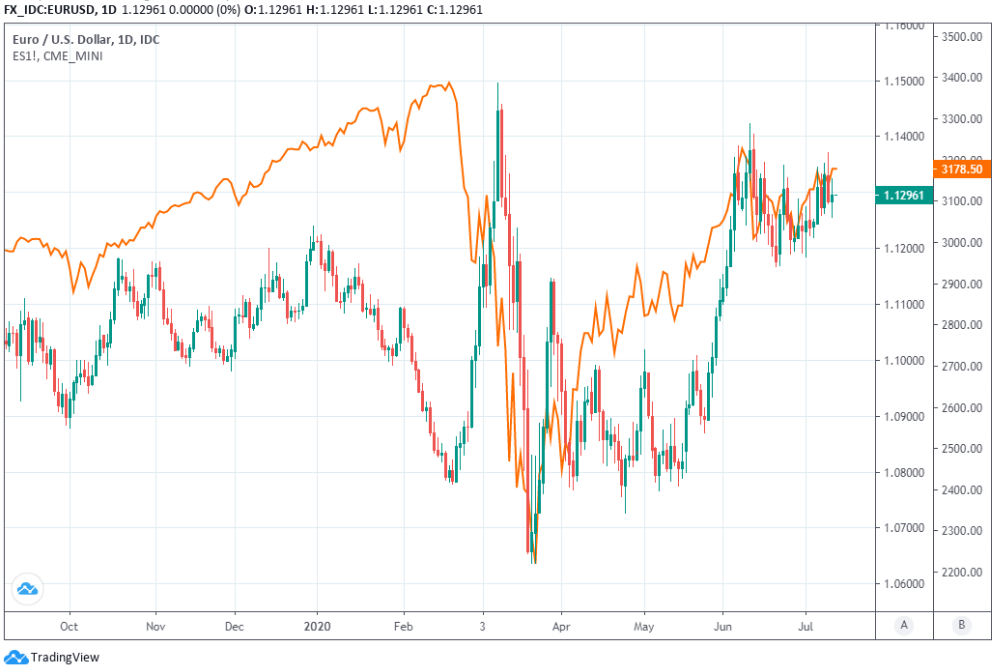 Above: Euro-to-Dollar rate shown at daily intervals with S&P 500 (orange).

Until France and Germany proposed that €500bn of grants be made available to the hardest hit and most financially needy member states, the Euro had lagged the S&P 500 and other stock markets in their recoveries off March lows, which have been followed slavishly by most non-safe-haven currencies. But since then and the Commission's subsequent gambit for €750bn to be doled out as part of its budget, the Euro has caught up with other risk currencies.

"In our outlook for a stronger EUR, we have assumed that the EU will reach a timely agreement on the EU Recovery Fund thereby providing an important foundation for the recent rally to extend higher. However, a lack of progress and/or watering down of proposals still poses some downside risks in the week ahead," says Lee Hadman, a currency analyst at MUFG, who forecasts a Euro-to-Dollar rate of 1.12 by the end of September and 1.15 in time for year-end.

If implemented, the proposals could limit the extent to which Mediterranean countries lag EU counterparts in the race to recovery, and that would also then bolster the collective European recovery at a point when the Eurozone is already thought to have suffered less than the U.S. in the crisis. This could matter for the Euro-to-Dollar rate outlook if it remains the case and feeds through to economist expectations of the coming years, given the Euro-to-Dollar rate follows changes in consensus growth differential. But the fund is far from being a done deal due to divisions over whether it should include grants at all and if so, what the split should be in relation to loans.

"We still feel much more comfortable about the idea of the euro being stronger in 12 months than about what happens in the next week. Consensus 2020/21 growth forecasts have now settled down and the market thinks US GDP will shrink by about ½% less on average in each of these years than the Eurozone. That's a slightly narrower growth gap than was expected at the end of last year, but it's still far too optimistic about US out-performance," says Kit Juckes, chief FX strategist at Societe Generale. "Both a relative improvement in European growth expectations and an absolute improvement in global growth expectations are necessary for a durable euro rally."

European countries including the Netherlands, Austria, Sweden and Denmark, collectively some of the EU's largest monetary backers, have opposed the idea of providing grants and insisted instead on a package comprised entirely of loans. Others, mainly those countries who're most likely to call on the fund, have opposed suggestions and demands that receiving money from it should be tied to the acceptance of conditions including those of further reforms. 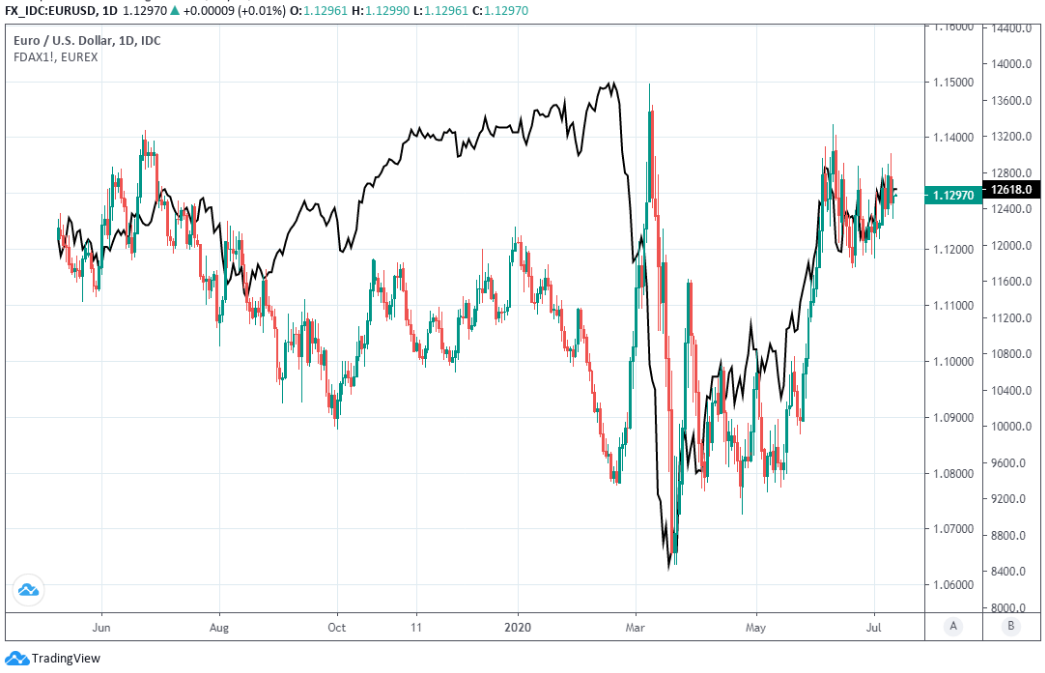 "We don’t expect the recovery fund discussions to be resolved at the EU meeting next Friday. They will eventually, however, and there has been some serious arm-twisting going on lately. Maybe we will be surprised and in such case, our medium-term call for a higher EUR/USD will get a shot in its arm," says Andreas Steno Larsen, chief FX strategist at Nordea Markets, who forecasts a Euro-to-Dollar rate of 1.15 in September and 1.17 by year-end.

Markets have known from the beginning that a deal would not be reached overnight while many analysts and even some poltical leaders have said that one could take until Autumn to thrash out. But nonetheless, if Friday's European Council meeting ends in the same farce as the June meeting the Euro might suffer as a result. Meanwhile, an unexpected declaration that an agreement has been done would be a meaningful positive for the Euro outlook.

In the interim, second quarter corporate earnings numbers are due out of the U.S. in the coming days and those emerging from the banking sector will provide some of the most up to date insight into the current health of American households and businesses available. Anything that contradicts the notion of a swift economic bounceback in from May onward could be enough to trouble the stock markets, Euro and other risk sensitive currencies.

"Expectations for the second quarter are very low, with total S&P 500 earnings per share (EPS) set to be -44.4% on -10.9% lower revenues. This may make for easy beats," says Mark Wilson, chief market analyst at Markets.com. "Investors will be keen to see what the outlook is for the rest of the year – does corporate America see a rebound? If they do it could bode well for equity indices given the amount of cash sitting on the side-lines." 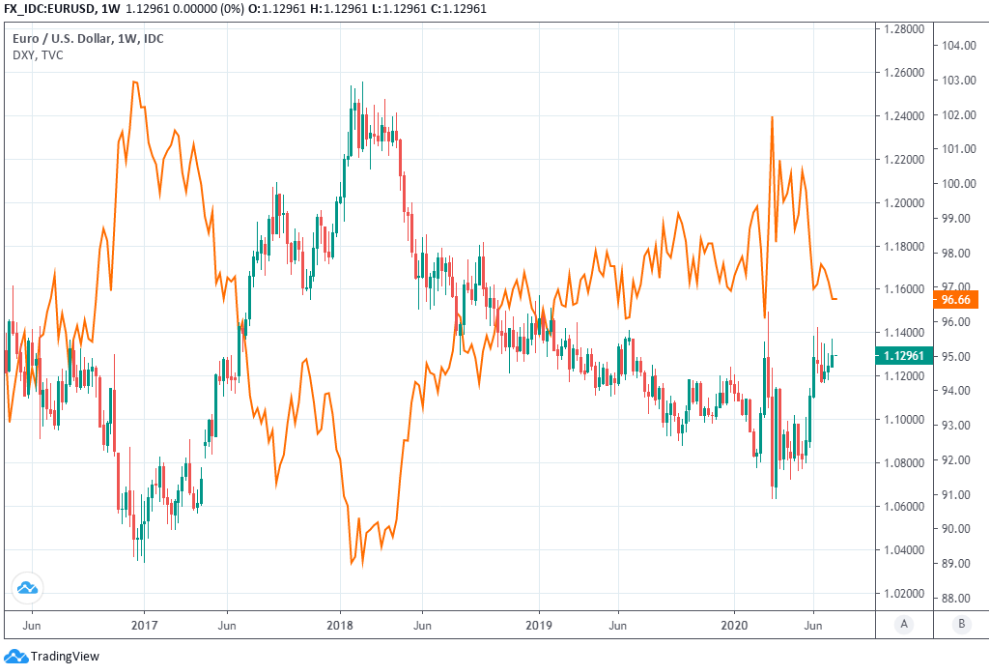 J.P. Morgan, Citi, Wells Fargo, Goldman Sachs, Bank of America and Morgan Stanley are among the big names reporting this week and given many have unique insight into the wellbeing of businesses and households, investors will listen for clues on whether they're right to bet that a v-shaped recovery will be quickly forged in the fires of the coronavirus crisis.

"Earnings estimates and guidance provided across US banks and non-financial corporates carry weight for risk sentiment. In particular, US banks’ perceptions of the economy will provide insight into the flow of credit, NPLs and the growth trajectory. Narrow price ranges across FX, high-yield debt and equities suggest elevated uncertainty over the next move, while the deteriorating pandemic news, fiscal stimulus and economic data add to the probability of a downside break in risk assets," cautions Daniel Been, head of FX research at ANZ. "ECB policy is unlikely to offer any change in current policy settings, while all eyes remain on the direction of the region’s fiscal policy."

Bank stocks have underperformed other sectors in the post-March rebound but could be a source of gains for equity markets and the currencies that follow them if second-quarter updates leave intact investor perceptions that something like a v-shaped recovery is unfolding in the world's largest economy. However, and in amongst all of the earnings news will come the July European Central Bank (ECB) interest rate decision at 12:45 London time on Thursday.

"We expect a repetition of recent comments from various governing council members, thereby striking a cautiously optimistic tone compared to the June projections. We also expect they may decide not to use the EUR1,350bn PEPP envelope in full," says Piet Haines Christiansen, chief strategist for ECB matters at Danske Bank. "Markets may not be prepared for a 'less dovish' message."