- EUR/USD forecasts upgraded at BMO and Nomura amid June rally.
- Seen in 1.14-to-1.16 range in short-term but gains limited thereafter.
- Stock markets, appetite for USD and EU recovery fund all in focus.

The Euro was in recovery mode in the final session of the week and could have scope to advance further in the months ahead, according to upgraded forecasts from BMO Capital Markets and Nomura, although the bulk of the upside may already have been seen.

Europe's single currency was higher with all majors barring the safe-haven Yen and Swiss Franc Friday as stock markets stabilised following their worst intraday losses since March in the prior session, which came amid profit-taking inspired by the June Federal Reserve policy update and what many say were fears about a possible second wave of coronavirus infections in the U.S. Some of the first states to emerge from 'lockdown' are seeing increases in new infections.

"We were surprised by the equity market's initial response to the FOMC; but then again, trends do tend to pause for a breather once in a while," says Stephen Gallo, European head of FX strategy at BMO Capital Markets. "Abundant dollar liquidity, investor risk appetite and US political risk are weighing on the USD. We have revised our 3M EURUSD view up to 1.16, though the degree of uncertainty around our baseline scenario is high."

Equity benchmarks and the investor sentiments that dictate their trajectories have become the foremost drivers of exchange rates since the coronavirus closed down the global economy in March, especially when riskier and often commodity-backed currencies are pitted in opposition to safe-havens like the Dollar, Yen and Franc. The Euro has had a love-hate relationship with risk appetite for years but it too has risen alongside major European and North American benchmarks these last three months. 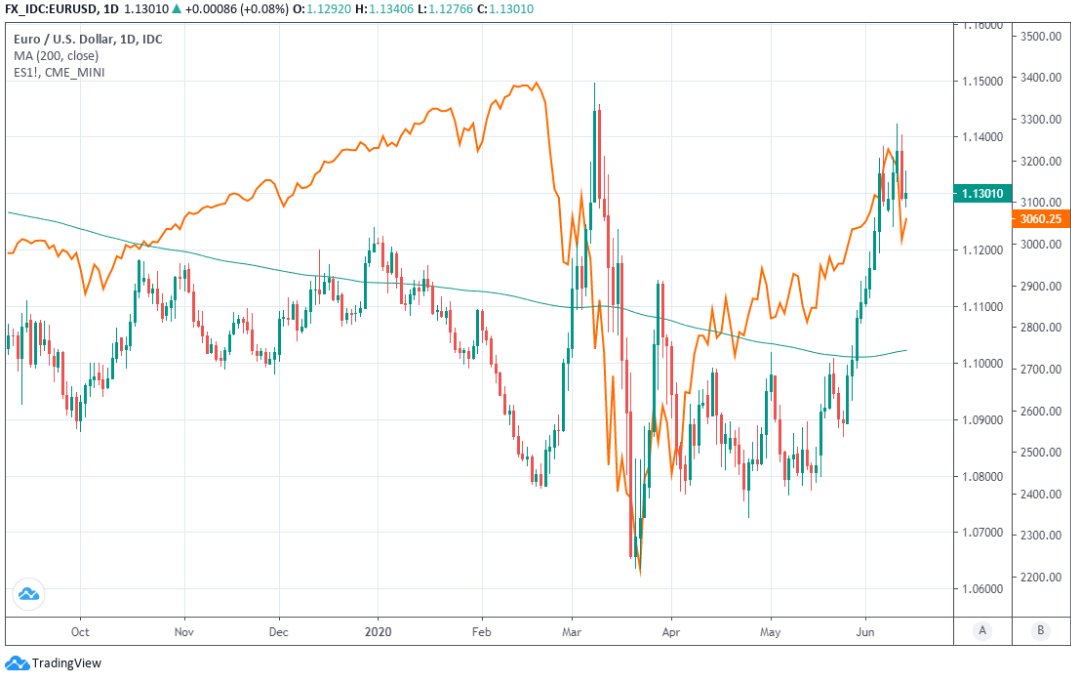 "Traditional fundamentals have not mattered," says Ben Randol at BofA Global Research. "FX trading has been reduced to a leap of faith in the Fed "put" as evidenced by SPX being the only significant factor on average across the top G5 currency pairs in our multivariate framework for the last 10 weeks."

Stock market gains have followed unprecedented central bank efforts to help economies through coronavirus shutdowns, loaning a sense of vindication to the economists and analysts who tipped something like a 'V-shaped recovery' from the damage caused by the virus. That's been positive for the Euro but as more data becomes available in the weeks ahead and sets out relative progress made toward recovery, price action could become more nuanced again.

"We do expect relative economic fundamentals and the global trade environment over the coming 3-6M to help anchor the pair. But at the same time, there appear to be political and socioeconomic trends taking shape which could alter the relative attractiveness of the USD over the medium-term. Given that shifting outlook, we would now describe the challenges facing both the EUR and the USD to be roughly equal," BMO's Gallo says. "We don't see why Fed-inspired "risk-on" should be positive for the USD vs its G10 counterparts for the time being. In order for there to be any sort of flip in that relationship, what we need to first see is more economic data from the US. After that, we would then need to see how the Fed interprets the data, or responds to it."

BMO had looked for the Euro to weaken from 1.07 to 1.05 over the summer months but now looks for the single currency to hit 1.16 by September before declining back to 1.11 by the middle of 2021.

BofA Global Research said Friday "The market has moved against our views, but we remain skeptical," and continues to tip a decline to 1.05 by year-end, citing a range of factors including scope for nuances in economic data and fresh risk aversion to weigh on the currency.

Meanwhile, Nomura upgraded its Euro forecasts this week after turning bullish on the outlook back on June 01. The bank had been betting against the single currency, looking for a fall back to 1.06 through summer but as of Friday was forecasting a Euro-to-Dollar rate of 1.13 for the end of June and 1.14 by September, which is expected to prevail as an average through the New Year.

This change of view coincides with a shift in positioning that has seen investors move from being 'net-short' of the Euro before the coronavirus came along, to being net long after it, which is a position that built further in early June. Euro long positions could still grow from current levels but these kinds of shifts are often said by analysts to be indicative of reduced upside and sometimes, a period of consolidation being in the pipeline.

"We are revising down both our near-term and longer-term forecasts for USD, and therefore revising up EUR/USD and GBP/USD too – in line with our more optimistic view on EUR," says Jordan Rochester, a strategist at Nomura. "A larger-than-expected expansion of the PEPP envelope by €600bn to €1.35trn, purchases continuing to at least mid-2021 (previously end-2020), and reinvestments of maturing principal payments until at least the end of 2022 – have put the ECB ahead of the curve. Together with the EU’s recovery fund proposals and a larger-than-expected fiscal expansion from Germany this week, this makes a substantial wave of additional easing from Europe’s key players." 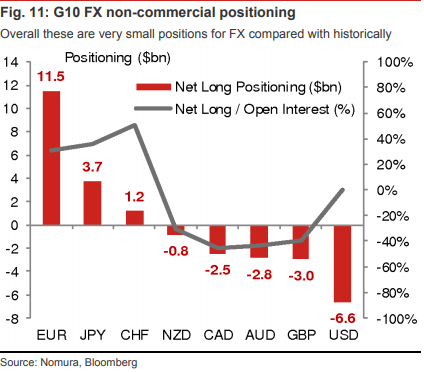 Unlike with some other currencies the Euro hasn't been driven solely by the almost-relentless climb in stock markets because events on the ground in Europe have given investors hope that the continent's economic recovery will be quicker and more successful than with past crises. Politicians have at least begun to talk about a collective, albeit temporary fiscal response that would backstop national support measures if approved, while the European Central Bank (ECB) response has been prompt and aggressive.

Nonetheless, the Euro has risen 2% in June and by 5.7% since it was last found trading at 1.08 on May 18, while the market has become 'net-long' and there are still risks lurking on the path ahead. Eurozone leaders will debate the EU's proposal for a recovery fund next week, which could bring the market's focus back to the various so-far intractable divisions between member states.

Meanwhile, analysts are watching coronavirus infection numbers in the U.S. after some of the early reopeners among states saw infection numbers climb in recent days. White House officials have indicated they longer consider 'lockdown' to be an appropriate response but this wouldn't necessarily stop Americans themselves from shutting themselves away, or the markets from falling on further signs of a fresh outbreak.

The Euro was also on course to be roadblocked for a second time by its 200-week moving-average at 1.1333 on Friday. 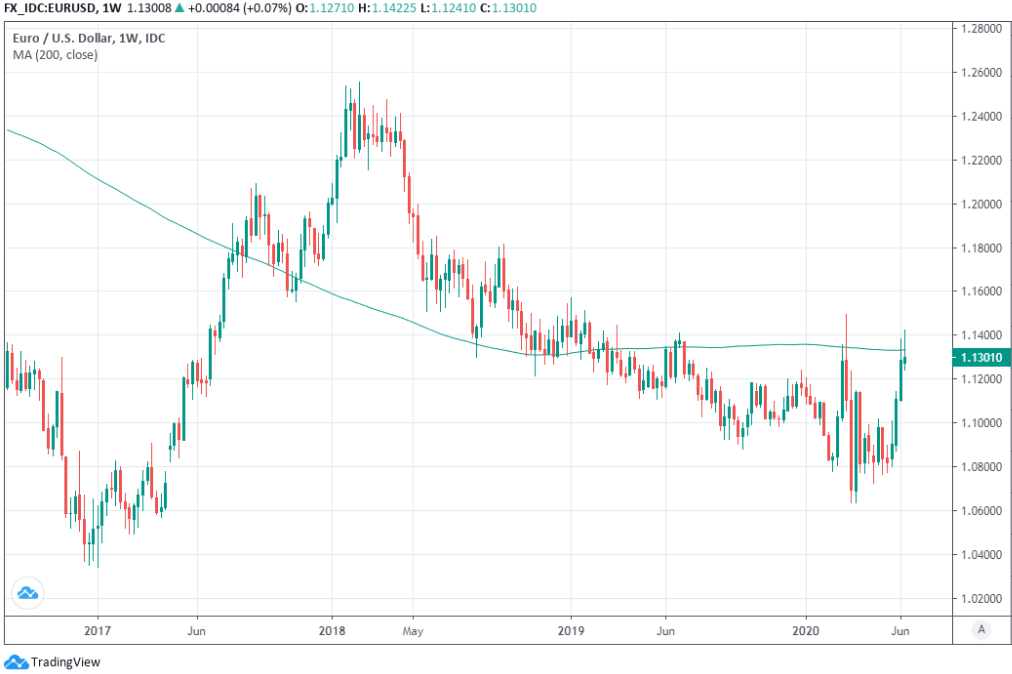 Above: Euro-to-Dollar rate shown at weekly intervals with 200-week moving-average.