Signs of such a decline are growing: the Greenback has shed value against a host of currencies over the course of the past month, with the biggest losses of the past month coming against the commodity currencies such as the Norwegian Krone and Australian Dollar.

However, Dollar losses are now no longer confined to 'high beta' currencies which might suggest a technical short squeeze might be underway, as the likes of the Euro and Pound Sterling are also starting to advance.

In fact, of the world's top ten most traded currencies, the Dollar has only risen against the ultra-safe haven Yen over the course of the past month. 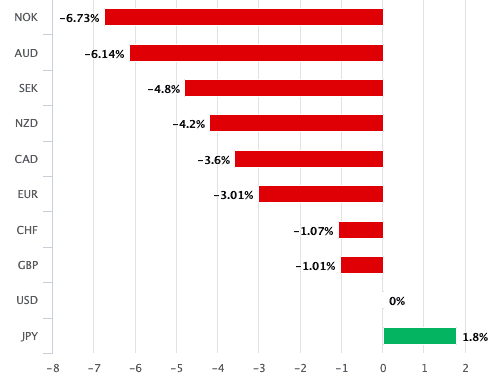 Above: The Dollar's performance over the course of the past month

The move lower in the Dollar has in turn coincided with break above 1.10 in EUR/USD, a move that has been heralded by technical analysts as a sign that the Euro could now be embarking on a more sustained period of appreciation.

"The breakout above $1.1015 was a decisive moment last week on EUR/USD. In completing the upside break from the consolidation rectangle, the implied target was of around $1.1250," says Richard Perry, an analyst at Hantec Markets.

The U.S. Dollar peaked in March amidst a surge in demand for dollars as markets went into meltdown owing to the rapid spread of the coronavirus, but the currency's value soon stabilised and started to retreat following substantial interventions in the market by the U.S. Federal Reserve and other global central banks.

The Dollar index - a broad-based measure of Dollar value against a basket of currencies - fell from a peak just above 102 to then trade a sideways range around 100.

A continuing recovery in stock markets during May has seen demand for the Greenback wane further and the Dollar index has entered a more decided trend towards 97 as a result, a move that coincides with a break above 1.10 in EUR/USD.

"There are signs that the Dollar bear trend is becoming more broad-based and that even EUR/USD, where the speculative market is already substantially long EUR, is considering a top-side break-out," says Chris Turner, Global Head of Markets and Regional Head of Research for UK & CEE at ING Bank. 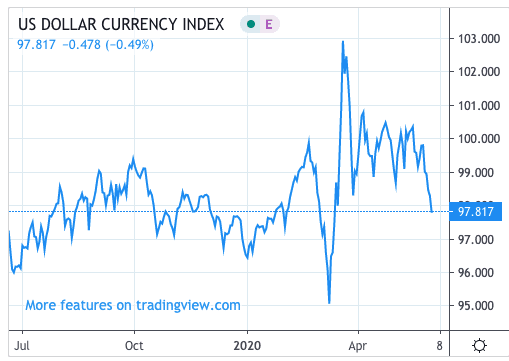 Key to whether the Euro-Dollar exchange rate can return to levels last seen in 2018 is whether or not the pro-EU story - triggered when European leaders announced a plan for a joined-up approach to raising money to fund the post-coronavirus recovery - can continue.

But, it is arguably the Dollar that will have the largest role to play in where EUR/USD trades by the time the year ends, given its position as the world's largest currency.

"For the time being, the momentum is against the dollar and if EUR/USD starts to trade above the 1.1230/40 area on a sustained basis – especially backed by the buying of front end volatility – then EUR/USD could be embarking on a trend towards our year-end target of 1.20 earlier than we expected," says Turner.

However, whether or not the Dollar declines further ultimately depends on whether investors continue to buy into the global recovery story, which comes at the Dollar's expense.

Any capitulation in stocks would ultimately favour the Dollar once more. Foreign exchange analysts at Rabobank maintain such an expectation as they see a risk that there will be another surge in safe haven U.S. Dollar demand over the course of the next three months.

"Investors are being forced to decide whether to jump on the risk-on bandwagon to avoid being left behind, or whether to retain a cautious tone ahead of an inevitable onslaught of bad economic data and a potential worsening of trade tensions between the US and China. We see risk that the latter will be instrumental in containing risk appetite in the months leading up to the U.S. election and potentially beyond," says Jan Lambregts, Head of Research, Global Economics & Markets at Rabobank.

"Therefore, we expect to USD to find solid support in the coming months," adds Lambregts.

Rising geopolitical tensions should be watched by investors according to Rabobank, who note that far from unifying the world, the cover-19 crisis has widened cracks.

The focus for tensions rests between the U.S. and China, understandably as these are the world's two preeminent super-powers. The U.S. has sought to ramp up pressure on China for its part in the origins of the covid-19 virus, as well as its early handling of the outbreak.

With its back up against the wall, China has in turn become increasingly belligerent, and has struck out at Hong Kong by bringing it under Beijing's control via the passing of new security laws.

"The risk of further escalation, including but not exclusive to Hong Kong losing its special status, are all too real, and would have significant implications for the global economy, markets, and national security. For anyone who thought the New Cold War had gone away with the phase one trade deal this is a very rude awakening," says Lambregts.