- As risk appetite set for recovery, could lift EUR/USD early on.

- But EUR/USD's technical damage on charts a risk to outlook.

The Euro unwound almost all of its late March rebound against the Dollar last week and the charts are warning of more losses ahead, although weekend confirmation of a broad slowdown in the continental spread of coronavirus could lift risk appetite over the coming days and possibly the Euro-to-Dollar rate too.

Europe's single currency fell more than three percent last week, the most significant move to the downside since all of about a fortnight ago but not quite as large as the 4.5% gain seen in the prior week. The significant-but-also-insignificant price action last week is testament to the scale of the step-up in volatility seen through March, a boon for trading and hedging oriented businesses long starved of volatility beforehand, but a potentially perilous development for those exposed to exchange rate risk.

"EUR/USD has swung wildly with the average intra-day high/low range over the last four weeks amounting to nearly 5 big figures. The move this week, captured in that average, is smaller – at 380 pips underlining the impact of the actions taken by the Fed and other central banks to bring the financial markets back to normal trading conditions. But despite the added sources of USD liquidity the dollar remains very well supported and the short-term direction remains to the downside for EUR/USD," says Derek Halpenny, head of research, global markets EMEA and international securities at MUFG.

Losses for the Euro were exacerbated by investor exasperation with the the lack of a common solution from politicians and policymakers stood behind the common currency, to the economic fallout of the coronavirus crisis. National governments have pulled out all of the stops in order to plug the hole they themselves have punched into the side of their economies with actions to slow the spread of coronavirus, actions taken with a view to preventing health systems from being overloaded to the point of collapse.

Last week's price action has left the Euro-to-Dollar rate on course for a return to the 1.0778 mid-February low, which is now expected to provide support to the exchange rate if it is actually seen in the early days of the new week. The response of investors to the latest coronavirus infection and fatality numbers released in Europe and the U.S. over the weekend will be the first and foremost drivers of price action in the coming days while these afore and latter mentioned technical factors mark the likely price confines. 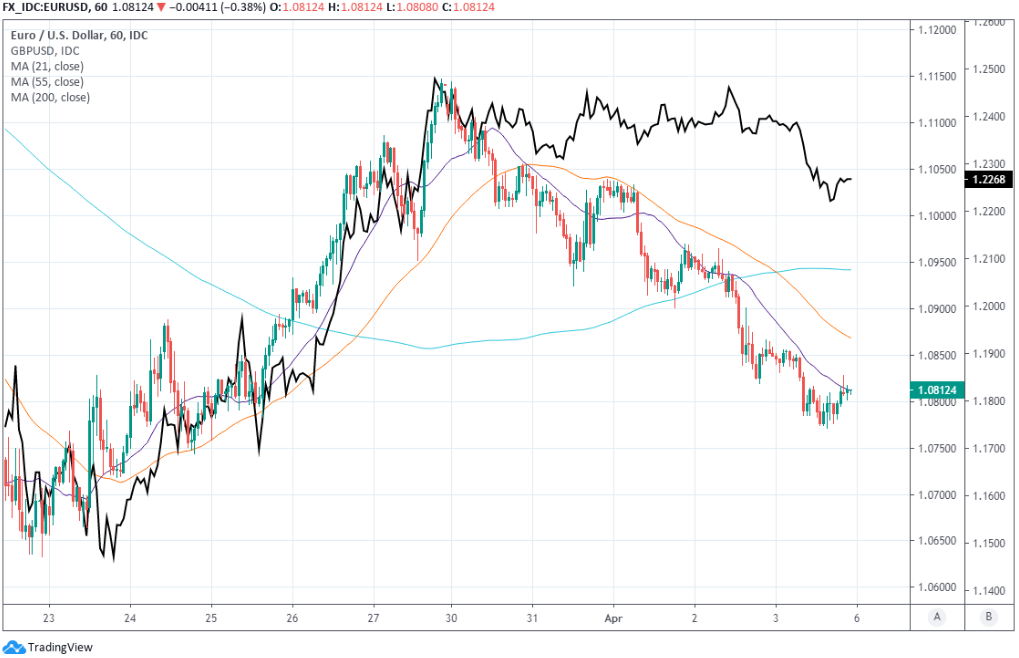 Gains and losses over the last month had done significant damage to the technical picture on the Euro-to-Dollar rate charts although the late March rebound has given the exchange rate an opportunity to neutralise what has rapidly turned from a bullish short-to-medium-term outlook into a bearish one. Commerzbank's Jones is betting the Euro-to-Dollar rate will mitigate the downside pressures and move onto a more neutral footing, which might mean a return to range-bound trading within narrow confines up ahead.

"Distortions aside, though, the number of tests continues to rise, and the proportion of positive tests is beginning to fall," says Ian Shepherdson, chief economist at Pantheon Macroeconomics, referring to the number of new coronavirus cases confirmed in the U.S. "Case growth continues to slow in continental western Europe...Elsewhere, Spain, Germany, the Netherlands and Austria all reported the lowest daily increases since the crisis began."

There is support for Jones' view of a more neutral Euro-to-Dollar rate footing coming from the weekend's coronavirus case count, which showed widespread declines in the rate of increase for new confirmed infections. This was true in all of Europe's major hotspots and also in the U.S., with declines coming despite an increase in the number of coronavirus tests being carried out across countries. 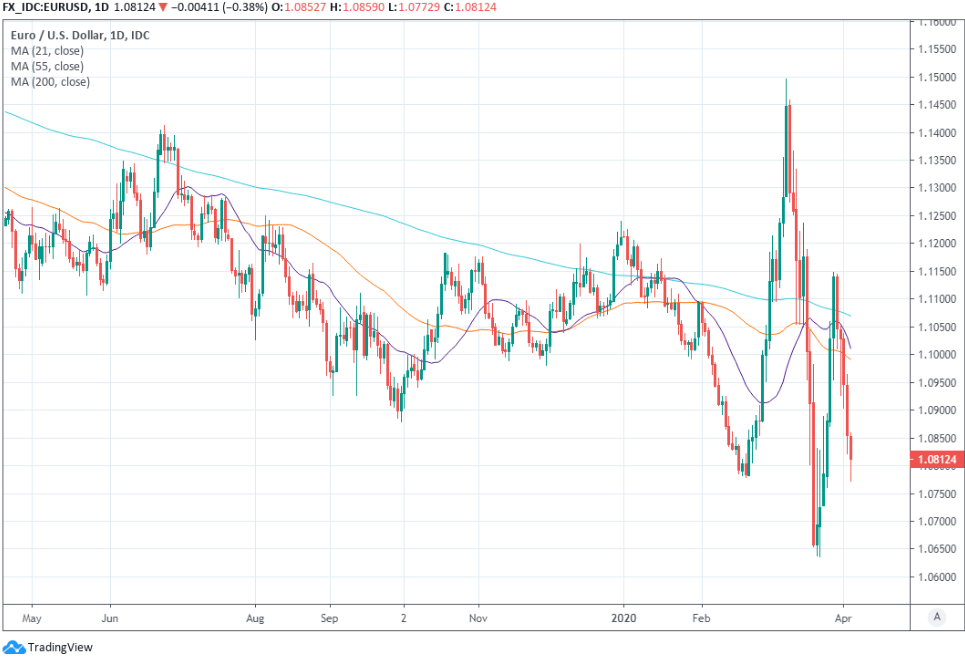 Above: Euro-to-Dollar rate at daily intervals. Fails to sustain break above cluster of moving averages on multiple occasions.

"For now it’s likely high beta FX will continue a slow grind higher, with the fall in ICU cases in Italy and Spain a potential forward-looking reason why markets would be “pulling forward the future outcome.” This is until the next wave of lockdown extensions and/or credit risks popping, which is just a matter of timing in our view," says Jordan Rochester, a strategist at Nomura.

A slower spread of coronavirus could conceivably engineer an improvement in risk appetite early in the new week which might lift the Euro and weigh on the Dollar, especially after the greenback benefited from a classic safe-haven-seeking bid late Friday after the March non-farm payrolls report showed the coronavirus wiping out almost all the job gains accrued during the Trump presidency. Four years of gains up in smoke within one single month.

The fact that Friday's non-farm payrolls report didn't send the greenback tumbling could be taken as a sign of long-established behaviours and currency correlations returning after a brief coronavirus-mayhem-induced hiatus.This should produce a Euro-to-Dollar rate that rises and falls with risk appetite unless and until investors become willing to again take a punt on the higher-yielding emerging market currencies, at which point interpreting Euro-to-Dollar rate price action becomes an art as well as a science.

The pace at which the coronavirus spreads is the most important driver of financial markets and exchange rates at present although some analysts expect that in the coming weeks the market focus will shift from the rate of spread to the pace at which so-called 'lockdowns' can be lifted. There are a number of economic figures due out over the coming week although many relate to the pre-lockdown period and few will tell investors anything they don't already know.

"Why we remain short EUR/USD looking for 1.06-1.07 later this month The ECB should also look to be increasing the rate of purchases as the PEPP gets underway, making the differential between the ECB and the Fed’s balance sheet growth rates narrow to the benefit of the USD. That combined with a less coordinated EU fiscal policy response, higher credit risks after what was already a poor year of growth in 2019," says Nomura's Rochester. 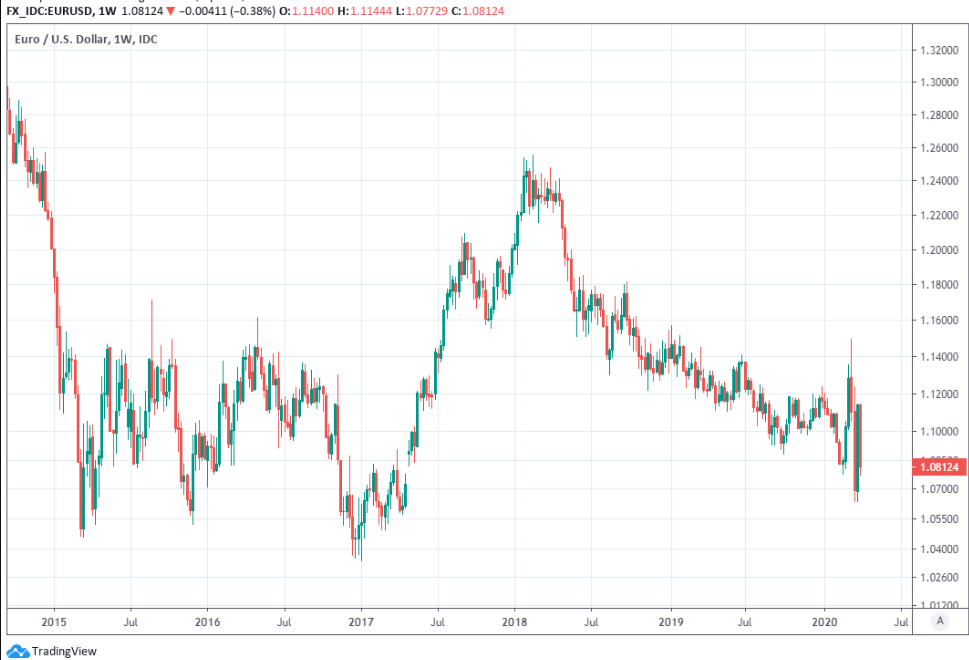