- But earlier break of 35-year trendline is bearish omen for EUR.

- And USD seen resilient from here after worst week in two years.

The Euro-to-Dollar rate closed out its best week for more than a decade Friday after a broad decline in the greenback gave other currencies breathing room, although whether the recovery can be sustained over the coming days will depend largely upon investor appetite for the Dollar.

Europe's single currency rose from near the bottom of a multi-year range against the Dollar last week, gaining 4.2% in what was its strongest one-week gain since December 2008, as the U.S. currency retreated from all major rivals following a volley of Federal Reserve (Fed) actions that were aimed as much at neutering a runaway Dollar as they were at bunging a hole in the side of the world's largest economy.

Dollar demand and the factors compelling it have dominated price action in most exchange rates of late although that demand all-but evaporated last week following an earlier decision by the Fed to extend Dollar swap lines to more central banks. Many analysts cite that and other actions taken by the bank as significant in reigning in the greenback, although increasing momentum in the U.S. coronavirus outbreak is also said to have played a role too last week.

The Dollar deluge, action from other central banks and strong fiscal policy support packages from national governments helped to lift risk assets like stocks last week while providing once-battered and bruised currencies like the Euro with room to breathe following punishing declines.

"Above 1.1081 targets the December and January and March 16 highs at 1.1224/40. This area guards the 1.1495 March high," says Karen Jones, head of technical analysis for currencies, commodities and bonds and Commerzbank.  "Initial support is the 1.0778 mid February low, failure here should focus interest back on the downside. Longer term the market has eroded the 35 year uptrend at 1.0782/74 on a weekly basis. Failure here is considered to be a major break down and targets 1.0340, the 2017 low." 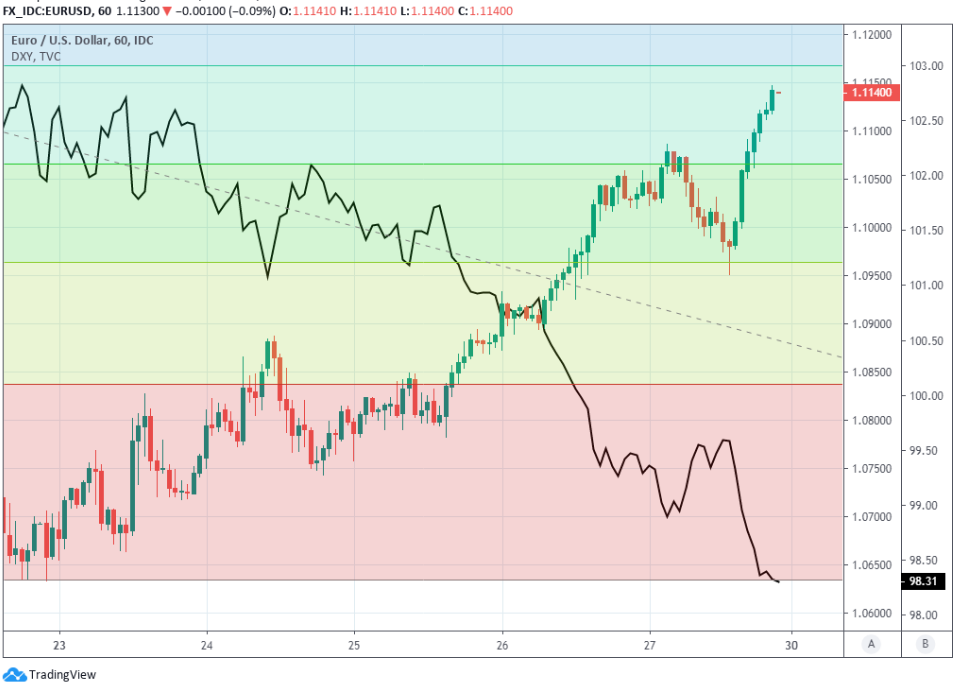 Last week's gains have seen the Euro overcome a cluster of moving averages that were previously expected to bar its path higher on the charts, potentially opening the door to even higher levels in the coming days.

Commerzbank's Jones says "Elliott wave counts have turned more positive" on the charts and that now the exchange rate has overcome the 55-day and 200-day moving averages, it could go on to reach 1.1240 over the coming days and potentially, the earlier March high of 1.1495.

However, she's also warned that this month's break of a 35-year trendline has left the single currency exposed to the risk of a decline back toward its 2017 low of 1.0340. The Euro rose more than 4% last week but it had fallen by almost as much in the prior week and in the process, closed below the 1.0782/74 in what was a bearish technical development as far as the outlook goes.

"We have seen a slight positive correction in risk assets as a result of all the packages from central banks and administrations, but we still see larger risks on the downside than on the topside and bet on prolonged curfews from a risk/reward perspective. This should allow currencies such as USD and JPY to stand strong until summer," says Andreas Steno Larsen at Nordea Markets.

Larsen has warned that a repeat of the early March sell-off in stock markets and other risk assets would threaten to put the Euro at parity with the Dollar. Neither Larsen nor Jones are alone in looking for those kinds of levels as BofA Global Research downgraded its forecasts for the Euro last week. 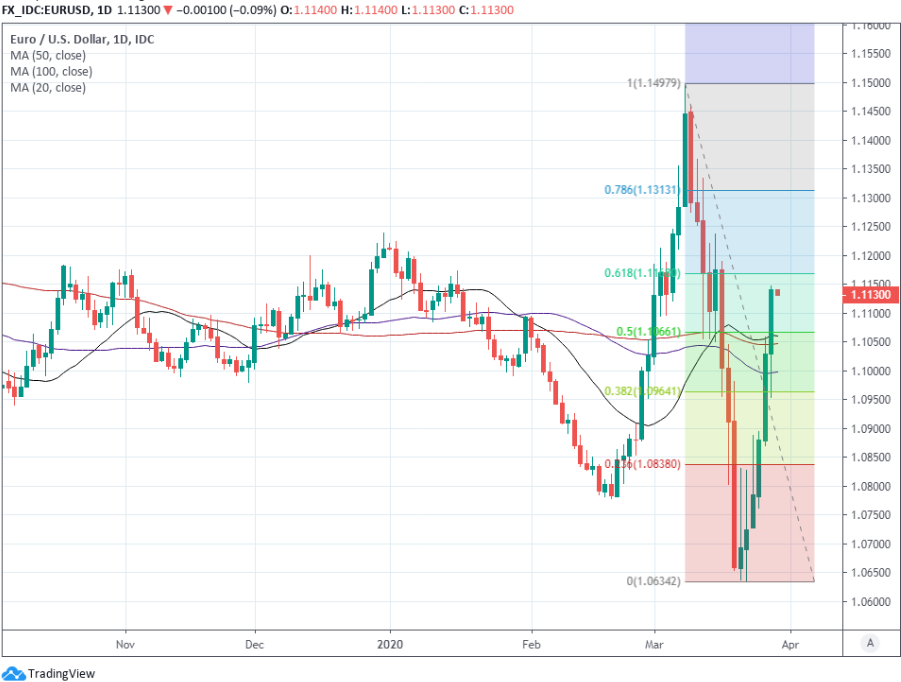 Above: Euro-to-Dollar rate at daily intervals with moving-averages, Fibonacci retracements of March downtrend marked out.

"Financial markets have been reeling as COVID-19 pushes the global economy into recession. The FX market has been jolted awake, and the US dollar has been rising as demand surges," says Athanasios Vamvakidis, head of FX strategy at BofA Global Research. "The COVID-19 induced recession in the Eurozone is shaping up to be much worse than in the US. We expect EURUSD to weaken to 1.02 in Q2 and Q3, recovering gradually to 1.05 by end 2020."

The medium-term outlook for the Euro has darkened in line with the prospects of the Eurozone economy, which has seen citizens in almost all of its largest members subjected to at least some form of 'lockdown' in which they're prevented from leaving their homes except for in certain circumstances. Many are being prevented from going to work while businesses across the continent have been instructed to close as part of efforts to contain the coronavirus outbreak, which are almost certain to deal an unprecedented blow to the economy this quarter and next.

It's those darkening prospects for Europe and the rest of the world economy that have stoked safe-haven demand for the Dollar, the ebb and flow of which will be key to the Euro-to-Dollar rate's performance in the week ahead. Many say the Dollar should remain firm in the months ahead and given that it closed out on Friday what was its worst week for more than two years, there could also be a chance of a corrective bounce early this week which might send the Euro into a fresh retreat. The Dolla is expected to outperform despite the U.S. being on course to become the epicentre of the coronavirus pandemic.

"We fully recognise the uncertainty about the persistency and durability of the impact of the Covid-19 crisis on the global economy. But given the measures already taken and USD funding situation improving, we may now move away from the abrupt, many times seemingly irrational FX moves, whereby global currencies depreciated or appreciated abruptly vs USD," says Petr Krpata, chief EMEA strategist for currencies and bonds at ING. 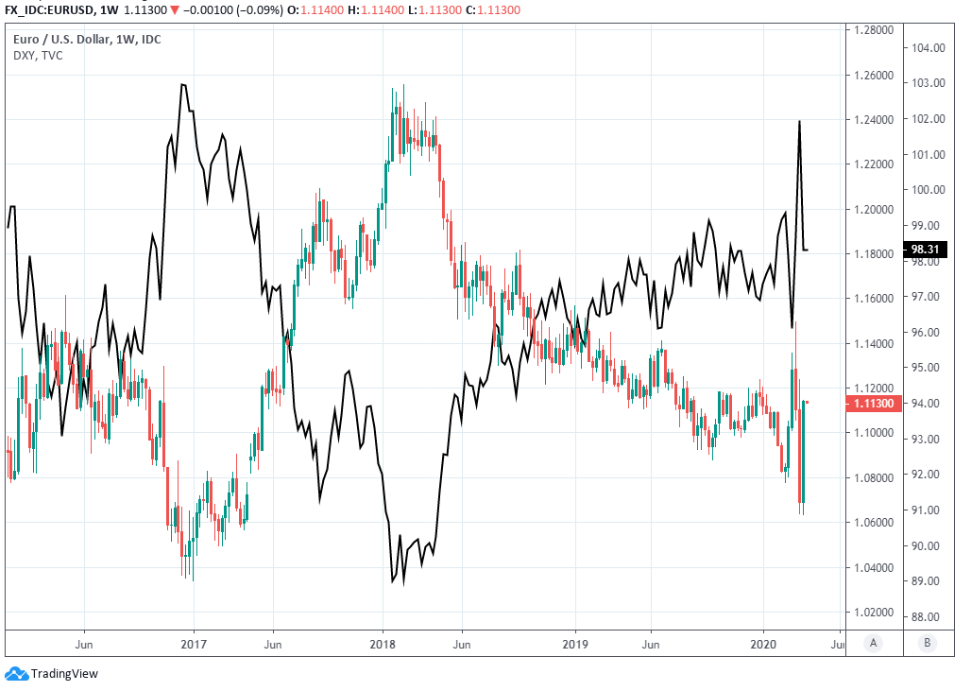