-But an upside bias remains if market holds above both.

-After speculative positioning nears neutral in wake of rally.

-USD demand a risk to EUR but joint EU debt an opportunity.

The Euro-to-Dollar rate was testing support on the charts Wednesday and could now find gains are harder to accrue given recent volatility has cleared out ‘short’ positions that had leaned against it for so long previously, although it's tipped to retain an upside bias in the weeks ahead.

Europe’s single currency has tested technical support around 1.0941 against the Dollar twice at the midweek junction and was headed for a third test of it on Wednesday, while technical analysts have warned that a fall beneath it would open the door for a move toward the 1.0879 October 2019 low. That’s the last defence of a 20 year uptrend in the exchange rate, which must remain intact to keep the long-term outlook from turning bearish.

“EUR/USD’s renewed slide is taking it back towards the early and mid-September lows and the October 8 low as well as to the breached three month resistance line at 1.0941/26 which so far seems to hold. If the cross doesn’t stabilise there, the October trough at 1.0879 would be back in play,” says Axel Rudolph, a technical analyst at Commerzbank. “While it underpins, the 1.1570 January 2019 high and then the 1.1815 September 2018 high will remain our longer term upside target.” 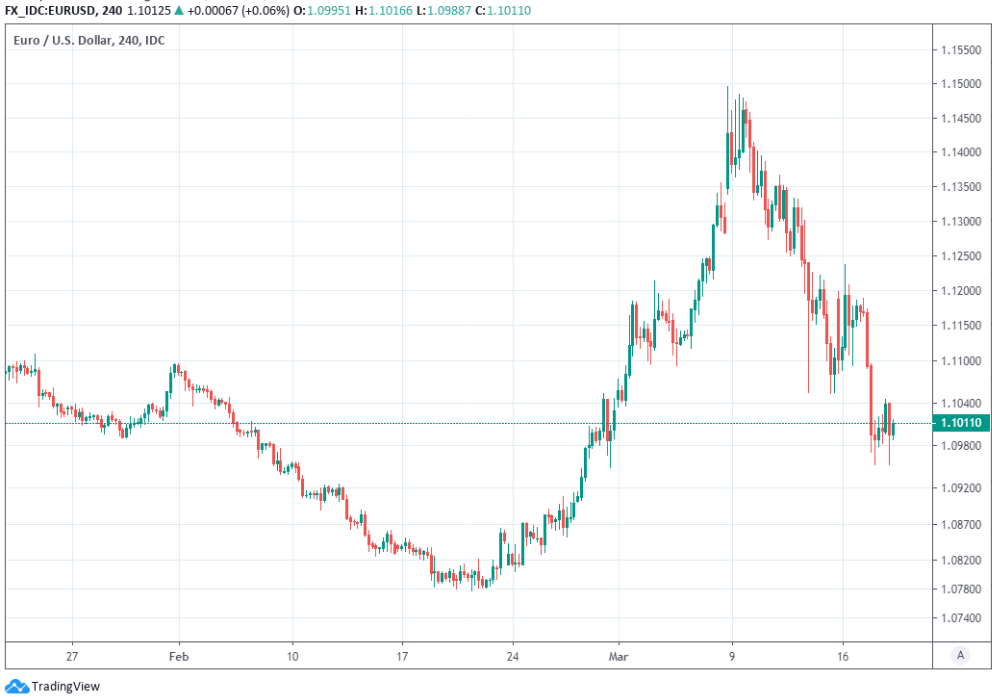 Rudolph says the Euro-to-Dollar will need to rise convincingly above the 1.1224 level before a challenge of the 1.1570 January 2019 high becomes a near-term prospect, and that this will require it to overcome resistance near the 200-day moving-average of prices at 1.1096. He expects this to happen within the next three weeks and says that once above 1.1570, the Euro could target 1.1841 and 1.1950 over the subsequent three months.

This will keep the Euro within a 35-year uptrend that could eventually see it could come into contact with the 55-quarter moving-average at 1.2719.

“The major support level on the chart is the a 35 year up channel at 1.0792, while this holds on a closing basis we will maintain a longer term bullish bias,” says Karen Jones, a Commerzbank colleague of Rudolph’s.

Both 1.1950 and 1.2719 are long-term downward sloping trend lines that could resist the Euro’s initial advance, and that’s after it gets to the initial test, which might take time especially if the Dollar remains on its front foot. 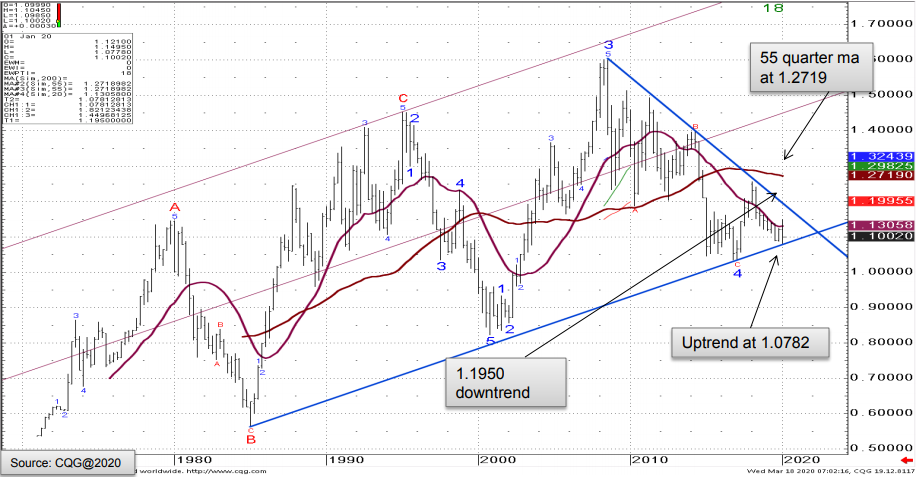 The Euro ceded ground to the Dollar, which rose against all major rivals Wednesday in a risk-averse currency market that saw demand for only the liquidity of the greenback and safe-havens like the Yen and Swiss Franc as investors continued their rotation into cash, leading stock, commodity and even some bond markets to suffer fresh losses.

The Euro has been bleeding lower since topping out near 1.15 last Monday in what is a potentially significant turn in the market because it coincided with investor positioning in the futures market swinging from a large net ‘short’ to an almost neutral position following days of extreme volatility and ultimately, losses for stocks, commodities and emerging market currencies. Previously investors had borrowed and sold Euros to fund bets on higher yielding currencies and other assets, leaving them with a large ‘short’ position in the single currency that was reversed promptly in late February as stocks and emerging markets crumbled in tandem with the advance of coronavirus into Europe.

“Net EUR short positions plummeted last week suggesting the EUR had been heavily oversold and that carry trades have been reversing. Now that net positions are close to neutral, the worsening economic outlook in the Eurozone could pressure the EUR,” warns Jane Foley,  a senior FX strategist at Rabobank. "USD net longs dropped sharply last week following the Fed’s surprise 50 bp rate cut and the expectation that it will cut again soon. That said the sharp widening of cross currency basis swaps in the latter part of last week signalled a USD shortage in the money market. This could translate into an increase of USD longs in the next set of data." 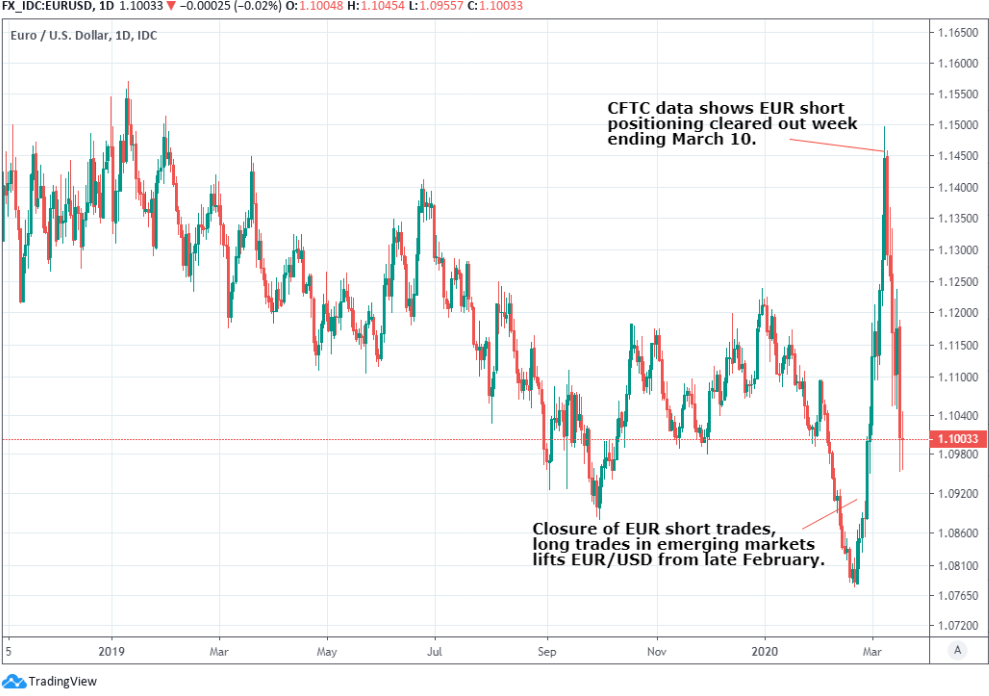 The Euro-to-Dollar rate rallied by 6% through the early weeks of March as investors liquidated bets on risk assets and bought back the Euros they’d been funded with, but Chicago Futures Trading Commission data revealed this week that a large part of this process completed in the week ending March 10, which coincided with the Euro reaching its highest levels. This could explain why the Euro has fallen amid the current bout of risk aversion in which stocks and commodities have suffered further steep losses, when previously it spiked sharply as risk asset prices tanked. It could also leave investors minded to rebuild their 'short' position given the economic threat to Europe.

Rabobank’s Foley says this clear out of 'shorts' could leave the Euro vulnerable to the worsening outlook on the continent, where growth is forecast by some analysts to fall as much as -24% in the second quarter as the bill for having become the epicentre of the global coronavirus pandemic comes in. Europe’s economy had already weakened notably before the virus ever appeared in China’s Wuhan and since then three of the Eurozone’s four largest economies have gone into a draconian form of  ’lockdown’.

“Today's economic data will be pretty much universally ignored but comments about joint Eurozone bond issuance won't be,” says Kit Juckes, chief FX strategist at Societe Generale. “With an economy in poor shape going into the crisis and with neither ECB or Governments looking truly joined-up (yet) it's not time to get bullish of the euro. It's likely to under-perform JPY. Over time, it will underperform GBP though there, positioning is a problem in illiquid markets and GBP/USD is obviously key from a psychological view in the short term.” 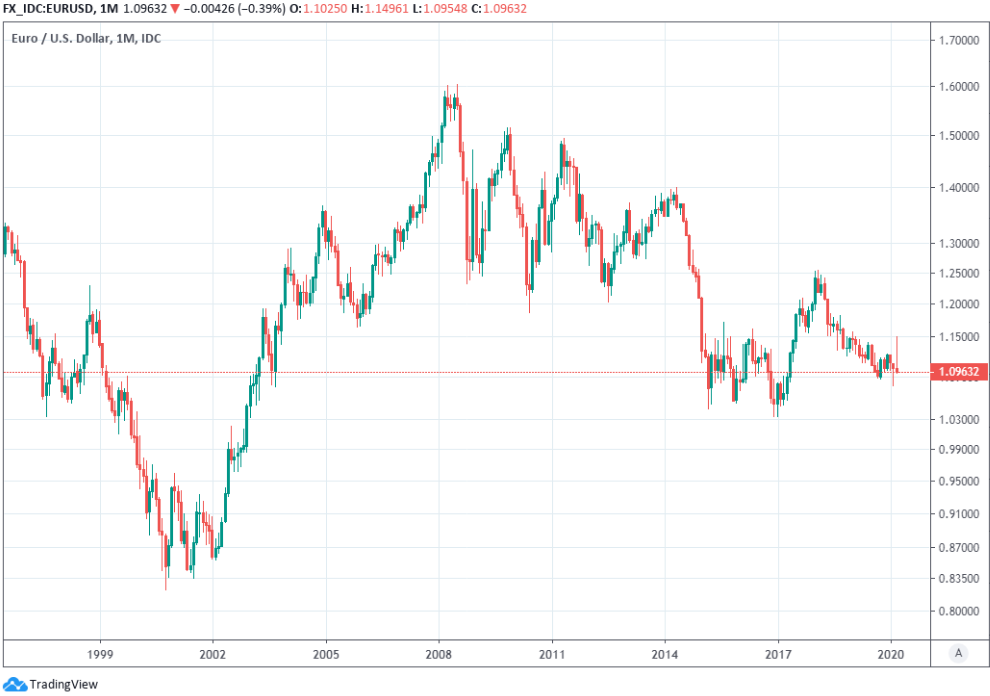 Europe’s fragile economy had been too far gone for central bank monetary policies to be able to stabilise it even before the coronavirus ever first arrived in Italy, the continent’s own epicentre, which had left the already-undervalued currency to do a lot of the heavy lifting for policymakers who’d run out of ammunition in the monetary space and kneeled for too long at the altar of austerity in the political arena. And now the Euro doesn’t have the cushion of the market’s once-weighty short trade leaning against it in the good times while lifting it in the bad, the single currency could be vulnerable going forward.

But the seeds of a longer-term recovery for the Euro-to-Dollar rate may now be being sown amid the outbreak of viral pneumonia that’s seen citizens largely confined to their homes under draconian enforced quarantines in Italy, Spain and France, which are likely to necessitate a policy response like no other seen before. German Chancellor Angela Merkel said Wednesday that she’s open to using “joint debt issuance” in order to combat the economic fallout of the virus, a past objection to which has long prolonged if-not prevented the deleveraging and reflation of the indebted ‘periphery’ Eurozone countries that have weighed so heavily on the bloc’s economic performance since the debt crisis of 2011/12.

Any decision to go ahead with "joint debt issuance," whether intended as such or not, would be a step toward a 'fiscal union' to match the 'monetary union' that was in the pipeline long before the official 1999 launch of the Euro. The absence of such a fiscal union, or risk sharing mechanism, is widely cited as being a substantial factor in the Eurozone's chronic economic underperformance and creation of one amid the wrack and ruin of a crisis might sow the seeds of a long-term recovery for both the economy and the single currency.