- Beware unexpected triggers that could shock markets back into life

Volatility in the Euro-Dollar exchange rate reached an all-time low this week, and dying volatility is being recorded in most other major currency pairs as we enter the final month of the year.

Exchange rate stabilisation might be good for those looking for certainty in making international payments, but for traders and those who want higher or lower rates, these are difficult times.

Typically when volatility is low trading brokerages report poor returns as traders are not tempted into taking fresh trades. Meanwhile, those looking to make more straight forward purchases of foreign exchange tend to sit on the sidelines waiting for better rates, or are pushed into their payment as the market turns against them.

In FX, the adage remains volatility is good and right now there is very little to be had.

One-month implied volatility for EUR/USD (which is a market expectation for volatility in one month's time) reached an all-time low this week at just above 4% annualised according to research from Nordea Markets.

"Where has all the volatility gone? That is a good question, given that uncertainty surrounding for example the trade deal is still elevated," says Andreas Steno Larsen, an analyst with Nordea Markets.

The EUR/USD exchange rate traded within 18-19 pips on Tuesday: "it’s hard, if not impossible, to find a tighter daily trading range over the past 20 years in EUR/USD," says Steno Larsen. 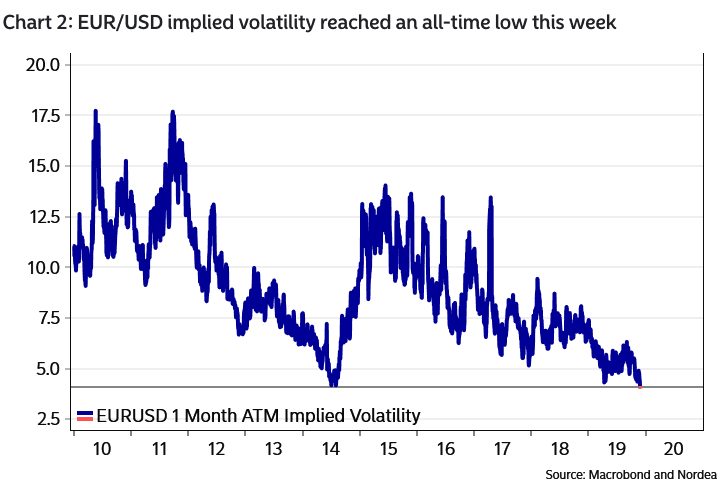 The flatlining in markets comes in what should have in fact been a relatively interesting week for global foreign exchange, particularly as concerns over the signing of a U.S.-China trade deal spiked after President Donald Trump signed into law a bill that offers support to the pro-democracy movement in Hong Kong.

Expectations for retaliation from China, and suggestions that the move by Trump could hinder the reaching of a deal provided ample uncertainty that would typically fuel foreign exchange volatility.

"November's EUR/USD range is the second smallest since 1999, beaten only by May 2011. Two of this week's daily ranges meanwhile are in the smallest 20 daily ranges ever. There's a Black Friday sale as anyone stuck long EUR/USD volatility tries to escape," says Kit Juckes, a foreign exchange strategist with Société Générale in London.

So what is causing the flatlining in exchange rates?

While there was some escalation in tensions on the trade war front this week, it must be noted China has not been as forceful in its response as it might have.

"The easing in US-China trade war tensions has brought implicit EUR-USD volatility to the lowest level since the introduction of the euro," says Thu Lan Nguyen, an analyst with Commerzbank in Frankfurt.

While global events of course have a part to play in suppressing volatility, perhaps the most significant underlying factor are central banks which have been pumping vast amounts of money into the global economy, thereby minimising the need for currencies to play their shock-absorber role.

"FX market volatility is usually compressed when the liquidity floodgates are open from central banks - the exact same pattern this time around," says Steno Larsen.

Fears of a global slowdown in 2019 has seen a host of global central banks 'turn on the taps', i.e. cut interest rates to support the economy. The Federal Reserve was joined by the likes of the Reserve Bank of Australia, the European Central Bank and the Peoples Bank of China in cutting rates.

But, central banks from Russia and Turkey to Kenya and Iceland also joined in the cutting spree; and the majority of cuts have been back-loaded towards the end of the year, a period that coincides with the current spell of lower volatility.

This in turn encourages a flood of fresh money into the global economy.

But for FX markets, they key lies with what the ECB and Fed are up to.

According to Juckes, the following graph provides a strong explanation for declining volatility: 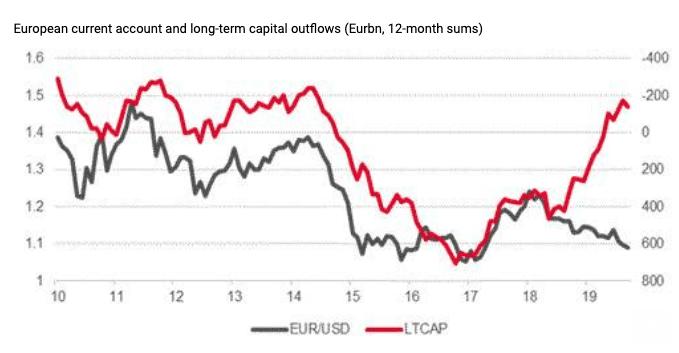 The chart above shows the EUR/USD and long-term capital outflows from the Eurozone, which Juckes says "sums up some of the current problem."

"On an annual basis, Europe is a net importer of long-term direct and portfolio investment, which once upon a time would have been considered extremely supportive of the euro.

"In 2014/2015, the ECB's adoption of negative rates and QE triggered a huge reversal in the balance of payments as investors were crowded out of European bonds, dragging the euro lower Now, the situation is completely reversed. And the euro is falling, albeit only very slowly."

"It seems clear that the reason for this is the surge in FX-hedged investment in Euro-denominated assets. Foreigners are long of longer-dated euro-denominated assets, mostly (but not all) hedged on a shorter term basis. By contrast, for European (or Japanese) investors, the flat US curve means that, say, hedging a 10year treasury with a 1-year FX forward eats up all the yield advantage of buying Treasuries in the first place."

What Could Turn Volatility Back on?

A spike in tensions between the U.S. and China would be the most obvious route to a return to volatility in global FX. To be more specific, volatility upside would most likely be realised should the two sides appear to be heading for a complete failure over striking a new deal.

"Only a surprising escalation in the conflict would be likely to jolt the market out of its lethargy in the short term," says Commerzbank's Thu Lan Nguyen. However, with China and the U.S. both showing a marked appetite for a deal, the odds of an escalation in tensions are remote at this juncture. "As long as the talks between Beijing and Washington continue and an interim agreement remains on track, market participants should remain relaxed."

But the biggest issue for markets remains central bank dynamics, and Juckes is looking for the market to be shaken by a change in settings between the Fed and ECB.

According to the analyst the market would need to re-think its current expectations about 2020 Fed policy. "Since September, hopes of more than 1 rate cut have been slowly receding," says Juckes.

So again, it doesn't appear that any hope for volatility will be found in the near-term.

Nordea's Steno Larsen says "it’s always tricky to forecast exactly when and how, but the market set-up is getting increasingly complacent by now."

Nordea Market analysts say a potential impeachment of Trump is another potential event that would have the shock factor required to spur markets into life.

"When we look for potential triggers for a correction, we cannot discard the distinct possibility that Donald Trump gets convicted in an impeachment case during 2020. Trump may very well be “impeached” but we see a very low likelihood that he is ultimately convicted by the Senate. Should Trump be ousted, we think the market would immediately question the “US outperformance” narrative that has been so strong through Trump’s president," says Steno Larsen.

"If Trump is convicted, a weaker USD, higher rates and a better Euro area versus US market performance could be on the cards," adds the analyst.