- But some handbrakes still holding it back

The Euro-to-Dollar exchange rate is forecast to rally towards the backend of 2020 by analysts at Wall Street-based Goldman Sachs, who see three key factors uniting to driver a stronger Euro.

Firstly, the single Eurozone currency is said to be undervalued by 15% according to models utilised by Goldman Sachs. This undervaluation is largely driven by the Eurozone continuing to run a Balance of Payments Surplus (courtesy of exports outstripping imports).

Secondly, participants on global currency markets are already engaged in extensive bets against the currency: "leveraged funds have run a EUR/USD short position of at least $10bn every week for the last year," says Zach Pandl at Goldman Sachs in New York. When markets are heavily committed in a one-directional bet, the prospect of a sharp and meaningful reversal grows as those bets are closed out.

Thirdly, interest rates at the European Central Bank appear unable to go much lower than current levels. (The rule-of-thumb in foreign exchange is that when a central bank is cutting interest rates, the currency it issues declines. Therefore, the ECB's already rock-bottom rates no longer become a drag on the Euro). 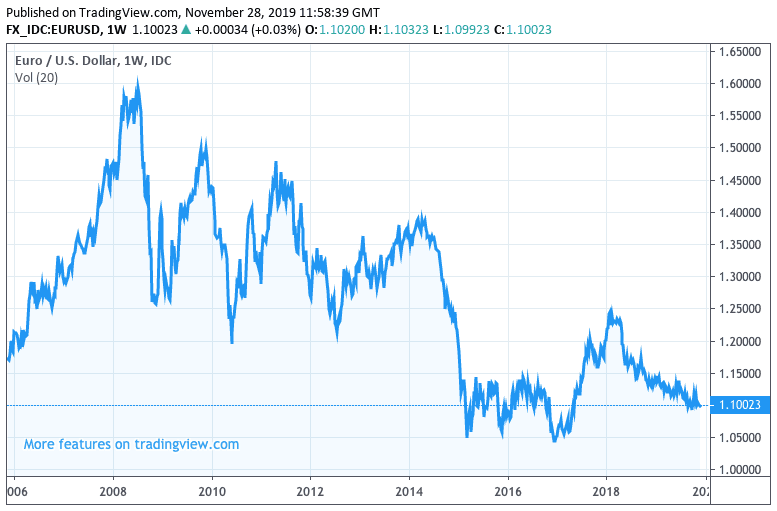 Above: A long-term view of the Euro-Dollar exchange rate

However, those expecting a rally in the Euro against the U.S. Dollar and other major currencies should exercise patience, strategists at Goldman Sachs say appreciation will happen, "just not yet."

"We think it will take more than valuation for investors to pivot to Europe, given headwinds to asset market returns," says Pandl.

Research suggests the Eurozone assets do not yet offer the kind of returns required to turn up the volume of investments into Eurozone assets, particularly when contrasted to U.S.-based assets.

"Carry is still punitive, at least at current volatility levels," says Pandl. Carry involves the borrowing of capital in one currency where interest rates are cheap, and investing in assets where interest rates offer greater return. The current rock-bottom interest rates in the Eurozone make the Euro an attractive currency to borrow in and fund U.S.-based investments, creating a demand for Dollars at the expense of Euros. It seems until this dynamic is altered, the Euro will remain under some pressure.

But it's not only money market investments that must be considered: holding stock market investments in the Eurozone, particularly when contrasted to the same opportunities in the U.S., does not offer attractive value. Goldman Sachs numbers show that since their respective pre-financial crisis peaks, S&P 500 earnings are up 86%, while Euro Stoxx earnings are up only 3%.

"Without yield and without earnings growth investors will struggle to generate medium-run returns in European assets, reinforcing the preference for Dollar overweights," says Pandl. "We think the Euro has upside, and forecast a rebound to 1.15 in 12 months".