- After failing to overcome key sloping trendline on the charts.

The Euro was on its front foot in the opening session of the new week but is vulnerable to losses heading into year-end, according to some analysts, who cite high U.S. bond yields, lingering trade tensions and political uncertainty as just some of the factors that could weigh on the single currency up ahead.

Europe's unified unit was buoyant Monday and the Dollar soft as markets responded to remarks from President Donald Trump at the weekend which suggested negotiators are not as close as previously thought to agreeing a deal that removes more U.S. tariffs from Chinese goods exports. Statements from China's Commerce Ministry had led investors to believe last week that not only could new levies due to go into effect on December 15 be cancelled, but also that some of September's tariffs may be removed.

"It was already glaringly clear Friday that the US and China were much farther from coming to terms on a trade deal than the market seemed to believe all last week," says John Hardy, chief FX strategist at Saxo Bank. "With the Asian session, it appears a bit more reality has settled in, with the US-China trade deal as uncertain as ever, the Hong Kong situation crescendoing once again, and Spanish elections reopening the populist-centrist fault lines as the Vox party jumps 50% from the recent election to grab 15% of the vote."

Trump's told reporters on Saturday that there's been a lot of incorrect reporting in the media about the state of the trade negotiations and that the "level of tariff lift" floated in the press is incorrect. He also said that he wants to "make a deal, but it's got to be the right deal".

The two sides have been attempting to finalise a 'phase one deal' Trump claimed on October 11 had already been struck, which has lifted global markets in recent weeks, although Trump's comments are a reminder to the market how quickly the mood between the world's two largest economies can change.

"In Europe, there's a lack of fresh economic news, but more Spanish political deadlock ahead. EUR/USD has failed to break the top of its downward-trending channel and looks vulnerable,. EUR/JPY even more so. It's a short here," says Kit Juckes, chief FX strategist at Societe Generale.

Trade talks have reduced investors' concerns about the U.S. economic outlook and prompted a rebound in American government bond yields that have themselves encouraged a continued bid for the Dollar, although the greenback had performed strongly before then because of the safe-haven demand generated by the tariff fight.

Rising U.S. bond yields helped keep the Euro under pressure and Societe Generale's Juckes says they will ensure the currency remains pointed lower in the weeks ahead, although technical factors on the charts are again coming into play for the single currency too. Karen Jones, head of technical analysis at Commerzbank, says that last week's downward move by the Euro has neutralised what was previously an upside technical bias.

"The market has now failed for the past 4 weeks at the 1.1180 level, however the intraday Elliott wave counts remain positive and for today we will reattempt tiny long positions. The move lower has neutralised the chart– it is unclear if the market will recover from here to the 200 day ma at 1.1186 and the top of the channel at 1.1269. Or if we will see one more final leg down to the base of the channel at 1.0865 and the 1.0814 Fibo retracement before sustained recovery is seen," Jones writes, in a morning note to clients Monday. 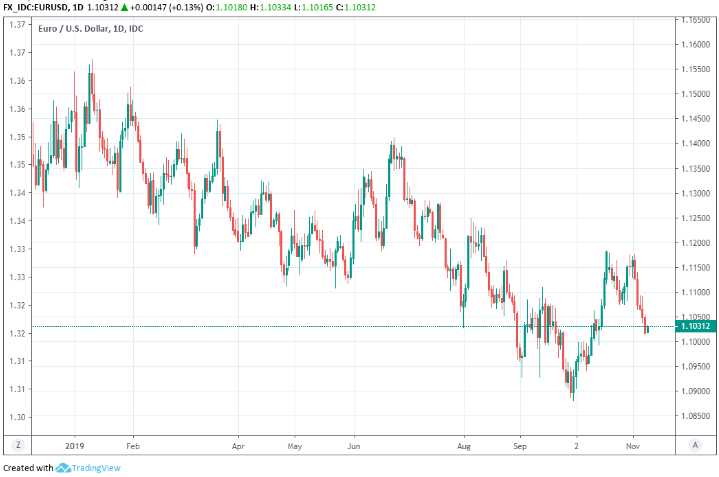 The Euro has rallied from 1.0880 in early October to 1.1180 this month but the single currency has repeatedly failed to overcome that level, which also marks the upper boundary of a downward-sloping trend channel on the charts. Jones told clients on Monday to buy the Euro-to-Dollar rate around 1.10 but has also advocated exiting the bet if and when the market reaches 1.1170, suggesting she's doubtful the trendline can be overcome just yet.

Jones, who studies trends and momentum on the charts rather than economic fundamentals, has warned the Euro could fall as low as 1.0814 over the coming weeks but says the coming weeks as it attempts to form a "base" from which it can launch a more sustainable recovery. She's not alone either because strategists in the chief investment office of UBS Global Wealth Management are forecasting the Euro-to-Dollar rate will hit 1.09 by year-end, although they too forecast a recovery next year.

"EURUSD has been unsettled by shifting sentiment on trade negotiations. The latest easing of tariff tensions has supported the USD, as it also led to a jump in US interest rate expectations. We still see downside in EURUSD this year on lingering trade uncertainties and maintain our December forecast of 1.09. In the longer term, we expect EURUSD to rise again.  The EUR should gain support as trade discussions calm next year in the run-up to US elections. We also expect the growth differential between Europe and US to narrow, which should support the euro," says Thomas Flury, a strategist at UBS.